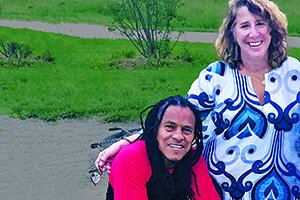 Tackling a Teachable Moment on Race


It’s the day after footage of George Floyd’s murder has made its way around the world, and Ra Frye, the Black director of Pride Roc, a trauma-healing process and program for recovering gang members on the South Side of Chicago, is holding a group Zoom call with Mary Jo Barrett, a white therapist, and some of the young men they work with together.

Zooming has altered the feel of the group’s weekly meeting, which takes place at Pride Roc’s home in Englewood and is a rather intimate, ritualized affair. Before COVID-19, the men would pass around a talking stick of sorts—perhaps a stone or a talisman of their choosing—and whoever held it was promised the floor. Listening was so sacrosanct that anyone who interrupted had to drop and give the group 25 pushups.

Frye and Barrett are the only ones exempt from the interrupting rule, but Barrett has always been careful about exercising that right. She’s concerned about overstepping her role, even though she’s been a part of the group for three years. This day, however, she’s anxious for someone to bring up George Floyd’s murder. It’s painfully clear to her that the group members need to process this blatant execution of an unarmed Black man by police, and their meeting only lasts so long.

As the clock on her screen ticks the minutes away, her frustration gets the best…

AWESOME!!! This was real life interaction, though in a therapeutic setting. I've had great trouble with my white experience, others telling me about myself and my ignorance of privilege and micro-aggressions. I enjoy and need feedback on my cultural position and behavior from others' cultural positions and perspectives, but telling me WHO I am and how I feel is the same as me taking for granted I know how YOU feel. This article was not judgmental. This real stuff was insightful. This is how I learn about myself and others, from either personal interaction or people describing theirs. I think it was C. Rodgers who said, people getting to know each other is where things happen (or something like that).