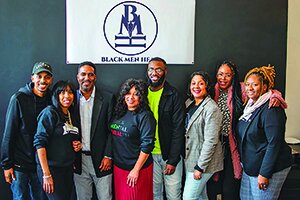 
Tasnim Sulaiman does her best thinking in a pair of sneakers, when her feet are pounding the Philadelphia pavement and the sun is rising over a city where, at eight o’clock, most people’s days are just getting started. But not Sulaiman’s. By this time, she says, her big ideas have already come into focus. And on one such morning almost two years ago, one of her biggest ideas yet started to take shape.

Sulaiman had been a couples therapist for nearly 13 years, working mostly with Black clients. In many sessions, she’d watch as husbands and boyfriends shut down, despite their partners’ fruitless pleading: “Say something—anything.” “Show some sort of emotion.” “Tell me what you’re really feeling.” It happened so often that even Sulaiman was starting to believe the played-out stereotype: most men came to therapy only when a significant other in their life dragged them there. And getting them to cooperate, to share, to do the work? Practically impossible. “It weighed on my soul,” Sulaiman recalls.

But in other moments, she saw glimmers of possibility. In individual sessions, where there was more room for them to speak, the men did open up. They said things—vulnerable things, about dreams, losses, and traumas—that she knew they wouldn’t dare speak about in front of their partners, friends, and families. Breakthroughs didn’t always come easy. But as Sulaiman says, “Taking a ride with men in therapy might be bumpy at first. You might not know where you’re going. But if you can stay on, it’s worth it.”

On this particular evening, it got her thinking. How can I help Black men overcome the barriers keeping them from therapy, like high costs and stigma? And those keeping them from communicating once they’re in treatment, like many therapists’ lack of cultural competency? Then it came to her: she’d create a coalition of Black therapists who’d donate an hour of therapy per week to Black men. Hopefully, these clients would go on to share their therapy success stories with others like them. The company slogan? Healed Men Heal Men.

In 2018, Black Men Heal made its debut, steadily gaining followers, first through a small social media campaign, then word of mouth, then local press coverage. In February, it caught the attention of former rapper and radio show host Charlamagne tha God, who became so enamored with the organization that he donated $10,000 and encouraged fans to donate as well. Steadily, the money trickled in—two dollars here, five there—with messages of support from ordinary Black families inspired by Sulaiman’s mission. Clinicians who wanted to volunteer followed. Today, Black Men Heal’s nearly 30 therapists, pledging eight free sessions per client, have provided more than 500 free therapy sessions to more than 60 men of color in Philadelphia. And they’re just getting started.

Of course, the organization’s success can be attributed to Sulaiman’s vision and determination. But it’s also emblematic of a larger shift in the way the public perceives the importance of mental health care. Free therapy is on the move, helped in part by the increasingly popular notion that access to mental health care isn’t just a privilege but a right, as important as any medical service.

Even corporate juggernauts like Starbucks have jumped on the free therapy bandwagon. In April, president and CEO Kevin Johnson announced that as part of the company’s benefits package, all employees and eligible family members would be given access to up to 20 therapy sessions per year. “Mental health is a fundamental part of our humanity,” Johnson announced, “and these resources will make a meaningful difference in people’s lives.”

But such sentiments don’t reflect the reality of mental health care accessibility. According to The State of Mental Health in America, Mental Health America’s annual report, more than 4.7 million adults—about 10 percent of all adults with a mental illness—were uninsured last year. While that’s fewer than previous years, almost a quarter of all adults with a mental illness reported that they were unable to receive the treatment they needed—a number that hasn’t declined since 2011. No wonder the movement to offer free therapy is gaining momentum.

Of course, this isn’t a new concept. For years, flagbearers like the Pro Bono Counseling Project and Give an Hour, founded in 1991 and 2005, respectively, have been providing services at no cost to those in need of help. But since the COVID-19 pandemic broke, free therapy offerings have taken on a new dimension. With the growing necessity of teletherapy and public anxiety at new highs, companies that usually charge for online services are choosing to waive fees instead.

In March, Talkspace, which offers counseling through online video and chat platforms, saw its user base increase by nearly 65 percent compared to the year before. Soon afterward, the company announced that it would be donating more than 2,000 months of free therapy to frontline healthcare workers and offer discounted subscriptions to all regular users during the pandemic. The company had experimented with similar campaigns before, offering three months of free therapy to approximately 200 members of the LGBTQ+ community in the aftermath of the 2016 Pulse Nightclub shooting in Orlando.

This time, more than 400 Talkspace therapists have participated in the free therapy campaign so far, says Amy Cirbus, Talkspace’s director of clinical content. Altogether, they’re donating an average of four sessions per person to nearly 1,000 frontline healthcare workers. “This was a no-brainer,” she says of the initiative. “We were seeing early on that frontline workers were very stressed. Naturally, when it came to offering free therapy, they came to the top of our list.”

In April, teletherapy company Thrivetalk also announced it would be offering free services to medical personnel and discounting rates for all other users. But unlike Talkspace, its larger, more established cousin, it doesn’t compensate its therapists for this part of their work. “Of course, these therapists have to make a living; they’ve got to eat,” says Prairie Conlon, Thrivetalk’s clinical director. “But they have backgrounds treating trauma,” she explains, “so they understand the difficulties healthcare workers are facing,” and are willing to make sacrifices in these unprecedented times.

Shortly after declaring a state of emergency, New York Governor Andrew Cuomo, in conjunction with the state’s Office of Mental Health, called on mental health professionals to volunteer teletherapy services to help essential workers, their families, and uninsured individuals manage emotional distress. More than 6,000 stepped forward. It even inspired a sister campaign in Ontario, where, using social media to get the word out, a small group of therapists recruited more than 450 clinician volunteers in only a week’s time.

Jennifer Mann, a social worker in midtown Manhattan, was immediately taken with the New York initiative, managed by the NYC COVID Care Network. She signed up online to assist, was assigned a supervisor, and waited to be matched with a client—a simple process, she says. But almost two months later, she still hasn’t heard back.

Since the matching process has been somewhat opaque, she worries about the client experience. “This is exciting stuff,” she says, “but I think some of these organizations need to be clear about what they’re promising. How many sessions are clients entitled to? Are therapists doing crisis management? If you’re doing free therapy short-term, how do you build a relationship with your client? How do therapists set boundaries? Make referrals? I think practitioners just need a little more guidance.”

Free therapy may sound utopian to some, but is it sustainable? Once the coronavirus disappears and virus-related anxiety drops, will the swell of free therapy offerings ebb to pre-pandemic levels?

But Jenkins says the campaign shouldn’t just be seen as a balm for coronavirus-related stress. Rather, she explains, it’s designed to address a multitude of disparities faced by African Americans that are exacerbated by the virus, including those in the healthcare system, criminal justice system, and workplace.

“We’re really concerned about the people who are carrying undiagnosed trauma on top of the weight of coronavirus,” Jenkins says. “It rang the alarm bells.”

The response was massive. On the campaign’s first day, BLHF received more than a thousand inquiries. Ten days later, almost 400 clinicians had come on board. So far, 285 therapist–client pairings have been made.

When asked if they’ll continue to offer free therapy after coronavirus abates, Jenkins was straightforward: “As long as communities of color aren’t able to exist equally in this country in terms of finances, we’ll get support to those who need it.”

But can therapists make a living doing free therapy without burning out? Black Men Heal’s Sulaiman says offering paid and nonpaid services is a balancing act. “We can sometimes feel trapped between the ideas of capitalism and service,” she says. “But it’s not a matter of doing one or the other. The therapists who signed up for the campaign did it because they believed in the mission.”

That said, she also has safeguards in place to make sure clients aren’t taking advantage of services. For instance, they’re allowed two appointment cancellations before they forfeit their free treatment slot. “If therapists are donating their time, they want to see clients who show up and value what they’re getting,” she explains. Overall, though, she says clients are committed to the work. In fact, more than half of Black Men Heal’s clients continue treatment with the therapist they’ve been matched with after their eight free sessions are up—and pay for it.

For Sulaiman, what first began as a few scattered thoughts on a balmy evening jog is having a big impact. And she hears about it, in letters from grateful clients, from thankful partners, from reconnected families, from therapists outside of Philadelphia who want to help, however they can, in London, Kenya, and farther away. Sulaiman knows the free therapy her organization—and many others like it—offers has broken new ground. “It’s beautiful,” she says. “We’ve started something that’s going to force the mental health system to change, so that clients—that Black men—finally believe the system is working for them.”

As far as she can see, the sky’s the limit.


Previous: Meeting the Moment
Next: In Consultation
Read 4719 times