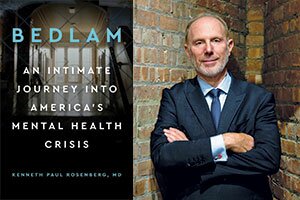 Out of Sight: Are Prisons Modern-Day Asylums?

"My family’s tragedy is an American tragedy. My family’s shame is America’s great secret.” That is how the psychiatrist, author, and documentary filmmaker Kenneth Paul Rosenberg begins his disturbing and deeply personal investigation into why our country seems unable to care for, and too often even care about, the estimated 11.2 million people age 18 or older who suffer from serious, debilitating mental illness. Bedlam: An Intimate Journey into America’s Mental Health Crisis is the title shared by his recently published book and his documentary, which received its premiere at the Sundance Film Festival earlier this year and is slated for broadcast on PBS in April. They both demand our attention.

A member of Rosenberg’s own family of origin was among the 20 percent of Americans who, according to the National Institute of Mental Health, experience mental illness. Growing up in Philadelphia, he watched his older sister, Merle, transform from a charmingly outgoing if also irascible adolescent into an increasingly erratic woman suffering from ever more frequent psychotic episodes, which included paranoid and hallucinatory rages.

Hospitalizations, psycho­therapy, medications, shock therapy—even when these treatments helped, she refused to stay with them, sometimes because of the drugs’ side…