In Search of New Ideas 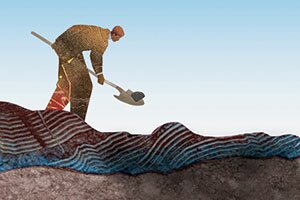 In Search of New Ideas

My Evolution as a Therapist


My love affair with psychology began in the late ’50s with an undergraduate field trip to Creedmoor Hospital in Queens. The walls were gray and foreboding, but none of that mattered as I sat mesmerized, watching a staff psychiatrist interview a bipolar patient. He announced that the interviewee was a manic-depressive suffering from delusions of grandeur. My first shock was that he proclaimed this openly, as if the patient had neither ears nor feelings. Furthermore, it was clear that this way of “exhibiting” inmates was typical.

As evidence of the patient’s delusional state, the psychiatrist noted that the patient had gone out one afternoon and purchased 10 automobiles. At this point, the patient interjected, pointing out that these were Fords—had he been grandiose, he would’ve purchased Cadillacs. His comment elicited laughs from everyone in the room except the psychiatrist, who remained straight-faced. The patient went on to indicate that although he’d planned to give these cars away to relatives, that deal was off, now that they’d had him committed.

Later in the interview, the psychiatrist asked the patient whether his medications were helping. He replied that if they were, it would be a modern miracle, since he wasn’t taking any of them; however, he added with a wink, the wastebasket seemed remarkably improved. Again, laughter from the group, dismay from the interviewer.

[Jay - as a kid in the '50s, we went past Creedmore on the way to my grandparents. It was just as you described.] PROPOSAL: Psychotherapy is in the unsettled state it is because it has yet to "find itself." That is, it may be said to be in the same emergent state that chemistry was before the formulation of the Periodic Table; before medicine discovered microorganisms and then antibiotics; and biology before Darwin and the later discovery of DNA. Each of these advancements may be said to have occurred when each of these sciences acquired a more effective understanding of its subject matter; i.e. that which it purported to study. HYPOTHESIS: Psychotherapy is in such an emergent state because it has yet to effectively understand its subject matter. SUPPORT FOR THIS STATEMENT: In the psychotherapy literature there is no consensus for (a) why or how psychotherapy works; (b) for why some therapists are more effective than others; (c) for why emotional processing is effective and when it is not; and (d) for why empathy, though it has a high correlation with a productive outcome, is effective and when it is not. IMHO, psychotherapy finds itself in this emergent state because it has yet to effectively enough understand its subject matter, which is here proposed as the client's experiencing. PROPOSED NATURE OF THE CLIENT'S EXPERIENCING: For the typical client, the following is assumed to apply: (a) Any symptom/problem has an interpersonal or psychogenic origin; (b) the unresolved aspects of such an event are stored in a "frozen" state as an imprint; (c) the client provides a more accurate description of the effect of such events than any concept; and (d) the most effective remedy for such experiences (see (a)) is my concept of therapeutic catharsis (TC) (See PN, May/June 2012, and articles on PsycINFO). TC is based on the assumption that there exists a natural healing process for what I have termed a psychological "injury." The facilitative condition for TC is the unforced/unprovoked activation of the client's emotional experiencing, which occurs coincident with the client receiving sufficient support for what he/she has been experiencing. Emotional experiencing that is forced/ provoked is not considered as therapeutic because it does not allow the client to gain access to the unresolved "injury" in the imprint. Support for the client's experiencing is, typically, for the explicit and implicit dimensions of that experience. The latter, or the not-yet-verbalized, dimension is typically the most significant because that is where unresolved hurt starts to emerge into client's awareness (This is what Gendlin means by a "felt sense"). It is safe to assume that given the assumption that this material was too "hot" for the person's nervous system to process at the time, that it emerges at a pace governed by the nervous system; i.e. it will release just enough at any given time to avoid overloading the natural healing process. It is of the utmost importance when supporting the implicit dimension that therapists do their best to not DISTRACT the client's attention from their sense of their experiencing. For example, an effective empathic response will result in the client responding in a way that may be characterized as, "Oh thank you! I was just about to say more about that." An ineffective empathic effort is usually responded to with silence, or an ambiguous response that may be understood as, "Thanks for trying, but you're way off the mark." This characterization of the therapist's behavior implies that that person is just a "mid-wife," someone who tries to create the facilitative conditions for a natural process to operate, and it requires that person's most exacting attention. Why? Because the best the client may be able to do is "to point to the back of her/his neck with his/her elbow" (Jackins) to say that this is how I am hurting. A further implication is that the way the therapist interacts with the client is the "method of treatment." A concluding comment about EMDR (referred to by Jay) as well as all other therapies that at least try to offer support for the client's experiencing. There are many examples/references to clients in many different therapies having a "good" cry. For example, see Shapiro, F., 1989. A young woman who upon remembering having been sexually molested as a young child suddenly burst into "deep sobbing for 11/2 minutes," and stated upon asking how she felt, exclaimed, "I feel like I've been exorcised!" Foa, in articles on imaginary exposure, which allows the client control the pace, there's many examples of deep crying. One may say here that psychotherapy has had great reluctance in appreciating how "stubborn" the deleterious effects of psychologically hurtful events can be. I learned all of the above because it was dumped in my lap. A client asked for several hours of therapy a day for several days a week for six weeks. (For the full story, see Jessica: The autobiography of an infant, Kindle ed.)