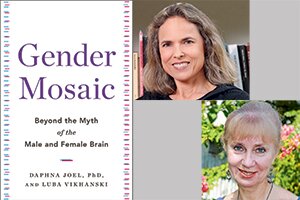 The Myth of the Gendered Brain: What the Latest Science Tells Us


Review: Gender Mosaic: Beyond the Myth of the Male and Female Brain. By Daphna Joel and Luba Vikhanski. Little Brown Spark. 216 pages.

Cultural stereotypes can have long lives. Many of us might have hoped, for instance, that the misnomer that male and female brains come preprogrammed with gender-defined intellectual aptitudes, personality characteristics, and interests would’ve long since disappeared by now.

But as recently as 2017, Google engineer James Damore brought back the canard in full force. He wrote a memo that soon went viral, citing inherent biological differences as the reason that women weren’t suited for science and tech jobs. Inborn sexual difference, rather than sexual discrimination, he asserted, was the actual reason for the presence of so few female software engineers in Silicon Valley. His comments echoed the 2005 utterances of Lawrence Summers, then president of Harvard University, who attributed the dearth of women in top science positions to what he called “issues of intrinsic aptitude.” In both cases, biased stereotypes about the relative inferiority of women’s brains were being casually spouted as fact.

But what are the facts? Enter Gender Mosaic: Beyond the Myth of the Male and Female Brain, in which neuroscientist Daphna Joel and coauthor Luba Vikhanski present a rich body of scientific research to disprove and…