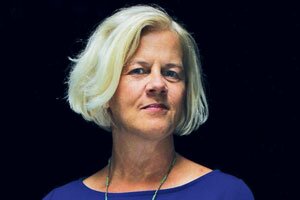 An Interview with the Author of Dopesick


After journalist and author Beth Macy finished writing Dopesick, her sweeping examination of the origins and impact of the opioid epidemic, she found herself in what she describes as a “very dark place.” In her book, she weaves together the different strands of the larger story of how the opioid crisis came about—the loss of economic opportunity in small factory towns across America, the greed of pharmaceutical companies seeking profit with no concern about the safety of their products, the despair of people who can find no hope for their future. Immersing herself in a subject filled with such pain and despair took its toll. “After hearing story after desperate story, it begins to creep into you,” she says. “You develop your own secondary trauma.” She decided that she never wanted to write about opioids ever again.

Then, as she began speaking about her book in the media and in communities around the country, she realized that she had something more to offer than just stories of despair. She could practice what she calls “solution-oriented journalism,” passing along what she’d learned about the creative ways some communities have responded to the opioid crisis and the approaches to treatment that have been proven to work. She became an activist, taking aim at government indifference and the unscrupulous marketing methods of drug companies, while offering hope and dispelling the stigma that’s stood in the way of progress. “Doing that has helped me climb out of…