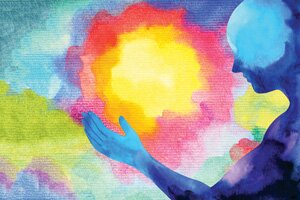 
On a cool Santa Cruz evening four months ago, therapist Dick Schwartz found himself crouched on a yoga mat in a friend’s living room, about to do something crazy. At least, that’s what some of his more buttoned-up colleagues might’ve thought. He’d met Bob Grant at an Esalen workshop several years back, a rising star in the field of ketamine-assisted therapy. Almost four decades earlier, Schwartz had developed Internal Family Systems (IFS), a therapeutic approach that involves dialoguing with our inner psyches, and he believed that ketamine, a longtime dissociative anesthetic said to have a quick-acting antidepressant side effect, was the key to taking his personal IFS work to the next level.

As Grant lit a fistful of sage and invited various invisible spiritual guides to join them in the room, he reassured Schwartz that he’d be beside him the whole time. Was he afraid, Grant asked? Schwartz shook his head and took a deep breath. Then Grant stuck a ketamine-filled syringe into the meat of Schwartz’s upper arm, and squeezed.

Within minutes, Schwartz became completely unaware of his surroundings. He entered another realm, he says, a blissful place, where his defenses crumbled and his heart opened up. The everyday problems we deal with, he suddenly realized, might seem all-encompassing, but they aren’t everything. “As the Buddhists would say, I felt less attached,” he explains. The hour-long experience seemed to end as soon as it began. Although he…