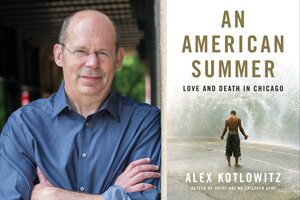 Where the Trauma Never Ends: Inside Chicago’s Urban War Zones

In the United States, black males ages 10 through 19 are nearly 19 times as likely to be murdered than white males of the same age, and are at a comparable risk of being killed as adolescent boys in war zones like South Sudan.

I’d come across that staggering number while writing a piece about the 2017 UNICEF report on global violence against children, and it inescapably returned to mind as I read An American Summer: Love and Death in Chicago by Alex Kotlowitz, a book that could not have more chillingly brought this statistic to life.

Without traveling to a foreign conflict, Kotlowitz has made the urban war zone of Chicago’s poorest neighborhoods his career beat. This is his fourth book focusing on the cumulative psychological and physical toll endured by families and communities caught between entrenched poverty and street violence. His best-known work is the deservedly acclaimed There Are No Children Here: The Story of Two Boys Growing Up in the Other America, published in 1992. There he follows the childhood and adolescence of Lafeyette and Pharoah Rivers, whom readers first meet when the boys are 11 and 9 and already wondering if they’ll survive until adult­hood, and weighing the consequences of joining, or avoiding (and if so, how), the drug and gang culture…