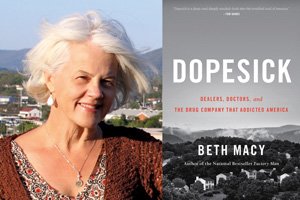 The Scourge of Opioids

In August 2016, author and journalist Beth Macy traveled to the Hazelton Federal Correctional Institution in West Virginia to interview convicted drug lord Ronnie Jones. He’d run one of the most extensive drug rings in the mid-Atlantic region, and his business had helped fuel the area’s spiraling overdose rate.

Macy, who lives in Roanoke, Virginia, a small-sized city adjacent to both the scenic Blue Ridge Mountains and the economically distressed former coal towns of Appalachia, was reporting on the devastation caused by the opioid epidemic, which had led to the deaths of more than 300,000 Americans over the previous 15 years. But beyond the astonishing numbers, she was carrying with her countless stories from grief-stricken mothers struggling with unanswered questions she was intent on posing to Jones. How could their children, some barely out of adolescence, have gotten so swept up with these drugs? How did their brains get so hijacked that they’d lie, cheat, and steal from their own families to score a fix? And why was effective treatment almost impossible to find, much less afford?

Perhaps predictably, none of that concerned Jones. From his point of view, jail time was just the price of business—and given the speed at which other dealers had already stepped in to replace him when he was arrested, that…