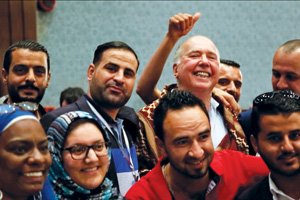 When Disaster Strikes, Jim Gordon Gets to Work


While moving away from trouble seems like a fundamental human instinct, Jim Gordon has made it his life’s work to head in the opposite direction. In the many thousands of miles he’s traveled over the last 25 years, his usual destination has been a site of massive dislocation, the kind of place most of us prefer to read about in the comfort of our homes. Much of his year is spent in chaotic locales where people have been uprooted and stripped raw by the forces of war, sudden violence, or natural disaster. Merely getting to such places can be an arduous challenge, but once there, his work just begins.

Gordon’s mission is to educate and empower people to calm their own overloaded nervous systems, so they no longer need help from professionals like him. His ultimate goal is to make himself irrelevant. His success is measured by the degree to which he leaves behind a community that can take charge of its own healing process, via mind–body practices such as meditation, biofeedback, guided imagery, breathing exercises, and expressive dance. With a team of therapists and other health experts from his professional home, the Center for Mind-Body Medicine (CMBM), he’s worked in war zones, refugee camps, the sites of natural disasters, and communities struggling to cope with mass shootings, both in the United States and internationally. He estimates that he travels two or three weeks out of a month, and he has no plans to slow down.