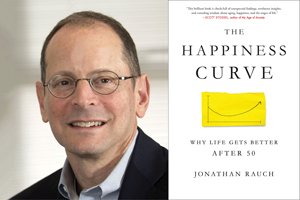 The U-Curve of Happiness

I spent a long time pondering why The Happiness Curve: Why Life Gets Better after 50 by Jonathan Rauch didn’t make me as happy as I’d hoped it would. After all, it offers a useful road map for identifying and normalizing some of the disquiet and anxiety that can overwhelm us in midlife, sometimes to the point of crisis. Moreover, its central message is—well—a happy one: if you find yourself suffering through a gloomy midlife slog in your 40s, just hold on. More likely than not, you’ll find a brighter landscape in your 50s and 60s.

That’s the gist of the U-curve theory of happiness, which Rauch features at the center of his book, a concept so simple it can be summed up with an emoji. Look at a smiley face and imagine it as a graph charting the arc of your perceived happiness from your 20s through your 70s. The rest is Rauch’s commentary.

As he explains it, starting in the early 2000s, researchers began noticing a curve resembling a smile as they plotted the results of large longitudinal studies that aimed to measure levels of individual well-being and satisfaction across the respondents’ lives. The data—which came from hundreds of thousands of men and women from around the world—told a story whose chapters roughly divided into decades. Most of us start off happy and optimistic in…