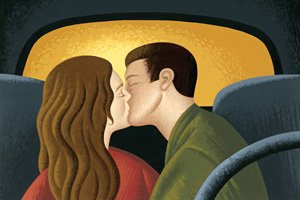 
Here’s what I know,” the Facebook message began, days after I’d asked after her. I braced myself before reading on. It had been 40 years, after all, since our high school days in the lackluster confines of life in Buffalo, New York. But she’d always been the bright spot, the kind of girl I’d dreamed about since the age when dreaming about females had become somewhat of a compulsion.

Perhaps that’s why memories of my time with her, pushed so deeply into the recesses of my memory, still swirl in a mixture of fact and fantasy, especially one evening that continues to linger all these decades later. Even now, it reflects how I saw her and how I wanted to see myself—worthy of someone like her.

She was mature, graceful, poised: an iconic presence among us awkward teens. At a time when the rest of us were struggling with inconsistent growth spurts and grotesque acne outbreaks, she remained a bastion of perfection, impossibly gorgeous, and accessible, at least as a friend. She had an older boyfriend, but mostly spoke of him as some distant and complex figure, often referring to him only by his last name. “Gundy told me I looked fat,” she’d say to me between classes. “Fat?!” I’d balk with appropriate horror. “No way!” Her laugh came easily, and her auburn hair tossed forward as she chuckled.

As burgeoning thespians, we were in some plays together. She was never great at acting, but she could take over a stage with her confidence and grace, and simply own any scene she was in. I don’t recall we ever played opposite one another as love interests, but in retrospect, that’s probably for the best: I don’t think I could’ve handled it. In fact, I can envision the story in the local paper: “Fatal Heart Attack during School Play. Boy leaned in to kiss female lead and dropped to floor immediately, according to eyewitnesses.” Not a dignified exit, to be sure. So we were “just friends,” at least until spring of our senior year.

I’d just completed a two-week run of Carousel, the venerable warhorse musical crafted by Rodgers and Hammerstein. I played Billy, chewing the scenery with gusto during “Soliloquy” and the death scene near the end of the show. I can’t remember if she was in it, but she may have had a minor role. She was always around for theater activities at any rate. We started seeing each other shortly after for two reasons: she’d broken up with Gundy (again) and my confidence had gone from nonexistent to emerging in the wake of the success of the show. Why not quickly parlay that triumph into some benefit? I thought.

So to the shock of all my friends, I asked her out on a date, the most popular, desirable girl in school. I kept it as quiet as possible, but word leaked, as it always does in high school. I begged my older brother to let me borrow his car, a cool white Triumph Roadster, for the appointed evening. Normally, he’d have said no, but even he was aware that I’d clearly out-kicked my coverage with her, and offered his wholehearted support: “One scratch on the car, you’re dead.”

After carefully navigating the streets in my brother’s car, I arrived at her house, which was much bigger than mine and in an opulent section of town. She came to the door wearing a simple sweater and skirt, unassuming and elegant. I held my breath for a moment and gazed at her, noticing in her eyes a slight sadness that had never been evident to me before. Perhaps I should’ve had the presence of mind to ask her about it then, or at least remembered to inquire later, but my anxiety had taken over, overwhelming any capacity I had for insight or observation.

In fact, I have no recollection of how we spent that evening, until I pulled back into her driveway at the end of the night. My memory of that part is clear and crystalized. Sitting awkwardly with the shifter and console between us, I turned toward her. Thankfully, my look must’ve conveyed enough, because I wouldn’t have been able to find any words given my butterfly-infested belly. Leaning in, our lips met, and we kissed warmly and affectionately, if not passionately. It’s a kiss I’ll never forget, as simple and elegant as her, the girl of my dreams—or “woman” rather, as that’s what she was to me, even though we were the same age. After, I walked her to the door with humility and thanks. She kissed me again as we said goodnight.

Days passed, and then weeks. I heard from friends that she was back with the older boyfriend, and in the code of teendom, as well as a desire to avoid Gundy’s wrath, I backed off. On graduation day—she was the only one who made that robe look like an elegant garment—we shared a fleeting, meaningful glance and nothing more. I never heard from her again.

Social networking had already become passé by the time I decided to get on Facebook, amassing a meager 52 “friends” after several months on my site. But one day, I started receiving messages from a number of high school friends I hadn’t heard from in decades. It began with a post from our former student council president, who’d apparently made a career of running for office. A people person to his core, he connected us all on a group page, which sent me on an exploration of everyone’s profile, including current pictures (occasionally horrifying, sometimes jealousy inducing), relationship statuses (wow!), political leanings (I had no idea we were this consistent!), favorite quotes (usually obtuse), and children (best part of the whole thing).

Then came the old photos: our fourth-grade class, epic snowstorms that buried the front steps of the school, several of the plays I’d appeared in over the years, and one of her on stage with me in an early high school production. My heart blipped as soon as I saw it, and I smiled, remembering with fondness the girl-woman I’d known and that special, albeit brief, moment we’d shared. Underneath the photo, a classmate had written, “Look at her, so poised and mature, so popular, even in ninth grade!” Another chimed in to ask, “What ever happened to her?” And another replied, “I heard she passed away several years ago.” “How sad,” commented another.

I sat at my computer, staring at the keyboard. Finally, I managed to type, “I’m stunned. Does anybody know what happened? I adored her.” I couldn’t believe my own audacity. How could you “adore” someone from such a distant time and place? I argued with myself, on the verge of tears. Because you did adore her.

Turning to Google, I searched frantically to find anything I could about her life after high school, but I came up empty at every turn. At one point, I thought she might appear under the married name of Gundy. Nothing. An obituary in the Buffalo News offered some unsatisfactory illumination: “Died, November 6, 2007. Donations to Hospice of Western New York appreciated.” Cancer? Probably. But how? And why her original name? Hadn’t she ever married? I hung my head in fatigue. After three hours of searching, there was nothing more I could learn.

Days passed. Then, from nowhere, a note from a mutual theater friend popped up in the inbox. “I know she meant a lot to you,” it began. “I can write more later about what happened to her if you wish.” I wished. I wished so much that my heart began to pound against my breastbone in anticipation. I waited impatiently for her response, but none came that night. It was several days more before I heard back from her.

“Here’s what I know,” she wrote. “I was volunteering in the hospital emergency room, and a disheveled ‘bag lady’ approached me and called my name. It was her. She was extremely thin, and obviously a cancer patient. She lived in a federal home on the east side, sort of a halfway house for destitute adults.” My heart sank: destitute?

“She carried grocery bags filled with prescription pills, odd food items, and a few clothes. I bought her some hot chocolate, since she was chilled, and her hands shook so badly, it was difficult to watch her try and drink it.” My hands, too, began to shake reflexively. “She said she had pancreatic cancer and was told she had three weeks to live. She acted so thrilled to have someone remember her. Her memory and mind were very sporadic.” My God, I thought.

“When I had to leave, I hugged her, and she burst into tears. She said it was the first hug she’d had in years from a friend, and maybe it would be her last.” My face began to crease in pain. “She’d been out of contact with her family, and her faculties were obviously altered. I found out she died two weeks after I saw her.” I held my breath until I was aware I might pass out, and then read on. “Please keep in touch. To renew old friendships is priceless.” I silently pledged to keep the promise.

As I reflect on those times, I can’t help but wonder whether I might’ve noticed more in her sad eyes had I not been so blinded by my infatuation with her. But how could anyone have anticipated how things would turn out—for any of us? Who knew, for instance, that the thespian boy who relished being on stage would end up a therapist?

Fortunately, my life has been marked by the intense love and gratitude I feel for my family, despite our many challenges. I wonder if she ever experienced that herself, or if there were ever moments, however fleeting, that she remembered our brief evening together. I think I’ll always be haunted by the image of her dying alone and destitute, but at times, especially when enveloped by the old, special friendships I’ve now rekindled, I’m able to let that be eclipsed by the memory of the elegant, beautiful girl I was somehow able to kiss in the front seat of my brother’s car.

Richard Holloway, PhD, is a professor, associate chair of the Department of Family and Community Medicine, and associate dean for student affairs emeritus at the Medical College of Wisconsin. He maintains a practice as a licensed marriage and family therapist.

Tell us what you think about this article by emailing letters@psychnetworker.org.

What a poignant story. Each person who has one of those “long lost meaningful” people understands how much the connectivity means.