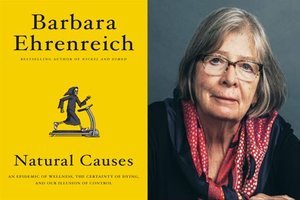 When Is Enough Enough?

Recently, it became clear to me just how accustomed we’ve become to ever longer life spans when a fitness instructor I know complained to me that her father had died too young. “He was only 80!” she announced in an aggrieved tone.

Her words kept replaying themselves in my mind as I read social critic Barbara Ehrenreich’s latest book, Natural Causes: An Epidemic of Wellness, the Certainty of Dying, and Killing Ourselves to Live Longer. The 76-year old Ehrenreich, a breast cancer survivor who received her initial diagnosis and treatment in 2000, no longer bothers with cancer screenings or other preventive medical procedures. It’s not that she’s suicidal or severely depressed, she insists: it’s that she’s come to realize she’s grown “old enough to die.”

It’s as sobering a reckoning with mortality as I’ve come across. But from Ehrenreich’s viewpoint, this recognition has freed her to take charge of her time in a new way. She can now choose to take a walk outside, rather than sit in an airless medical waiting room. Instead of being enslaved to unending medical appointments, she’s empowered herself to say no to incurring “any more suffering, annoyance, or boredom in the pursuit of a longer life.” Rather than fussing over various cholesterol-lowering meds or chasing…