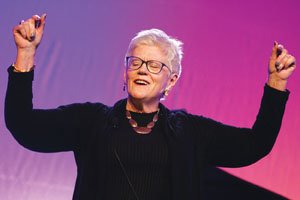 After you’ve been through years of killer depression and agitation that escalate into repeated interventions, it’s impossible to ignore how much you’ve taken your family along for the ride.

By the time she was in college, my daughter Keara’s optimistic cheerleading approach to my illness had exhausted itself, leaving her weary, angry, and cautious.

As a psychologist, I knew this made perfect sense. As a mother, it broke my heart.

After an especially vicious and snowballing episode, a friend who was a big shot at a prestigious New York City hospital encouraged me to enter a program that was studying certain aspects of ECT. The good news was that it was free. The bad news was that I’d have to commit to six months on a locked inpatient unit.

To get to the hospital, my husband and I drove from Virginia to New York, where we met Keara, who was going to school there. Together, the three of us approached my new home, which lay beyond a big, scary, gray door with a small, dirty, mesh window. It was hard to see in or out of it.

After the grand tour, Keara made it clear how much she had going on at school, the subtext being that I shouldn’t expect much from her, even though we’d be in the same city.

There were three basic groups on the unit: the heroin addicts, the eating disorder girls, and my spiritual sisters—the dowdy women of a certain age who wore long, boring skirts and no makeup, and had unfortunate hair and a demeanor that screamed, I don’t give a shit!

The heroin addicts—all tattoos and piercings—looked like they’d be packing heat if you met them on the street. But I loved them. They painstakingly explained to me how to rob parking meters and laundromat machines. They were the ones—the only ones—who saw how rocket launched I was coming off Xanax, which was a precursor to starting ECT. Seeing me struggle, one guy took me aside and whispered, “Mami, we could hook you up for free.”

The eating disorder girls were always on the lookout for the good mother, but they let me know that they’d feel a lot better about me if I lost 80 pounds, and they were full of ideas—some of them really disgusting—about how to make that happen.

Keara visited almost every week, bearing wicked treats from the West Village cupcake paradise of Magnolia Bakery, and engaging in sometimes fluid, sometimes stilted conversation. Knowing I was safe and taken care of by other people for once seemed to comfort her.

About three months in, at an emergency community meeting, the staff made a stunning announcement. Because a patient had broken a CD the night before, and had used the shards to cut her legs, all CDs and CD players would be confiscated. We captives went berserk with indignation and helplessness.

These weren’t childish tantrums about forbidden toys. We needed those CD players! Plugged in, they transported us outside the hospital. They were a profound comfort, which helped us feel private and autonomous in a place where we were neither.

The next day, in an effort to lift our mood, our beloved recreation therapist, Luis, proposed having a karaoke night with all the other units. When he didn’t get a rousing reaction, he emphasized that we could perform in groups. We could choose our songs, dress up, wear jewelry and makeup. And if we were feeling ambitious, we could throw in some choreography. We were welcome to invite friends and family to be our audience.

Not everyone participated. The heroin addicts couldn’t because they were restricted to the unit, and most of the eating disorder girls wouldn’t because it overlapped with that day’s episode of America’s Next Top Model. That left the depressed middle-aged ladies, of which I was one, to represent the unit, with a few of the girls delighted with the assignment of giving us head-to-toe makeovers.

God knows who originally suggested it—frankly, it’s possible it was me—but we chose to sing “Cruisin’” by Smokey Robinson, a guy who sounds like he gargles with honey.

Baby, let’s cruise; let’s go away from here.Don’t be confused; the way is clear,And if you want it, you got it forever.This is not a one-night stand, oh baby. . . .

Even though I was convinced she wouldn’t attend, I decided to invite Keara, and standing there cringing on the phone at the nurse’s station, I was amazed when she casually answered, “Yeah, Mom. What time?”

Admittedly, the ladies and I could’ve done more practicing in the few days before our performance. But every time we’d start, we had to confront the painful reality that we truly sucked, at which point one of us would quickly say, “Okay, that’s good enough for now. Let’s pick it up in a few hours.” And that never happened.

Even if our performance didn’t improve, thanks to the girls, when the big night rolled around, we middle-aged ladies looked 200 percent better than we had before. Using words like base and exfoliant with relish, the girls—attacking their collective assemblage of creams, colors, and brushes—were swirled into action, eventually applying so much eye makeup I could barely lift my lids to see. By the time they were finished with me, I wasn’t even wearing any of my own clothes.

The evening’s opening act was a totally atonal guy who had schizophrenia and performed a hip-hop song while never moving an inch. Next came a lovely waif of a girl who sang Louis Armstrong’s “What a Wonderful World.” Before I could choke on the heartbreaking irony of that choice, it was our turn.

I was ready to flee—and then I saw Keara. She looked bemused as my confederates and I clomped up the stairs to the dreaded stage and launched into our song.

To say we were terrible is an insult to the word terrible. We sucked the libido out of that sexy song. One of the women had the screechiest, highest-pitched voice I’d ever heard. Another got so anxious she forgot the words were on a screen right in front of her and started making up her own lyrics. There was no hope that harmony would be realized. We sounded like a pack of little dogs yapping at each other.

Quickly forgetting the “less is more” philosophy of watchable performances, we launched into the dance part of the routine. If there was a question about whether any of us had even a modicum of rhythm, that was settled as we slammed into each other while trying to execute our moves. The fiasco seemed to go on and on, the music continuing, as if Luis kept cuing our song up over and over.

Mercifully, the speakers finally went silent. A sparse handful of people pitied us and clapped as we took the walk of shame back to our seats. Feeling as mortified as I’d ever been, I gazed squarely at the floor tiles as I managed to put one foot in front of the other. The fact that my daughter had witnessed this humiliation just ramped it up.

Then, all of a sudden, Keara was there, blocking the route to my seat and pulling me back to stage. She pointed to a Human League song from the ’80s on Luis’s playlist: “Don’t You Want Me, Baby?” (It’s a question on its own that’s got to be worth at least a year of therapy.) I gave her a look that screamed, Are you kidding me?! But I allowed myself to be led by her.

As I mumbled the lyrics on the screen, she belted them out. And as she brought the crowd to life with her dancing—God, she had moves I certainly had never taught her!—something suddenly let loose in me too. I let myself sing. And I let myself dance.

It all happened in an instant—or was it a lifetime? In those few moments, out of nowhere, Keara and I shared a bond of pure, improbable joy.

As we walked back to the unit, arm in arm, we were sweaty and laughing. Keara’s cheeks were red and her long, auburn hair was wild around her face. After Luis gently separated us at the big, gray door, I watched her walk away until she finally waved and disappeared around a corner.

By the end of my six months on the unit, the ECT had muted my depression and agitation . . . until the next time, and the time after that. I now know that for me, there are respites from my bad spells, but not cures.

I’m one of the lucky ones: I’m well-loved, and over the years, I’ve come by a bag of tricks that help me. But sometimes I still have to do everything I can just to keep on going. It’s as simple and complicated as that.

Over the intervening years, my daughter and I have lost and found each other many times. Our travels have been bumpy, exposing all our vulnerabilities. It’s never perfect, is it? But whatever our ups and downs, we keep coming back to each other.

Remnants of that crazy night have sustained me for a long time. I’ve come to know something very important—that Keara and I are karaoke. Together, we know how it feels to be awful or brilliant, often at the same time. And we’ve taught each other that love never feels as real as when it mixes with sorrow and joy.

Martha Manning, PhD, is a writer, clinical psychologist, and former professor of psychology at George Mason University. She’s the author of Chasing Grace: Reflections of a Catholic Girl, Grown Up, The Common Bond: Mothers Daughters and the Power of Empathy, and other books. Her work has appeared in numerous publications, including The New York Times Book Review and The Washington Post. She’s also performed at three Moth storytelling events.