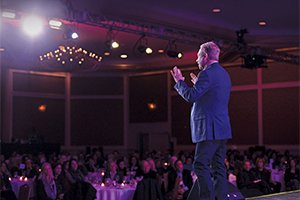 Stories Told at the End of the Day

Storytelling is nearly as old as language itself, a way of communing with others through showing and telling what’s meaningful—even necessary—in our lives. Many linguists believe that sharing in-person tales is encoded in our very DNA, with tone of voice, facial expressions, and gestures combining to more fully engage others and develop intimate connections with them.

Yet here we are. After thousands of years of oral storytelling, a large chunk of human communication now takes place at a safe and silent remove, as we punch our thumbs into glass to access the vast social media gang. We make arrangements to see each other, espouse political viewpoints to strangers around the world, and exchange photos featuring our adorable children and envy-worthy vacations. But when it comes to the struggle side of life—the side that most deeply connects people to one another—we often background it, or omit it altogether. Even as we gain an ever-larger audience for our communications, we may be losing a measure of raw, genuine communion. That kind of communion is the province of oral storytelling.

In our own small way, the Networker has tried to revive this ancient, tribal practice. At this year’s Symposium, we hosted our third annual evening of storytelling, wherein five veteran therapists got up on stage and told first-person stories about the client, or family member, who taught them something vital about themselves. What follows are these stories, brimming with early cluelessness, flashes of dark humor, outright failure, sudden insight, and ongoing surprises. To fully appreciate them as you read them, imagine each of these stories told and enacted, with a live audience and the full engagement of both body and mind. (You can actually see them performed here.)

As a member of the audience for the storytelling event, I first noticed a shift in the quality of intimacy that set it apart from the usual bustle and din of a conference of 4,000 therapists. On a Saturday evening in a hotel ballroom, following a chatty dinner, the lights were turned down two notches. People quieted themselves. As each storyteller came onstage and presented a true tale, the contrast between the clinical workshops earlier in the day and the performances unfolding before us was vivid. In the workshops, every speaker was an acknowledged expert. Here, no one was. No matter what their level of therapeutic skill—and in every case, it was considerable—here, the storytellers were just people like you and me, feeling their way through their work and their lives. None of the performers tied up their tale in a sparkly bow. They simply showed us “This is who I am.”

And the showing—the pulsing physicality of the presentations—was at the heart of the experience. It began with voice. The performers started calmly and conversationally, but as their stories evolved, we began to hear a larger range of vocal modes—near-whispers, shouts, mutters, the musical timbre of joy, and in one case, a strangled squeak. None of the storytellers told their tales from a podium; instead, they ranged across the stage and fully embodied their tales. One storyteller took on four characters almost simultaneously as he mimed a whole family entering a therapy office: the parents slumping their shoulders in defeat while their teenaged son sauntered in, bristling with cool disdain, and the therapist—then young and untested—practically flailing in panic.

Another performer sang and danced a slice of Motown, while still another channeled a client moving from frozen-bodied fear into wild, arm-wheeling triumph. We in the audience were riveted, now laughing our heads off, now holding our collective breath. The stories were live organisms. We were with them. We were there.

Perhaps the most unexpected element of the experience was its quietly interactive nature. As the performer enacted his or her story, the audience came to life, leaning forward at times, guffawing at others, sometimes visibly saddened, and occasionally looking a bit lost. And as the audience was watching the performer, you could see the performer watching the audience, reading its energy and then sometimes shifting direction or tone. This sort of improvisation is a vital element of oral storytelling, creating a charged, intimate space in which teller and listener matter to each other. And as the story evolves into a kind of cocreation, people on both sides of the stage begin to change. In in that darkened room, in that moment, we become a community.

Marian Sandmaier is features editor of the Networker. Watch videos of the storytelling performances here.