Who's Steering the Boat? 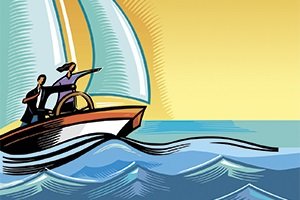 Who's Steering the Boat?


Jess Throndson, an addiction specialist at an Iowa mental health agency, wasn’t feeling optimistic. A past client, John, was back in her office seeking therapy—for the fourth time. Some months back, his wife had begun calling Throndson, telling her John was hitting the bottle again, hard, and wouldn’t stop yelling at her and their five kids. Her husband’s longstanding emotional demons, she confided, had bubbled back up.

Working with John had always been deflating for Throndson. A former Army sergeant, John had a PTSD diagnosis, along with signs of depression and long-term addiction. But he’d been relentlessly buttoned up in therapy. “Everything’s fine,” he’d repeated like a mantra whenever they’d met. “I’ve got it all under control.”

This time, John would be coming into her office sober. He’d just completed a month in residential treatment for alcoholism. But now that he was out, Throndson wasn’t sure the sobriety would stick. She’d learned that he’d gone kicking and screaming into the program after his probation officer had drawn a line in the sand: get therapy, plead your case before a judge, or serve your original three-year prison sentence for bringing a loaded weapon to a county fair.

Throndson wasn’t without hope for him. But she’d been working with addicts long enough to know that those mandated to meet with her were tougher to help than those who came in under their own steam. Plus, John’s PTSD and depression were longstanding. Now in his late…