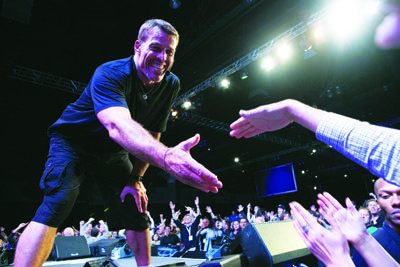 
Tony Robbins is up on stage, all 6 foot 7 inches of him. He claps his hands, jabs the air, jogs back and forth, and pumps his fist skyward like a giant boxing with God. “Come on!” he exhorts his audience of 2,500, who've gathered in the ballroom of the Boca Raton Hilton for A Date with Destiny, which is Robbins's signature, six-day personal growth extravaganza. “Come on!” He pauses for a second, gazes out at his audience, and breaks into a titanic grin, looking suddenly like a college kid who's showed up at a really, really amazing party. When he spreads his arms out to welcome the crowd, you're looking at a 7-foot wingspan.

“How're you doing out there, ladies and gentlemen?”

They roar. They stand, clap, jump in the air, shout whoo whoo, and otherwise go crazy on him. He's their rock star.

Tony Robbins, who will give a special session at the 41st annual Networker Symposium next March, is a pop psychology phenom. Over the last four decades, his work in the area of emotional growth and healing has influenced millions of people, most of whom will probably never see the inside of a therapist's office. According to his website, he's reached some 50 million individuals through his recordings, TV appearances, online offerings, and books, at least two of which have made the New York Times bestseller list. Four million people have attended his live seminars. His 2006 TED talk, entitled “Why We Do What We Do,” is the seventh-most watched…


Previous: Of Us and Them
Next: A Q & A with Tony Robbins
Read 10384 times
Comments - (existing users please login first)

I attended the Tony Robbins 'event' at the Psychotherapy Networker Symposium this past weekend. This article captures the mystery that is Tony Robbins. He is not afraid to be REAL, putting himself on the line in the most profound way. At one point he was suddenly standing behind me - I was near the back of the auditorium - and his presence felt honest, humble, and his strength both physical and spiritual. He can be counted on. I sensed that immediately. It was quite upsetting to move into the next day's workshop and have the presenter of that workshop disparage Tony as the antithesis of what "we" as psychotherapists are about (though I was not surprised). I applaud Psychotherapy Networker (Rich Simmons) for taking the risk of inviting Tony to this year's symposium. It was a real "oil and water" mix and sure to stir controversy. But that's exactly what this psychotherapy community needs - a stirring of our profession from the slumber of ego!

Wonderfully captured Marian. You made us feel like we were there--feeling it all along with the audience. Thank you. Viola

Fascinating article. Marian Sandmaier is a brilliant writer. I felt like I was in the room.