Is There Hope for a Divided America? 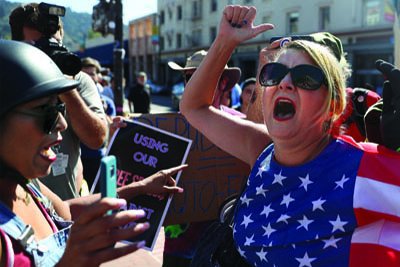 Is There Hope for a Divided America?


Before November 2016, I was a standard liberal in politics: an Obama-loving, Planned Parenthood–supporting, immigrant-friendly, big-business-wary Democrat. Hillary Clinton was to be the apotheosis of a tide of history toward women's rights—and minority rights would hopefully follow in her wake. Republicans and conservatives, I thought, would either become moderate or the victims of inexorable demographic shifts in the political Blue direction. Donald Trump would turn out to be a scary and comical footnote in political history.

But as Yoda would put it, "Wrong was I, and on every count." Not that I didn't do my small best to ward off such an outcome. During the campaign, I wrote a Citizen Therapist Manifesto against Trumpism, which garnered some 3,800 signatories and a fair amount of national media attention. The manifesto declined to diagnose Trump but called him a threat to American democracy and to the principles of healthy human relationships that psychotherapy stands for. Unfortunately, I was shouting in an echo chamber, unable to persuade even the handful of conservative therapists I knew of the disaster I felt their vote would bring. In their view, four to eight more years of Democrats would be the sure-fire disaster.

Although depressed after the election, I was troubled by the "Not My President" signs that seemed to echo the initial response to Obama's election ("Not an American"). I was also troubled by the emotional polarization I was seeing in…