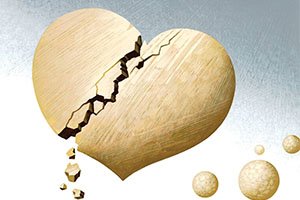 Broken Heart Syndrome: Can It Run in the Family?

“I know it’s late,” she says on a tiny screen, and before she can say another word, her face collapses and she’s crying into her hands.

My wife and I are on adrenaline-driven alert now, awake enough to say the things that parents everywhere instinctively say in the same tone of voice: “What’s wrong? Oh, Honey. It’s gonna be okay.” We’re propped up against the headboard, huddled close, each of us wishing we could climb through the screen to be with her. She’s utterly distraught, by turns weeping, furious, confused, desperate, blaming herself. Tears run like tiny creeks from her swollen eyes to the corners of her mouth as she sits cross-legged on a narrow bed. “Why is he doing this?” she asks over and over again.

My daughter has a broken heart. She’s 6,000 miles away, across an ocean, on a semester abroad, and she’s stricken. The little pissant she'd been seeing has broken her heart after they'd spent a romantic weekend together in Paris. On returning to their respective cities (he’s also studying abroad), he told her, using a twisted kind of alternative logic, that he missed her so much he needed to break up with her. It immediately transforms him from the good guy we’d met on several occasions to someone eminently hateable, and if he were here right now, I’d . . .

But never mind what I’d do. The real problem is that there’s nothing I can do or say to spare Erin the immense…