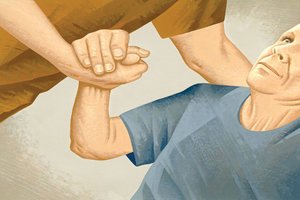 
A lot of blended families don’t really blend: the new “relatives” at first try to join together, but then they quietly distance themselves, however awkwardly, as differences and conflicts emerge, even as they try to pretend otherwise. My stepfather, Steve, and I made no such pretense—we were enemies from the start.

He entered my life when I was a cocky 16-year-old, about a year-and-a-half after the death of my own father from brain cancer. Steve was 45 at the time, and had already suffered a lifetime of tragedies, including the death of his mother when he was 6, 18 months of hard combat behind enemy lines in the Korean War, and the jolt of discovering his first wife in bed with another man. He was fixed up with my mother by mutual friends, latched onto her quickly, and held on tight, with no interest in dealing with her impudent children, especially the oldest son (me), who resembled the beloved husband for whom she still grieved.

I resented him from the moment I saw him. He was short and stocky; my dad had been tall. He was loud, opinionated, and boorish; my dad had taught me that only posers prattle on. He drank too much; my dad barely imbibed. For my mother’s sake, I spoke cordially to him, when I had to. But as we sidled past each other in the narrow hallways of the house, barely grunting acknowledgment, I saw an unwanted intruder with a hard, insolent stare. He saw a sneering, long-haired punk.

We might yet have found ways to bond. I loved riffing…

This is so true. Family is the first thing you should care of!

Dr. Jacobs, thank you for sharing this moving exposition of your journey of understanding. You've described beautifully the dance between yourself and your stepfather during his life --and the dance you have continued after his death.

I can’t tell you how moved i am by this piece in Psychotherapy Networker: “Intimate Enemies” is emotionally honest and raw, a thoroughly insightful and courageous essay. Thank you for sharing it with the readers of Psych Networker. Well done.