Is VR a Game Changer? 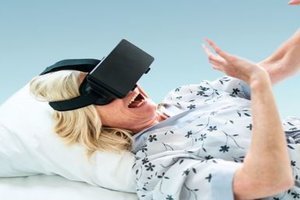 Is VR a Game Changer?

Whoa, what’s going on here? Where am I? What is this?” Joe exclaimed. “Where are my hands and my feet? Wow, this is fantastic!” Friends since our teenage years, I knew Joe had a tendency to be enthusiastic, but this reaction was really something. I’d given him options: Caribbean sunsets, the Alaskan shore, even a tour of Paris, but he chose to explore the stark and awe-inspiring American Southwest. For the next few moments, he stood in my living room, looking, laughing, and vocalizing sounds of amazement as he took in the different scenes. Of the 50 or so friends, coworkers, and clients whom I’ve watched try on my virtual reality (VR) gear and step into one of the 360-degree photos, Joe was the most effusive. Still, the others would agree that their introduction to VR was quite a memorable experience.

Of course, VR has been around since the 1980s, when Jaron Lanier, one of its initial theoreticians and developers, coined the term. VR sets have been used in therapeutic research for treatment of phobias since the mid-1990s, but they’ve only now started to enter the consumer market. Why? Well, it’s largely due to cell phones becoming so ubiquitous and inexpensive. With their high-resolution screens, small built-in cameras, and motion detectors, the production of billions of cellphone devices dramatically reduced the cost of the key components required for VR equipment. In fact, Lanier estimates that back in 1990, it would’ve cost a million dollars to buy a VR set that…