Life, Death, and a Good Cigar 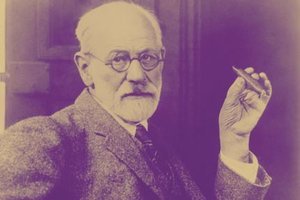 Life, Death, and a Good Cigar

Freud Chose to Face the End on His Own Terms


For most of us, death seems both terrifying and unfathomable, clearly very real—nothing more real—but also impossible, inconceivable. In The Violet Hour, author Katie Roiphe, a journalist nicknamed the “uncomfortabilist” because of her unsparing eye for the foibles and hypocrisies of our time, offers a set of unusual essays, both biographical and meditative, about the last days of six famous authors (Sigmund Freud, Susan Sontag, John Updike, Dylan Thomas, Maurice Sendak, and James Salter), seemingly as if perched on their shoulders throughout their final struggle to face their death.

In the excerpt below, Roiphe gives us her portrait of Sigmund Freud—the image of a profoundly self-willed man, who began preparing for death many decades before the actual event, apparently obsessed by it, even as he was determined not to be cowed by it. To be stalwart, uncomplaining before death, unseduced by the sweet-talking blandishments of religion was a moral imperative—anything less, more merely “human,” would be shameful, a blot on psychoanalysis, which was, above all, the application of hard-headed reason to the murky forces of unreason.

And yet, in spite of endless warnings from his doctor, this obdurately rational man wouldn’t give up his beloved cigars, even to save his own life. Indeed, smoking seems itself to have been perhaps his most comforting and most loyal companion, in his mind linked to his creativity, even to a sense of inner wildness that…

A very touching essay, this moved me to tears. Thank you for bringing out Freud's humanity and courage.