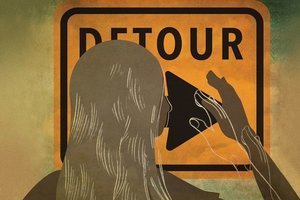 If you have a broken arm, a doctor needs only to stitch up any wounds, set the bones, and apply a cast so the bones can heal. A more complete assessment of your health isn’t necessary unless you’re displaying signs of other problems. In the same way, when a client comes in to my office seeking a specific, well-formed therapeutic outcome, I believe there’s no need for a detailed assessment of their entire life history and family relationships. This is particularly true when the outcome is to change an automatic habit, which was the request I received recently from a father wanting to bring in his 13-year-old daughter, Donna, because she had a habit that was upsetting her.

“And what is this habit?” I asked.

“She picks her nose and eats the snot,” he answered bluntly.

“How long has she been doing this?” I asked, “And what’s been happening recently that’s caused you to seek professional help for it?”

“She’s had this habit since she was a small child, but now she’s in junior high, and other students are making fun of her for it. She’s tried to stop, but as soon as her attention wanders, a finger is picking again. She keeps coming to me in tears, and I want you to help her.”

The following week, when I met them in my waiting room, I found a slender, distinguished-looking man in a well-tailored suit, sitting with his left arm protectively around the shoulder of his daughter, who had beautiful features, long hair, and looked at least 16.

Alert to any indications of ambivalence or troubled family relationships around the presenting problem, I watched Donna carefully as she and her father moved to the couch in my office, where again they settled in next to each other. I started by talking to Donna.

“I understand that you would like to stop picking your nose, is that right?” I asked, to which she nodded vigorously. I saw no hesitations, aversive movements, or facial expressions that indicated her father had dragged her in against her will. I could’ve asked her directly if she had any objections to changing her habit, but that might elicit an uncertainty that wasn’t there to begin with, which wouldn’t support making the change she wanted.

I used to think I needed to spend more time building a relationship, and with clients who are ambivalent, confused, or frankly delusional, that’s likely to be true; however, when a client is congruently responsive and motivated, I find that I can quickly develop strong rapport by fully acknowledging what they want, and demonstrating that I have a clear plan for helping them achieve it.

“Donna, I wonder what positive habits you have, things you can do easily without thinking,” I mused aloud.

“I ride my bike and brush my teeth without even thinking. Sometimes I can’t recall later whether I did it or not.”

Then I explained that the brain is like a computer in some ways; sometimes a virus gets in accidentally, and we need to update the software. “Annoying habits are like a virus in a computer,” I said. “And I’m wondering if it would it be all right if we updated your software today?”

Donna nodded her head vigorously with a shy smile.

I used the upgrade-the-software metaphor for a reason: no one can blame a computer for doing what it does. But if this metaphor had elicited a puzzled look from Donna, I’d have changed it to something she could more easily grasp. The important thing was to make sure that she knew that I wasn’t was judging her for picking her nose.

Continuing my focus on positive habits, I said, “The brain doesn’t like to stop habits, but it’s really good at switching to another habit. Take sports as an example: a coach helps us practice new habits. I wonder what sports you enjoy.”

“I take karate lessons so I can learn how to protect myself,” Donna replied, as her father nodded in agreement.

“So you’re learning new habits. Wonderful,” I responded. “And it’s fun to learn new karate skills, is it not?”

She nodded her head again, a little more vigorously.

At this point, I’d assembled a number of important frames of understanding to support what I intended to do. It was a little like assembling all the ingredients for a meal before starting to cook. This platform of understanding created a template for my next instructions, and avoided any misunderstandings that could become obstacles. All this was done conversationally; very few observers of the session would’ve recognized these instructions as hypnotic suggestions that elicited specific responses.

Then I moved gently into more obvious hypnosis, lowering the tone and tempo of my voice, and using hand levitation to elicit full unconscious participation. “So, Donna, close your eyes now, and rest your hands on your knees,” I started. “Now ask your brain if it’d be all right for your hands to start learning a new habit. As your left hand slowly begins to lift and float upward toward your face, it will detour to brush back your hair, as girls often do.”

I touched her left hand briefly to indicate unambiguously which hand I meant, since many children have difficulty with left and right, and I chose her left hand because it is usually the one we’re less conscious of, so it will respond more fully to suggestion. “And if your brain would like to make that little detour, your left hand will begin to float, your brain’s way of saying ‘Yes,’ your hand floating as though helium-filled balloons were tied to the fingers and wrist. Give your brain a little time to think about that, and then it can say ‘Yes’ by letting your hand float upward toward your face and then detouring to brush back your hair.”

As her left hand began to lift, I said, “That’s right, your brain is saying ‘Yes’ to your new habit, all the way to your hair,” which she began brushing back slowly, over and over. All these instructions were directed toward Donna’s brain and hand; she was only a passive observer. After a while I suggested that she give her right hand a chance to practice the new habit, and her right hand soon floated up, too. Her eyes remained closed as both hands in a relaxed flowing motion alternately brushed back her beautiful blonde hair.

While she practiced, I softened and slowed my voice further to make it even more hypnotic, to support her unconscious learning. “And I wonder what you will most enjoy about your new habit, and how soon you will begin to forget that you ever had the old habit?” This suggested that she step into the future when the change had already happened, focusing her attention on enjoying and forgetting, both of which presuppose the existence of the new habit.

Donna kept brushing her hair, her ears and mind working, taking in further examples of easily changing an ingrown habit.

“Donna, you’ve done a really good job of practicing your new habit, so it’s all right to let your hands come to rest in your lap now, and open your eyes and feel pleased with yourself and thankful for your smart brain,” I told her. “You did so well. And your new habit will become more and more automatic, just like riding your bike or brushing your teeth. For a while, as your brain is getting used to the new habit, one of your hands might accidentally touch your nose on the way to your hair. That’s all right. It’s like learning a new move in karate—it becomes more and more automatic, right?” And she nodded her head. “And at other times your nose might itch, so you’ll want to scratch it, or brush something off it,” and she nodded again. This further reinforced her new learning, and at the same time framed any touching of her nose as accidental, or for some other purpose.

I asked the father to stay in touch, and they left the office with smiles and hugs. I often use a follow-up phone call, both because it is a reminder and reinforcement of the client’s experience in the session, and because of all the implications of thinking about them “off the clock.”

The father appreciated my call and said that Donna appeared to be doing fine. I checked with both the father and the mother several times over the next three months. They continued to report that Donna was doing fine with her new habit.

This blog is excerpted from "Upgrading the Software" by Ronald Soderquist. The full version is available in the July/August 2016 issue, OCD: Is There Any Way to Turn It Off?