The Siren's Song of Neuroscience 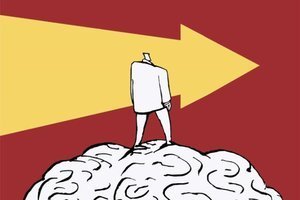 The Decade of the Brain ended years ago, but certainly not the explosive growth of neuroscience research, nor the popular interest in the three pounds of tofu-textured tissue between our ears. I fully understand this infatuation with neuroscience, having fallen hard for the little charmer myself. How could I not, given the sheer wonder of the extraordinary complexity of the brain? Just consider the numbers: the brain has 100 billion neurons amid another trillion support cells. A typical neuron connects with 5,000 other neurons, adding up to about 500 trillion synapses. The number of possible combinations of those 100 billion neurons is more than 10 to the millionth power—that’s a one followed by a million zeros. As a comparison, the number of particles in the universe is estimated to be a one followed by a paltry 80 zeros.

It’s perfectly natural to be enthralled by this wonderful—and scientific!—new framework that’s starting to offer neurological evidence for the effectiveness of different therapeutic methods. Compared with the murky ambiguities of psychotherapy, the sheer visibility of the scanned brain—the ability to watch its neural structures and processes in action—is thrilling indeed. But if we get too infatuated with brain science, we’ll forget how young this field really is and how little we truly know. Neuroscience is a baby science, after all. I think it’s roughly comparable to where biology was a couple hundred years after the invention of the microscope: that is, around 1825.

There’s a natural rhythm of rise and fall in any profession when a new and exciting perspective comes along. In our own field, we’ve seen this happen with psychoanalysis, behaviorism, humanistic psychology, family systems theory, and positive psychology—and now it’s happening again with neuroscience. I think we’re at that point now in the history of the “brain rush” when we’re recognizing just how limited our knowledge is and how hard it is to make a meaningful correlation between our general ideas about the brain and the specific, real-life needs of our clients in day-to-day therapy. We’re also up against the temptation to go overboard with superficial and half-digested knowledge about what’s arguably the most complex and still barely explored object known to science.

The Siren Song of Oversimplification

Just about any significant mental function relies on the dynamic interworking of multiple neural assemblies and processes involving many different brain areas. Nonetheless, it’s easy to be seduced by the magic of brain terminology to play 21st-century phrenologist. Consider these common assertions about which pocket or bump in the brain controls which human function: emotion comes from the limbic system; the insula is the seat of self-awareness; fear is in the amygdala; the right hemisphere holds the sense of a personal self existing across time; empathy is about mirror neurons; and so on.

Even worse, neural reductionism puts our clients—and society as a whole—on a slippery slope of declining moral responsibility. What’s the logical extension of reducing depression to low serotonin, addiction to insufficient dopamine receptors, and angry outbursts to the lizard brain within us all? Men who say that emotional conversation is beyond them due to their male brains? Teenagers who say they can’t do their homework because their brains don’t produce enough acetylcholine?

How the Brain Learns

People come to a therapist because they want something to change: they want to feel or act differently, understand themselves or others better, or relate to things that won’t change in a more spacious and accepting way. These changes of mind, of course, require changes of brain. Psychotherapists are in the business of changing the brain for the better, which means building up the neural substrates of inner strengths, including character virtues, executive functions, perspectives, attitudes, positive emotions, and capabilities. These positive traits are the resources we draw upon to soothe ourselves, lower anxiety, feel loved and worthy, be appropriately assertive, contribute to others, and choose the higher road over the lower one. In many ways, the essence of therapy is developing inner strengths.

How often does this sustained immersion in the positive experience actually happen in therapy, or outside it? In general, not often enough. There could be a stream of positive experiences, interspersed with neutral ones, running through someone’s awareness, but each incoming experience—the next mental state—dislodges the current one in short-term buffers before it has much chance to sift down into long-term storage.

The first step—Have—initiates the activation phase of learning by either noticing or creating a positive mental state. For example, in a session, I could help a client become more mindful of the sense, already hovering in the background of awareness, of feeling cared about by his or her friends. Then between sessions, the client could try to notice this feeling more when it’s present in daily life. The client could also deliberately create the feeling of being cared about by bringing to mind times when he or she felt included, appreciated, liked, or loved.

The second step—Enrich—begins the installation phase by drawing on one or more of five well-known factors in the neuropsychology of learning:

With a client who’s sharing an experience of feeling cared about, I could gently slow him down as he talks about it and bring him back if he gets distracted, thus helping the experience last (duration). I might ask if he can let the feelings of being seen and appreciated become more powerful (intensity) and more felt in his body, perhaps by placing a hand on his heart (multimodality). In mirroring back what the client’s saying, I might emphasize an aspect of feeling cared about that he’s never spoken of before to highlight fresh nuances in familiar experiences (novelty). And I could ask how this experience has mattered to him (personal relevance).

The third step—Absorb—heightens installation by priming and sensitizing memory systems. For example, when we’re determined to take in the sight of a gorgeous sunset, we intend to let this experience really sink in. In the same way, I might ask my client if he can give himself over to feeling cared about and let this experience become a part of himself, perhaps by imagining that it’s soaking into him like a warm soothing balm. With children, I’ve described the process as putting a jewel in the treasure chest of the heart that they can now take with them wherever they go.

Clients can apply these skills to positive experiences in everyday life, using a dozen seconds or more to take in a feeling of relaxation, a sense of accomplishment in finishing a task, or the warmth in a friend’s smile. They can also apply them to “key resource experiences” in a framework I use based on how the nervous system evolved. As the brain developed in its reptile, mammal, and primate/human stages, so did its capacities to meet the three fundamental needs of any animal: safety, satisfaction, and connection.

The Law of Little Things

The brain is the organ that learns, continually changing its structure for better or worse—with a bias toward changing for the worse. By tilting toward the positive—by activating and installing positive experiences—we simply compensate for this bias and level the playing field. Powerful forces are trying to change our brains each day from the outside in: authority figures, economic pressures, “if it bleeds it leads” media, political groups, advertising, and so forth. In the face of these pressures, we can teach our clients ways to change their brains from the inside out.

Deciding to reshape one’s brain by intentionally taking in the good, one thought or experience at a time, begins with a conscious, willed decision of the mind. Regardless of what’s discovered about the brain, each person still has to decide how to live his or her life. The brain has a tremendous range of capacities that can be used for good or ill, and it has inclinations in both directions. Therefore, the crux of human behavior and experience is less the nature of the brain than the values of the mind.

Twenty-five hundred years ago, long before the invention of EEGs and MRIs, the Buddha offered a teaching suggesting that he, too, along with Proust, was a kind of neuroscientist, who understood both the power of little things and our profound human capacities to heal and to grow: “Think not lightly of good, saying, ‘It will not come to me.’ Drop by drop is the water pot filled. Likewise, the wise one, gathering it little by little, fills oneself with good.”

This blog is excerpted from "The Next Big Step" by Rick Hanson. The full version is available in the January/February 2014 issue, Untangling Brain Science: Has It Lived Up to Its Promise for Therapists?

Read more FREE articles like this on Brain Science.