Issues of Race and Therapy

Ken Hardy on the Need to Expand Our Therapeutic Focus 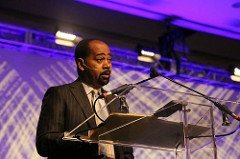 An assaulted sense of self is the result of people’s soul being perpetually punctured. It’s the culmination of a massive onslaught of assaults, both micro and macro, on one’s dignity. It comes from an overexposure to humiliation and dehumanization. And it leads to defining one’s sense of self by what I’m not, rather than what I am. So as a therapist who sits with black families, I’m struck by the fact that while the white parents I see typically talk in glowing terms about what their children are, black parents often feel compelled to talk about what our children are not. “My son is not a bad kid. He’s not in gangs. He doesn’t wear those baggy pants.”

Imagine that for some odd and inexplicable reason each of us here today came with a hammer and a nail, and we all felt compelled to hammer our nail into that wall. Then when it was pointed out to us how much damage was done to the wall, we decided to remove the nails. Once we did that, and despite all that effort, what remains is still all the holes from the nails. That’s what having an assaulted sense of self is like for black people.

Since our therapeutic community is quite skilled at coming up with diagnostic labels, I’ve made a point of asking what name we give to the pain that so many black mothers feel about what seems like the impending loss of their children. What do we do to help these mothers give voice to that fear and pain that mostly remains nameless?

I doubt that many of the people here who identify as white could even begin to fathom how much they’re in the minds of black people every day of our lives, as we make decisions about what to say and what not to say, what to wear and what not to wear, so you won’t think a certain way about us. It’s hard to talk about this issue because it often gets silenced in subtle ways by questions like, “Why are you so angry? Why are you not a team player?” But my concern as a therapist is how we can learn more fully to recognize that we’re entangled in a massive web of mutuality. Whether we like it or not, we’re inextricably tied together, and the fate of my life affects the fate of your life—and yours, of mine.

As therapists, I’m hoping that you recognize that there’s a critical distinction to be made between our work and our job. It may well be that in your job, you don’t interface with people of color. But I hope it wouldn’t be true of your work, because our work is what we do on behalf of humanity. Our work is what we do to make sure that we leave this planet a little bit better, a little more advanced. So even if it isn’t your job, I hope you’d make talking about race your work.

White people often say to me, “Why do you always have to speak about race? Why do you always have to bring up race? Why?” I’ve never had a good response, but now I do. I bring it up because you don’t, and I solemnly swear to you that I’ll bring it up less, if you solemnly swear to bring it up more. We’re all healers after all, and healers are visionary. The healer is the person who looks at what is and says, “That’s not the way it has to be.” The healer recognizes that the impossible is indeed possible, and though it may take a while, the healer recognizes that there’s always a place and a space to allow untold stories to be heard. And above all, the healer recognizes that as therapists, we’re in the hope-manufacturing business, and it’s our duty, our task to maintain hope, even in places where hope has long since ceased to exist.

This blog is excerpted from "The View from Black America" by Kenneth Hardy. The full version is available in the May/June 2016 issue, Unexpected Gifts: Six Master Therapists Recall their Most Unforgettable Sessions.