On the Front Lines of Inner City Social Work 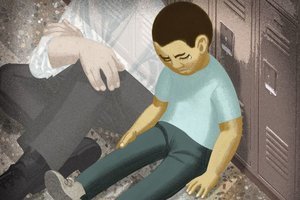 If you regularly attend psychotherapy conferences, you can easily get the idea that doing therapy must demand a high level of sophisticated know-how⁠—perhaps a firm grasp of the role of attachment theory in clinical work, or how to integrate mindfulness training into daily sessions, or which of the latest high-tech interventions best matches with a client’s specific presenting complaint. Though all these skills can undoubtedly help us become more creative and knowledgeable practitioners, I sometimes think we’re in danger of forgetting that some of the most important work we do isn’t based on any complicated methodology, but relies on the homelier values of compassion, patience, and common sense. The cornerstone of what we do is the ability to be present for people, making them feel seen, heard, and supported, whatever comes up.

In no area of therapy is this truer than school counseling, a field whose practitioners could be considered the equivalent to emergency first responders working on the front lines of a battlefield, dealing with sudden crises in the lives of little soldiers. As a school social worker in a South Bronx elementary school, the kids I see have a vast range of personal, social, economic, and medical issues, which can have disastrous consequences for their chances for success and well-being, even before they arrive at adolescence. Issues that come up routinely often include academic difficulties, PTSD, family violence, cognitive problems, an incarcerated dad, neglectful or abusive parents, social isolation, poverty, and the absence of community resources. Add homelessness, overcrowded housing, parental substance abuse, and violence in the neighborhood, and it’s no wonder that many families simply don’t have the emotional, much less the economic, wherewithal to nourish a child.

With so much stacked against these children, what can a school counselor do? How can we make a difference with children whose life circumstances seem so dismal? A few stunning miracle cures may be floating around out there, but the rewards of time, dogged persistence, and ordinary kindness in a supportive school environment can work their own kind of wonders. With these children, counselors shouldn’t expect to see changes in one or two sessions: this work can take years. It requires looking for small triumphs⁠—little victories, which, in addition to improvement in school academically and socially, can include smiles where there were none, more resonance and volume in a voice that only spoke in whispers, a child looking forward to seeing the counselor and asking for specific activities, sharing small and large confidences, and making more eye contact. Working early enough with these children can help counteract an incapacitating present and provide vital coping skills for the future.

Getting Alex through the Door

I met Alex four years ago, when he was in first grade⁠—a plump, Latino boy with large brown eyes and curly dark hair shaved on the sides. One morning during the first week of school, the assistant principal asked me to talk to Alex outside the school building because he flat-out refused to come inside. He was standing by the entrance with his arms crossed. His stone-cold face said, “I’m not going in there with you,” and for a long time, he didn’t. Students walked by in bunches, the latecomers straggled in, and then a tiny trickle, child by child, as Alex stood his ground. My attempts to break the ice by asking him about things he liked⁠—TV shows, video games⁠—were met with silence. Finally, I said, “Well, I’ll bet something happened that upset you this morning. Do you want to talk about it?” His eyes welled up and he began to cry. This is usually a prelude in young kids to opening up and talking, but not with Alex.

Usually an older sibling will have insight into family problems and can talk for the younger one. So I was glad that when I asked if he had an older brother or sister in school, he nodded and softly told me that his sister, Ali, was in the fourth grade. Soon Ali came downstairs and the three of us walked up to my office, where she explained that their mother had yelled at him that morning for taking too long to get ready for school. We then drew pictures of the family. Ali drew mom, Alex, and herself, while Alex drew himself, mom, Ali, and his dad. Family drawings are a great way to get kids to talk about who is and isn’t in their family. Whom they include or leave out is significant. After a while in my office, Alex told me that his mom and dad had just divorced and how sad that was making him. He missed his dad and described crying in bed nightly before falling asleep.

Slowly Alex warmed up to me, and his morning behavior began to reverse. He started standing outside the door instead of lying down, and he’d come with me regularly to my office. He wasn’t talkative, but we moved toward doing as the basis of our work, rather than speaking. We both seemed to evolve in each other’s presence, me making efforts to bring in creative interventions like art and story-making, and him making efforts to speak. In fact, making things allowed him to be less conscious of the focus on him, easing the path to verbal communication and, as an added benefit, raising his self-esteem.

Alex’s dad continued to come in so we could discuss Alex, their weekends together, and the things he admired about his son. It was a nice way for him and Alex to have some time together. In his dad’s presence, Alex’s entire demeanor would change dramatically. He sat straighter and smiled, and his eyes brightened as he paid close attention to what his dad said. Unfortunately, despite my doing anger coaching with his mother, she continued to yell at Alex for his sadness. Alex often commented that he wanted to live with his father, but he worked such late hours in the catering business that such an arrangement wasn’t feasible. As it was, Alex’s paternal grandmother had to watch him and his sister on weekends.

Because Alex was doing so poorly in first grade, he was placed in a special education classroom for second grade. He was referred for an evaluation and diagnosed by the school-based support team as having a learning disability caused by his lack of ability and motivation to work, a result of his depression. While he remained depressed in his second year, he became more verbal in the individual sessions and gradually made a few friends. He began to be more accepting of his home life and showed so much academic improvement toward the end of the year that his teacher suggested he be mainstreamed into regular math and reading classes.

Seven months into second grade, with success in the mainstreamed classes, his teacher wanted to place him full-time into a new class, comprising regular-education children and special-education children in equal numbers, with two teachers. Once again, Alex resisted the new move, but this time he went along anyway; there was no collapsing in a heap outside the door. To everyone’s great joy, he flourished there.

Shaping Their Own Worlds

Part of the work with children like Alex is giving them undivided attention, conveying the unequivocal message “I care about you,” which counts for a lot with a child who gets little loving attention at home and must vie for it from a teacher with 29 other students. But just as important is how that attention is structured. Using therapeutic tools like pencils, rulers, hammers, soldering irons, and glue-guns to engage them in making things like homemade models, cardboard sculptures, and vehicles temporarily frees them from a crippling focus on themselves and their own depression or anxiety.

Crafting things with their hands not only makes talking easier for kids, but gives them a can-do attitude, boosts their self-esteem, and increases their feeling of personal agency. Often they begin developing the sense that they can shape their own worlds. A finished project to take home can be a beautiful thing to a child. This work, by and large, doesn’t provide major or permanent fixes to the unfixable circumstances of their lives, but it does help them find ways to transcend their sadness and build up stores of inner resilience.

Children like Alex have had little choice in what happens to them, so when I work with them, I want them to feel, as much as possible, that they are making the choices. I allowed Alex to choose the supplies we used, the colors, and the kinds of projects we did together, be they making cars, rockets, or homemade board games. During these sessions, his voice rang with excitement and purpose, and he took obvious pride and pleasure in the objects he made.

Today, in our fourth year together, Alex still admits to feeling sad about seeing his father only on random weekends, but he smiles often and laughs. Even though I wasn’t successful in helping Alex get what he really wanted⁠—more contact with his father⁠—and could only facilitate a partially improved relationship with his mother, simply showing Alex that he has someone walking alongside him has made a big difference in his life.

Helping children who live in what many consider near-hopeless conditions of homelessness, neglect, chaotic households, and little intellectual or emotional stimulation can be quite a challenge. Yet the techniques I use⁠—comforting them, encouraging them, letting them know I deeply care, giving them my undivided attention, teaching them a few simple craft projects, making jokes with them, focusing on small victories⁠—can make the difference between hope and despair. My interventions may not seem complicated, but they help children replace feelings of worthlessness with a sense of their own possibilities.

As a young social worker, I used to feel frustrated and impatient with the slow pace of behavioral and emotional change in children like Alex. I thought I’d be the superhero of their lives and in a few months they’d blossom magically into problem-free, capable young people. Now I know better. However long it takes, however painstaking, this work is well worth the effort and the wait. Patience, compassion, and being there can help our youngest clients draw vitality out of living, and even the unhappiest can begin to believe that their lives are worth living after all.

Howard Honigsfeld, MSW, is a clinical social worker. He specializes in working with children and their families.

This blog is excerpted from "Supporting the Overwhelmed Child" by Howard Honigsfeld. The full version is available in the March/April 2016 issue, The Mystery of Gender: Are Therapists in the Dark?