Parents and Their Transgender Children Find a Healing, Validating Community 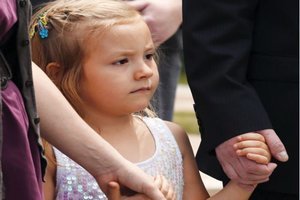 None of us is really prepared for our children. When they’re born, we have no way of knowing what we’re getting—what kind of temperament, passions, behavioral quirks, lovable qualities, and special talents for driving us crazy. Many parents find it especially difficult to adapt to the ways in which their child is different from them. But if your child is someone who not just differs from you, but shatters one of the fundamental tenets of our culture—that a child is born either a boy or a girl and will stay that way—parenting can be shot through with a particular depth of bewilderment, loss, fear, and loneliness.

In the stories that follow, a parent and one trans teen talk about these struggles and how they’re moving through them. All participate in the Ackerman Institute’s groundbreaking Gender & Family Project, which offers a range of gender-affirmative services to parents and children, from therapy and coaching to an array of ongoing support groups. The individuals who speak here by no means represent all families grappling with gender fluidity, but all have grappled with massive shock, confusion, fear for their child, and profound isolation. But since then, they’ve begun to develop new strengths and deepened connections, both with their child and a larger community that validates and supports them.

Assigned female at birth, Zee was a happy, strong-willed child. At around age 3, he began to express a strong preference for boyish types of clothes and toys. At first, it just seemed that he wanted to be like his boy cousins and, since most of the women in my family were considered “tomboys” anyway, no one paid much attention to these preferences. It wasn’t until he started public school in kindergarten, where the activities of boys and girls began to be so segregated, that he had to encounter the question of where he fit in. I’d pick him up in tears because the boys wouldn’t let him play with them since they considered him a girl, and the girls wouldn’t let him play them either because he liked boys’ toys and never had a doll with him.

At first, my husband and I thought Zee was just going through a stage of some kind. Some days he’d tell me, “I’m Max today” or “I’m Jordan.” Two or three days later he’d be Caroline, his legal female name. My husband thought that by accepting the various names he used, I was encouraging some confusion. But it wasn’t just different names. Some days his body language was very identifiable as a male; some days it was very female, like the way he walked and the tone of his voice. Neither of us could really understand what was happening. We’d never encountered the terms transgender or gender nonconforming.

We began to get more worried when Zee started getting intensely upset by people’s confusion about his gender. For example, the crossing guards on our way to school would often, in a friendly way, say things to him like, “Good morning, Princess. You look so beautiful today.” or “Such a pretty haircut. It really fits your face.” Over time, that became more disturbing for Zee. He’d have tantrums that might last for 30 minutes and cry, “I don’t want him to tell me I’m a princess! I’m not a princess!” Sometimes on the subway, he’d cover himself because he didn’t want people to look at or talk to him.

Fortunately, I found a group of young men in our Brooklyn neighborhood who were part of the Campaign for Human Rights to legalize gay marriage. They took my contact information and within half an hour I got a bunch of links to Gender Spectrum and other support groups. From there, I found out about the Ackerman Institute’s Gender & Family Project. I went up to their website and saw a videotape by therapist Jean Malpas about transgender kids. For the first time, it was as if somebody understood my child and what we were going through. One moment I felt we were the only family in the world going through this, and then suddenly I discovered there was a whole community out there to support us.

We began by going to the monthly support group for parents, and then a few months later Zee joined the kids’ support group for gender nonconforming and transgender kids. In the group, his voice grew louder and louder. Little by little he started understanding that you could choose the pronoun you wanted to use to refer to yourself and how you could define who you are. For a while, he was the “in between” kid. Sometimes he’d go by “he,” then he’d go by “she.” But by the end of second grade, he started to identify only as a male.

Right now Zee is in fourth grade. My hope is that he’ll grow up not being at war with the body he has. He’s approaching adolescence and we just went for a consultation about puberty blockers to give him more time and more maturity to make the decisions he’ll need to make about his physical development. We hope he’ll continue to grow up in a world with enough acceptance to support him in choosing to be who he is with the body that he has.

Whatever happens, Ackerman has become a lifeline for us, a place where we can share our journey with other families. It’s important for all of us to see older, gender-noncon­forming kids who are happy and secure in who they are. And Zee gets to meet other kids who are like him. He now knows that he’s not the only one. Realizing that gives him a strength and a voice he wouldn’t otherwise have.

I’ve always felt that I was a girl inside: like my body didn’t match with my brain. It’s never really been about figuring out my identity—I was never confused about that. When I was 2 or 3, I remember getting a box filled with princess dresses. When I put on those dresses, I felt alive and really happy in a new way. It might be hard for other people to understand, but I just thought, “Well, I’m a girl. I’m just in the wrong body.”

The first time I remember getting a negative reaction about feeling like a girl inside was when I was 4 and dressed up for Halloween as Rapunzel. The other kids said some mean things, and I remember crying and wondering why they were treating me so badly. As I got older, I remember feeling upset that I couldn’t be myself in public, that I couldn’t wear the same things as my other female friends, that I couldn’t go into the girls’ bathroom. From the beginning, I gravitated toward girly things, and all my friends were girls who were really supportive of me and just thought of me as one of them. So when I had to go in the boys’ bathroom, it just felt weird. It was almost like leading a double life: at home I wore dresses and could do whatever I wanted, but in public, it was different. I didn’t fully understand why at that point.

In particular, I remember Moving Up Day in fifth grade, a ceremony having to do with entering middle school. At the end of the ceremony, we had to do this dance involving a boys’ line and a girls’ line. When I tried to sneak into the girls’ line, my friends, who were usually very accepting, said, “Oh, come on, Ian.”—that was my boy’s name—“Get in the boys’ line.” That was really painful for me. I felt like there was always going to be a divide between me and my friends because they’d never really understand how much that kind of thing hurt me.

I can’t even remember when I first heard of the word transgender or how I found out about it. But my mom always wanted to let me know that I wasn’t alone in the world and that there were other kids like me. At first, I didn’t really understand that; there was no one really like me in my school. It wasn’t until I was 8 and the Ackerman Institute opened up its group for transgender kids that I started to see it was true: there were other kids out there like me. And that gave me a new experience and a different sense of being connected than I’d ever felt before.

I transitioned after the fifth grade. I left my old school on a good note, with all my friends knowing about me being transgender. And I entered a new school as a girl with a fresh start as Ariel. It wasn’t like I was trying to be stealth or anything; I just wanted my friends at my new school to see me as a person, not a transgender person. Then later on, it would be up to me to tell them myself.

I guess the most important thing I’ve learned about being transgender is that there are always places and resources you can find for help. It’s important to keep fighting for what you believe in, because that’s what this whole journey is about. You just need to find people who are going to love you and accept you and surround you with positivity.

Marian Sandmaier, is Features Editor of the Networker and a freelance editor specializing in books on psychotherapy. She’s been published in The New York Times and The Washington Post, and is the author of Original Kin: The Search for Connection among Adult Sisters and Brothers.

This blog is excerpted from "It Takes a Tribe" by Marian Sandmaier. The full version is available in the March/April 2016 issue, The Mystery of Gender: Are Therapists in the Dark?