For Many Men, Therapy is a Lion's Den of Shame and Humiliation 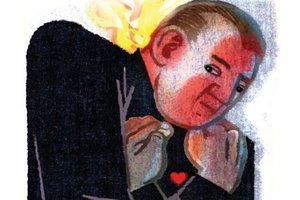 My best friend, Jake Kriger, and I have been running therapeutic men’s groups—we call them “friendship labs”—for the past 18 years. While everyone believes that emotional intimacy is important in relationships, men often struggle with certain skills—like emotional expressiveness, self-disclosure, vulnerability, giving and getting support, letting go of control, cooperation, and reciprocity—that are at odds with our cultural definitions of successful masculinity. Psychotherapy has developed clever methods to persuade men to adopt the more open and expressive habits, but many guys entering therapy still feel as though they’re walking into a lion’s den of shame, humiliation, and failure if they acquire them—specifically, failure as men.

We’ve found that groups are particularly appealing for men who experience traditional individual or couples approaches as being too alien or off-putting. There’s something comforting about being part of a group of guys dealing with similar issues, who are there to ask for and give support to each other.

Because our groups are therapeutically oriented, rather than simply supportive or educational, men can develop the emotional skills with each other similar to those learned in therapy. We emphasize that emotional intimacy skills aren’t just for women—they’re a central part of healthy masculinity, and as the men in our groups discover, they take work to develop.

Jack and Caroline had been in couples therapy for only a few months when their therapist, Rhonda, a colleague and friend of mine, noticed that his interest appeared to be flagging. He seemed sincere, but continued to zone out when Caroline asked him to attend to her emotional needs. He’d shake his head affirmatively, but nothing seemed to be getting through. When they tried to speak at home, Jack would drink, argue, and withdraw.

Jack was the oldest of three children. When he was 10, his father had left his mother for a younger woman. After this, Jack felt that he’d become the scapegoat for his parents’ divorce. His mother became increasingly critical and, according to Jack, “never failed to compare me negatively to my father.” For a while, he’d tried to be a model son, accommodating his mother in whatever way he could, but eventually he realized this wasn’t productive.

After a few months of getting nowhere with Jack, Rhonda, called me and said, “Do I have a guy for your men’s group!”

“Rhonda thought I might like your group and that it might help our couples therapy,” Jack said, when he came in for his screening evaluation. “I have an easier time with guys,” he admitted. “With Caroline, I just don’t know. I get so angry with her. It’s irrational. She just pisses me off when she presses me about money.”

Jack was embarrassed about his behaviors. “I don’t speak to anyone, my friends included, about these things.” Jake, my coleader, stepped in to reassure him, “The whole idea is that the group is a place where guys can feel safe to talk about things they normally don’t share, and get support from each other. You can share details at your own pace. We’re not going to force you to reveal anything.” Jack seemed relieved to hear this.

When Jack came to his first meeting, we encouraged the guys who were already members to give updates on their own situations first. We have six men in each group, and wanted Jack to get comfortable with the kind of sharing that occurs. He was riveted, listening to these men opening up about their personal issues. Men like the idea that they’re not alone when they struggle with emotional problems. When they find that there are other men who, like themselves, are generally regarded as successful and competent, but also struggle with difficult emotional issues, they feel relieved and uplifted.

When it was his turn, Jack jumped in, sharing his childhood history, what he thought were his “therapy issues,” and how he routinely got annoyed with Caroline. The group’s attention seemed to energize him, and when he’d finished his story, he presented his dilemma: “It seems like I’m not the only guy here who has trouble with his wife. What would you guys suggest I do with her? That’s what I’m trying to figure out.” There was silence in the room.

Finally, Ed, one of the group members, responded: “I guess if I were you, I’d start by trying to figure out why you’re so angry with your wife—a person who you seem to love—and try to get this under control.” Jack was stunned. He’d never been confronted by another guy about his behavior before. Come to think of it, he’d never shared anything like this with anyone. He felt surprisingly relieved. He nodded and responded thoughtfully. “So maybe I can get some help with this here?” The other men nodded with encouragement.

Conversations from the Heart

During his second month in the group, the topic of money came up, and Jack was particularly keen to speak about this. He couldn’t understand why Caroline constantly quizzed him about their financial situation, since, as he said, “She knows I bring in a six-figure salary. Why does she get so bent out of shape?” He was clearly angry and hurt about this. Stanley, a teacher, looked pained as Jack was speaking. I asked him if he’d be willing to share with Jack what was going on in his head.

“Mixed feelings,” he replied. “On one hand, I’d be angry, too, if my wife was badgering me, if I were bringing in six figures—which I clearly am not,” he said, smiling. “But,” he said, looking at Jack, “I have this feeling that there’s more to it. You’re so angry. There’s something else going on here, and I don’t know what that is.”

Jack was quiet at first. Stanley’s observation had struck a chord. He looked sad. “It’s just like what used to happen with my mom,” he said. “She was always putting my father down. He tried to support us and always sent money. Every time I tried to defend him, she put me down, too!”

Stanley didn’t miss a beat in responding. “So when your wife gets anxious about money, you react and go ballistic, or withdraw? Something like that?” He was being direct with Jack, but his voice tone was comforting.

“That’s right,” Jack responded. “I can’t hear her when she starts talking like that.”

It’s hard to know what impact a group intervention will have. When Rhonda and I spoke the next week, she reported that Jack had seemed more present in their couples session. He was able to let Caroline voice her anxiety about money and not take her feelings so personally. He even expressed some empathy for how terrified she felt when her mom would discover her dad had emptied the bank accounts during one of his gambling binges. My take was that Jack felt heard by the guys in his group, and, as a result, was better able to hear his wife.

After several months, Jack was calmer and more consistent in his marriage and with his kids. Bickering between him and Caroline still occurred occasionally, but it was resolved more quickly. Tension around money dissipated as they continued to discuss their finances regularly and openly.

We’ve found that therapeutic men’s groups that focus on developing emotional intimacy skills not only help men bond with each other, but also, as with Jack, help strengthen their marriages and other close relationships. This seems to echo Henry Ford’s praise for close male relationships: “My best friend is the one who brings out the best in me.”

This blog is excerpted from "Using Men's Groups to Enhance Couples Therapy" by Robert Garfield. The full version is available in the May/June 2012 issue, Emotion in the Consulting Room: What Should We Do When Clients Cry, or Scream at Each Other?