The Limits of Big Pharma

Psychopharmacology Has Plateaued. Does It Have a Future? 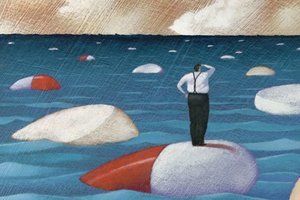 In the more than quarter century since the arrival of Prozac, the drug that Newsweek’s cover once declared the “breakthrough drug for depression,” we’ve seen the landscape of the mental health field transformed by the extraordinary growth of the psychopharmacology industry. Combined sales of antidepressants and antipsychotics in the United States accounted for less than $500 million in 1987, but annual sales today exceed $29 billion. Currently, 1 in 8 people regularly takes psychotropic medications, 10 percent of the entire population over the age of 6 use some kind of antidepressant, and antipsychotics have replaced cholesterol-lowering agents as the top-selling prescription drugs. While the number of people in psychotherapy has declined over the past decade, the multibillion-dollar advertising offensive waged by the drug companies year after year has succeeded in convincing the media and the general population that many psychological problems are primarily the result of chemical imbalances within the brain.

Amid the many controversies surrounding the influence of the drug companies on the quality of mental health care, one important fact about the medications brought to market over the past 25 years has received little attention—few represented any real advance in the science of psychopharmacology or any real expansion of our understanding of how to regulate the nervous system with chemicals. Almost all of the so-called “new” drugs have targeted the same mechanisms of action as those already in use, with only slight modifications in potency, receptor selectivity, metabolism, rate of absorption, or other pharmacokinetic properties. Almost none of these meds has proven to offer distinct advantages over existing, usually less expensive, agents.

Here, as in other aspects of the development of pharmacological approaches to mental health treatment, it’s important to acknowledge the role that business considerations, rather than scientific discovery or genuine improvements in treatment outcomes, play in determining what new medications come on the market and become available to clinicians. For the pharmaceutical industry, developing a me-too drug is less time-consuming and more profitable than developing a completely novel chemical entity aimed at a new target mechanism of action. From 1975 to 2005, the average cost to develop a new drug increased from $100 million to $1.3 billion (in adjusted dollars), with the cost for psychiatric drugs even higher. At the same time, the risk for failure continues to be steep. Nearly 80 percent of drugs fail to advance beyond Phase III, the last and most expensive preapproval phase of clinical human trials, because of lack of efficacy or safety concerns.

So what lies ahead for psychopharmacology? Where might the new advances come from? How will all our growing understanding of the brain and the nervous system and other kinds of scientific discoveries get translated into the development of more effective medications with fewer side effects? Will previously unrecognized forces for innovation lead to newer and better treatments? It’s always difficult to predict developments in any field, especially one as shaped by economic factors as psychopharmacology, but progress is likely to come in three broad areas: pharmacogenomic medicine, vaccination, and mind-altering drugs.

An area of investigation that may offer the most exciting prospects for the future is pharmacogenomics research, an approach that seeks to fine-tune medication choice to match a person’s genetic makeup. This approach focuses on the connection between a person’s genetic markers and the likelihood that they’ll respond to some drugs and not others. By identifying at the beginning of treatment what medications have the best chance of working, we can move past the scientifically imprecise trial-and-error and one-size-fits-all prescription practices of today. Using pharmacogenomics testing results to guide clinical decisions could also improve care and lower costs by reducing the time to therapeutic response and avoiding unnecessary and costly drug trials.

We haven’t developed any crystal balls to help us determine the perfect drug for a patient, but we’re beginning to identify genetic markers that can tell us whether a person is a slow or ultrarapid metabolizer of enzymes, and that can help us determine how different medications are likely to be broken down in that person’s body. This information can help us decide what drug might be best suited for a given individual’s treatment. Such testing is still new—and, for many, too costly or simply unavailable—but we may one day reach the point where a simple blood test could be used in the standard prescription process, rather than the often unsystematic and intuitive procedures in use today.

One of the greatest medical breakthroughs of the last century was the development of safe and reliable vaccines, which virtually eradicated diseases such as smallpox, polio, diphtheria, tetanus, measles, mumps, rubella, and chickenpox. Might there be a role for vaccines in mental health? Vaccine development has shown promise in the treatment of substance abuse. This approach is based on the established finding that the faster a substance can enter the body, cross the blood–brain barrier, and activate the target neurotransmitters, the higher its potential for becoming addictive. Researchers are studying whether giving patients a medication that primes their immune system could slow down the rapid access of that drug into the brain and therefore reduce that substance’s reinforcing properties. As a result, ingesting that substance would produce an antibody that would reduce the brain’s response. Currently, clinical trials looking at nicotine and cocaine vaccines are under way.

A somewhat controversial area of psychopharmacology is cosmetic psychiatry, a term that refers to the use of drugs to achieve a more enhanced or desirable state. One example is the use of the antidepressant Wellbutrin for its effects of increased energy, motivation, and sex drive. Another is using Provigil for its ability to augment alertness and its cognition-enhancing effects. In our highly competitive, achievement-oriented society, it’s inevitable that interest in the clinical use of cognitive and other performance enhancers will increase.

With the medicinal use of marijuana already legalized in 22 states, we’re likely to have more and more open discussion of the therapeutic uses of other recreational and currently illicit drugs. Already there’s a growing discussion of whether marijuana has a valid medicinal use in alleviating psychiatric symptoms. Many patients with depression, anxiety, and bipolar disorder claim that the recreational use of marijuana improves their mood and reduces anxiety, but there’s still no data to support such claims. Nevertheless, several states already list PTSD as a qualifying condition for the use of medical marijuana.

Whatever the message of drug-company advertising, it’s still clear that psychotropic medications target symptoms but don’t cure diseases or speak to all the needs that bring people to therapy. Thus, psychopharmacology hasn’t made the psychotherapists of the world irrelevant, nor is it likely to anytime soon. Therapists also need to be aware of a range of other approaches that are proven to help clients regulate their own nervous systems and navigate life’s challenges. These approaches include exercise, mindfulness techniques, and mind–body practices. For now, with no new generation of magical pills—or any other kind of magical solution—on the horizon, that kind of broad perspective would appear to be the knowledgeable practitioner’s wisest alternative.

Talia Puzantian, PharmD, BCPP, is a clinical psychopharmacology consultant in a private practice based in southern California and works with clients globally. She lectures in various continuous education programs to health professionals across the country, reviews for Pharmacotherapy, and writes for The Carlat Psychiatry Report.

This blog is excerpted from "The Meds of the Future," by Talia Puzantian. The full version is available in the July/August 2014 issue, Open Wide! Do We Know What Big Pharma is Giving Us?

It's mind blowing that you didn't address MDMA or psilocybin in this article.