Mastering the Tango of Love 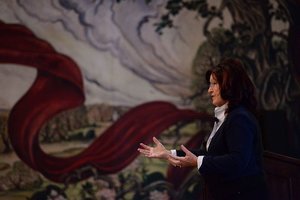 I’ve been studying tango for years, both because I love it and because of the lessons it keeps teaching me about emotional and physical connection in relationship. A few months ago, I had the opportunity to tango with an accomplished dancer who had exotic ways of moving his body and all kinds of frills in his technique. Initially, it was exciting, but I soon found myself feeling detached as his partner. Then I danced with a man who seemed much less technically skilled and couldn’t do anything close to the steps of the first man, but he engaged me as a partner in a completely different way. It was the difference between dancing in my own bubble and sharing a moment with someone else. With the first partner, I had to match his fancy performance moves, which, while varied and novel, quickly became emotionally predictable. But with the second, far less skilled partner, I never knew what was going to happen next because he was picking up from me as much as I was picking up from him. Any time I started to lose my balance just a little bit, I could feel him right there with me, and we readjusted. There was one move in which I had to step around him while we shaped our bodies together. By then, we’d established our connection and were completely in sync, attuned. It was such a thrill—and this is what gives tango that erotic edge.

I saw the same thing recently in the Netherlands watching two swans in a mating dance. There was this beautiful synchrony between them, as if they were testing out, “Will you respond to me? Are you accessible to my cues? Can I engage with you in a way that’ll create this thing that’s bigger than both of us?” The research shows that secure attachment potentiates synchronous dancing together, whether in or out of bed. Of course, sex can be separated from bonding—it can be recreational or just simply thrill-seeking—but the more integrated it is with attachment, the more nurturing it becomes.

If you’re going to help a couple get closer and learn to really dance together, whether in bed or anywhere else, the key is helping partners experience bonding moments that open them to becoming emotionally accessible to each other. If you can do that, their bodies will follow, and sex will almost always improve. The first step is turning down the emotional threat in the relationship and turning up the partners’ ability to reach for each other, physically and emotionally. Emotionally Focused Therapy (EFT) takes a different approach from models that assume the primary problem for couples who’ve lost their sexual connection is that they’ve become too familiar with each other. When couples come in and say, “We get along fine and we’re friends, but we just don’t have a very good sex life,” I begin by asking, “Show me what that friendship looks like. Show me what ‘get along fine’ looks like.” In other words, they might not be fighting World War III, but “getting along fine” isn’t secure attachment. In fact, these relationships usually have many disconnections and negative patterns.

As a therapist, I want to know who reaches out for whom and how that person responds. I look at the way people connect and how they disconnect, both emotionally and sexually. Often you’ll see somebody who’s withdrawn in the relationship, usually a man, who won’t pursue his partner emotionally at all, but will reach out for sex. Then it’s often the case that he gets turned down because his wife isn’t open to his responses. Work with a couple like that might begin with helping him turn to his wife and say, “I feel like I’m losing you and I don’t even know how to talk to you about it. But I really do want to be close to you.” If you can get through to this kind of guy, he’ll say to you, “I don’t know how to do the emotional thing. She thinks when I come onto her that I just want an orgasm---and I don’t. I want to feel desired, to know that she loves me and that I matter to her.” I’m always moved by that, because in other words, he’s saying, “The only channel that’s open to me is to come on to her sexually.” But in fact, underneath that, there’s all this desire for closeness.

Many couples live their lives as good roommates who can cooperate on a task but don’t have much emotional intimacy. That sort of familiar roommate stuff certainly deadens eroticism. But I believe the way back into eroticism is through more intense connection, not primarily through just adding more excitement and novelty to their sex life. I focus on how partners engage each other and ask questions like “When do you feel close? What do you do when you feel vulnerable?” I’ll say, “Tell me about the closest time you’ve had in the last few months. Tell me about what you do when you don’t feel all that good about this relationship.” Of course, I’ll also ask, “What happens in bed? How does he come on to you?”

Maybe she’ll say, “Well, he begins by saying, ‘It’s Saturday. We’re supposed to make love on Saturdays.’” And she’ll tell me that she knows exactly what’s going to happen, and that it’s going to take about 15 minutes. She may even describe how they both have their orgasms. But then I’ll ask, “Then what happens?”

“So you lie there in the dark?”

“And I’ll ask myself, Is this all there is?”

“You look sad as you say that.”

“Well, I’m all by myself.” She’s talking about the relationship and the lack of real resonance and emotional accessibility with her partner.

In EFT, those moments of disconnection can be the starting point for change and it’s important to work them like a piece of putty. So I’ll say, “Have you ever told him that somehow after you’ve made love—even though it’s sort of pretty good lovemaking on one level—you lie in the dark and feel sort of...could you help me? What’s the word?”

“Empty. I lie in the dark and I feel empty and alone.”

“Have you ever told him that?”

What she’s really saying is “I don’t feel safe enough to engage on the level where real eroticism happens.”

The best definition I know of passion is that it’s basically longing for physical and emotional connection, linked to intense attunement that allows you to improvise and play erotically with the potential for experiencing something that’s truly thrilling. So when people say to us in EFT, “I don’t feel sexual anymore. I’ve lost my passion,” we don’t really worry too much about it. It’s almost like I say to myself, Oh, yeah? Well, wait until I help you begin to tune into this emotional music again and connect. After all, we’re all mammals, for whom sex is a natural bonding behavior. That’s just the way our nervous systems work.

You could say that the whole of EFT, whether you’re dealing with emotional or sexual issues, is being able to pinpoint those painful moments of being alone, abandoned, disconnected. Then, once you can help partners see those moments of disconnection for what they are, you can help them reach out and create bonding moments, in which they realize that they’re both caught in a negative dance of distance, and they’re both in pain. And just like in the tango when you become unbalanced, you can reach out and balance each other.

Once couples in therapy have begun to experience more safety with each other, you can help them take more risks in exploring their sexuality. You might say, “It sounds like you’re connecting more with each other. Is that translating into the bedroom? How are you making love?”

And they might say, “Well, it’s kind of better, but I’m still holding back a little bit.”

“So when do you hold back and how do you feel as you talk about this?”

And often one of the partners might say, “I want to tell him about my fantasy life, but I’m scared.”

“So what’s the worst thing that’s going to happen?”

And so then we work with that. And we help her feel safe enough to tell him what she’s thinking. And then we help him respond. People always think their partner’s going to get really rejecting. But my experience in those situations is usually the partner sits there like a deer in the headlights and goes, “What am I supposed to do now?”

Secure attachment allows partners to explore more freely in all areas of experience. In the arena of sex, I have an exercise in which I invite partners to write down their most exciting fantasy of what they’d want to experience in lovemaking and share it with each other. In my experience, women often have fantasies of submission but in the context of safety. I remember one woman saying, “I don’t want to be smacked or hurt. It’s almost like I just want him to come and get me.” So we help people share their fantasies and as they do that, they discover things they were never aware of before. It’s just like in the tango, where both partners start to discover themselves in the dance and help each other shape that emotional experience. And I think it’s the same thing in good lovemaking. If I feel safe enough with you to ask you for what I need, I’m able to allow myself to become more aware of my own needs and longings.

This article is excerpted from "The Dance of Sex," by Susan Johnson. Read the full verson in our January/February 2016 issue, Speaking of Sex: Why Is It Still So Difficult?

Read more FREE articles like this on Sex & Sexuality

Can't get enough of the Networker? Subscribe to Psychotherapy Networker Today!  >>