The Healing Power of Childhood Memories

Peppering "Little Doses of Happiness" Into Your Daily Life 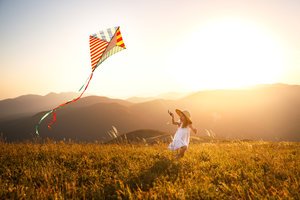 My experience as a therapist had shown me many times over that if you really want to help people open a doorway to a different way in life, therapy needs to give them powerful experiences—positive ones. Low-energy encounters with a therapist just don’t make enough of an impact to create real change. So I’d even gone so far as to create retreats where people could swim with wild dolphins, pet whales, and firewalk. These were certainly powerful experiences, but they didn’t have the staying power I was looking for.

I decided that the most powerful and effective way to get therapy off on the right note was to help clients access the power of the hope and openheartedness that’s embedded in childhood. As a result, I developed ways of helping clients access intense memories of positive childhood experiences that could jump-start the therapy process.

Rosemary had made the call to my office for a session at her husband’s prodding because she’d lost interest in sex, but she confided that a lot more than just sex didn’t interest her anymore. She felt increasingly that her life had no meaning.

“All I do is take care of other people, and I’m tired and worn down,” she told me. “I used to be passionate about so many things, but now I feel as if I’m just going through the motions.

”She was clearly ambivalent about being in therapy and was sitting in my office only to appease her husband. I knew that if I didn’t find a way to get her solidly hooked, I could easily lose her.

Rosemary began by talking about her weight and her inability to control her bingeing. She knew she was using food to calm her anxiety and mask her depression, and she hated herself for it. I offered guided meditation as a way to help with her anxiety, but she was worried that she wouldn’t be able to do it right. When I assured her there was no right or wrong way to meditate, she reluctantly agreed to try it.

Increasingly, we wove guided meditation into her sessions, and she began to reap benefits from it. But even though she reported feeling calmer and more clearheaded, I sensed we were just scratching the surface. I broached the subject of tapping into a positive childhood memory, reminding her of the healing potential these happy snapshots could have for her and what a dramatic effect they could have on her life. I explained that I suspected it’d been too long since she’d felt the kind of fun and freedom she must’ve felt as a child, at least at times. Even in the midst of a childhood of abuse, I told her, there are nevertheless powerful moments of joy.

Want to help your anxious and depressed clients go even deeper? Download our FREE worksheet on Internal Family Systems and get started today!

We agreed that even though she was in a trancelike state, she could continue to talk to me, letting me know what she was experiencing as we went.

I could see that Rosemary was relaxed. She was breathing deeply. “I see some trees,” she said softly.

“Great. How does that feel?” I asked her.

“Great. So just move into that experience,” I instructed.

“That’s fine. Just allow yourself to be with those trees and see what happens.”

“I think I’m with some friends,” she whispered.

“Just see yourself there with your friends.”

“About how old are you?”

“Maybe 10 or 11. We’re playing by the creek. This is where we used to cannonball into the water.”

“Great,” I said. “Just allow your experience to flow.”

“We’re swinging on a rope.”

“Let yourself be with that. Really dive into it,” I suggested, asking her to step back into that 10- or 11-year-old body, to smell the air around her and feel it on her skin. I asked her to feel the rope in her hands, to feel the water when she hit it.

Once she was fully engaged in the memory, I asked her how strongly she was experiencing the memory on a scale of 1 to 10. She said she was at a 3. I asked her to see if she could turn up the volume. As she did, I watched her face become increasingly animated even though her eyes were still closed. The corners of her mouth slowly broke into a smile, and a light filled her face. It was like watching the sun rise across her features. Gradually she reached an 8.

“I feel it! I feel it like it’s happening now,” Rosemary beamed. “I mean, I really feel it!”

She stayed with the memory, fully relishing it. When it was time to finish, I asked her to notice her body, to feel the energy in every cell of her being, and to let the memory fade while still maintaining the feeling state. Rosemary’s face was radiant as she opened her eyes, returning fully to the room. “I haven’t felt that alive in years!” she exclaimed.

This session was the turning point of Rosemary’s treatment. She’d tasted something she didn’t know she wanted, something she thought she was beyond feeling. She was now a woman on a mission to infuse that aliveness and vibrancy into as much of her present life as she could. I asked Rosemary to include this memory of childhood joy in her daily meditation and to come back to it as often as possible, even if only for several moments, throughout her day. We talked about her using this memory as a way of peppering little doses of happiness into her life. In time, this peppering would add up and begin to put her progress on a fast track.

In the following weeks, we found other positive childhood memories Rosemary could use. We found that she could anchor some of these memories by replicating the physical motions of some of her childhood activities, creating shortcuts—or portals—to certain felt states.

In my work with Rosemary, I used many modalities and techniques: Gestalt therapy, EMDR, trance work, inner-child work, yoga, and journaling. However, the use of positive childhood memories became the cornerstone of our work and formed the container for her trauma work. These positive visceral childhood memories raised the bar for Rosemary’s treatment outcome as the strong pleasurable emotion they evoked increasingly became the goal of her therapy.

Rhegina Sinozich, LCSW-C, is a psychotherapist in private practice. She’s the founder and director of BalloonToTheMoon.com and the author of Balloon to the Moon: A Guide to Vibrant Living, Plug Yourself into the Frequency of Happiness, and a series of guided meditation CDs. She’s a continuing education trainer, an international speaker, and a workshop facilitator.

This blog is excerpted from "Rediscovering Happiness" by Rhegina Sinozich. The full version is available in the May/June 2015 issue, Burnout: New Approaches to Rekindling the Flame.

Hi there! Great article you have, I would also want to share my thoughts that Meditation indeed has positive effects not only in the body but also in the mind, a total holistic wellness that brings us to know our inner-self better. It gives us a peace of mind that helps us have a much better perception about our lives. Our advocacy is to promote the positive effects of meditation, yoga and inner wellness.