...And the Transformative Session That Inspired Its Creator 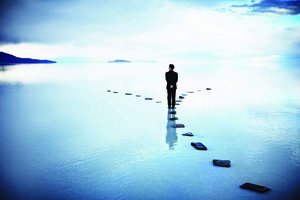 Cognitive behavioral therapy (CBT) is arguably the most successful therapy ever developed. In only about 40 years, it’s gone from the almost accidental innovations of two disenchanted psychoanalysts to the most widely practiced and promulgated approach in the world. For space aliens who’ve never heard of CBT, a quick and dirty definition may be in order. CBT—not a single model, but a constellation of short-term, pragmatic, goal-oriented clinical techniques, used in varying ways in different circumstances with people suffering from different conditions—is based on a simple axiom about human experience: how we think and perceive hugely influences how we feel. Independently coinvented by Aaron Beck and Albert Ellis, the clinical method rests on a kind of Socratic questioning (with lots of homework!), which helps clients identify and correct the inaccurate, defeatist assumptions and distorted thinking patterns that keep them stuck in a perpetual round of self-reinforcing unhappiness.

Taught in almost every clinical psychology and psychiatry program in the United States, CBT dominates the field in North America, much of Europe, and increasingly, Asia and Latin America. It’s essentially the “official” therapy of the healthcare arm of the US Department of Veterans Affairs, which has in place a national staff-training program for treating depression—the largest such program in the country. Managed care and insurance companies love CBT for obvious reasons: it’s brief, usually 16 sessions or fewer, thus much cheaper than that once-famous other brand, psychodynamic therapy. It’s also reassuringly protocol-driven, sticking to a plan without wandering all over the place for years at a time. But what really stands behind its extraordinary rise is, and always has been, its claim to be far and away the most empirically supported therapy out there.

Where did this streamlined, efficient, practical therapy come from that would prove such a good match for our fast-paced, high-tech civilization? CBT’s founders, Beck and Ellis, began their careers as true believers in the great 19th-century Church of Psychoanalysis, but they lost their faith and became radical dissenters. Both came to believe that whether the causes of emotional suffering did or didn’t lie in buried unconscious impulses and repressed motives was irrelevant. What sustained unhappiness and turned it into an unshakeable habit, they hypothesized, was a pattern of distorted thinking and false, self-defeating beliefs. Ellis argued that we’re largely responsible for our own unhappiness because we cling to irrational beliefs, which prevent us from accepting life as it comes and ourselves as we are.

Beck was more a clinician-scientist than a philosopher-sage, and certainly a far more modest presence than Ellis, but he, too, came to embrace the belief that by working hard at thinking about their own thinking, people could figuratively pull themselves up from despair by their own mental bootstraps. As Beck tells it, he more or less accidentally stumbled upon his own revolution. In a now-legendary story, he was analyzing a young woman who spent her sessions describing in lurid detail her action-packed sex life while Beck sat quietly behind her taking notes. At the end of the session, he asked her in good, neutral analytic style how she felt.“Very anxious, Doctor,” she said.

Beck gave her the standard formula: she felt anxious because she believed her sex life was unacceptable and feared disapproval from him, the community, her family, and so forth.

As Beck probed, she finally admitted that she wasn’t anxious about her reputation, but about whether she was boring him; in fact, she worried continually about boring everybody in her life. It wasn’t the sexual material, but her mistaken thoughts about how tedious a person she was that stirred up her anxiety.

**********************************************************************************
CBT may be a proven approach, but getting kids interested in therapy is another story. Here's a FREE printable CBT worksheet for kids that's engaging AND practical!
**********************************************************************************
Once Beck began helping her examine the belief and the entire lack of evidence for it, her anxiety rapidly diminished. From this small acorn of revelation, a mighty forest began to sprout. He began asking other patients, while they sat up in front of him rather than lying down on the couch, about their thoughts, uncovering poisonous streams of transitory, barely conscious self-talk—negative, pessimistic, self-disparaging, distorted, even including blatant misinterpretations of what he had said to them—that lavishly fed their anxiety and depression. Amazingly, his patients rapidly improved. People he’d been seeing for years would get drastically better after only 10 to 12 so-called cognitive sessions and leave analysis.
But ask the average therapist what he or she thinks about CBT and you’ll likely get several predictable responses. They don’t really believe that “lab therapy,” with its strictly exclusionary criteria limiting samples only to the “purest” cases, has much relevance to the heterogeneous clients they see every day, each with multiple diagnoses and a jumble of symptoms. These critics are usually inclined to see therapy more as art than science anyway, regarding therapy as a special kind of relationship, requiring the kind of people skills they assume aren’t really necessary for following a protocol. That’s why they got into therapy in the first place.
Still, proponents argue that far from being a kind of ersatz therapy by automatons for automatons, CBT at its best is a humane, compassionate, and rational approach, which both accepts and validates people’s emotional pain, while gently showing them what else is in their brains. Further, in a psychological climate of opinion that’s perhaps overvalued emotionality and a touchy-feely approach to relieving suffering, they offer a precise, step-by-step method that zeroes in on what sorts of thoughts keep human misery well fueled, while demonstrating that even the most depressed, anxious, and otherwise unhappy people maintain their capacity for reason, for acquiring the mental tools to free themselves from their own suffering. Certainly it might be worth 10 to 16 sessions to try out. After all, the meds will still be there if it doesn’t succeed.
***
Mary Sykes Wylie, PhD, is a senior editor at Psychotherapy Networker.
This blog is excerpted from "The CBT Path Out of Depression," by Mary Sykes Wylie. The full version is available in the November/December 2014 issue, Depression Unmasked: Exposing a Hidden Epidemic.

Why do we have to point to the farthest pole of critics of CBT ? For me it's not that CBT is wrong or inefficient - I use it all the time and it does work. But if a client only thinks the problem is their thoughts, without any insight into how these thought got into their brains, then I feel they are missing a piece of the puzzle. I believe that distorted thoughts don't just happen out of nowhere -- the thoughts are ways our human brains interpret and cope with negative experiences from our earliest moments of life and the important 5 -10 years of developmental milestones we encounter as humans. Nature and nurture have their roles in this and I feel this important educational and compassionate exploration of those experience that help clients understand their negative talk and distorted thinking. So it ALL matters and CBT can exists along side interpersonal enlightenment.