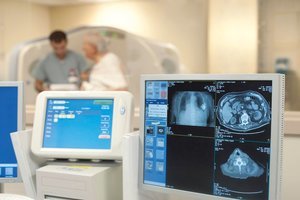 One October afternoon three years ago while I was visiting my parents, my mother made a request I dreaded and longed to fulfill. She had just poured me a cup of Earl Grey from her Japanese iron teapot, shaped like a little pumpkin; outside, two cardinals splashed in the birdbath in the weak Connecticut sunlight. Her white hair was gathered at the nape of her neck, and her voice was low. “Please help me get Jeff’s pacemaker turned off,” she said, using my father’s first name. I nodded, and my heart knocked.

Upstairs, my 85-year-old father, Jeffrey, a retired Wesleyan University professor who suffered from dementia, lay napping in what was once their shared bedroom. Sewn into a hump of skin and muscle below his right clavicle was the pacemaker that helped his heart outlive his brain. The size of a pocket watch, it had kept his heart beating rhythmically for nearly five years. Its battery was expected to last five more.

After tea, I knew, my mother would help him from his narrow bed with its mattress encased in waterproof plastic. She would take him to the toilet, change his diaper and lead him tottering to the couch, where he would sit mutely for hours, pretending to read Joyce Carol Oates, the book falling in his lap as he stared out the window.

I don’t like describing what dementia did to my father—and indirectly to my mother—without telling you first that my parents loved each other, and I loved them. That my mother, Valerie, could stain a deck and sew an evening dress from a photo in Vogue and thought of my father as her best friend. That my father had never given up easily on anything.

Born in South Africa, he lost his left arm in World War II, but built floor-to-ceiling bookcases for our living room; earned a Ph.D. from Oxford; coached rugby; and with my two brothers as crew, sailed his beloved Rhodes 19 on Long Island Sound. When I was a child, he woke me, chortling, with his gloss on a verse from “The Rubaiyat of Omar Khayyam”: “Awake, my little one! Before life’s liquor in its cup be dry!” At bedtime he tucked me in, quoting “Hamlet”: “May flights of angels sing thee to thy rest!”

Thanks to advanced medical technologies, elderly people now survive repeated health crises that once killed them, and so the “oldest old” have become the nation’s most rapidly growing age group. Nearly a third of Americans over 85 have dementia (a condition whose prevalence rises in direct relationship to longevity). Half need help with at least one practical, life-sustaining activity, like getting dressed or making breakfast. Even though a capable woman was hired to give my dad showers, my 77-year-old mother found herself on duty more than 80 hours a week. Her blood pressure rose and her weight fell. On a routine visit to our family doctor, she burst into tears. She was put on sleeping pills and antidepressants.

The decision fell to my mother—anxious to relieve my father’s pain, exhausted with caregiving, deferential to doctors and no expert on high-tech medicine. When given options by doctors, she said yes. One of the most important medical decisions of my father’s life was over in minutes. Our doctors were notified by fax.

I believe that my father’s doctors did their best within a compartmentalized and time-pressured medical system. But in the absence of any other guiding hand, there is no doubt that economics helped shape the wider context in which doctors made decisions. Had we been at the Mayo Clinic—where doctors are salaried, medical records are electronically organized and care is coordinated by a single doctor—things might have turned out differently. But Middletown is part of the fee-for-service medical economy. Doctors peddle their wares on a piecework basis; communication among them is haphazard; thinking is often short term; nobody makes money when medical interventions are declined; and nobody is in charge except the marketplace.

And so on Jan. 2, 2003, at Middlesex Hospital, the surgeon implanted my father’s pacemaker using local anesthetic. Medicare paid him $461 and the hospital a flat fee of about $12,000, of which an estimated $7,500 went to St. Jude Medical, the maker of the device.

It was a case study in what primary-care doctors have long bemoaned: that Medicare rewards doctors far better for doing procedures than for assessing whether they should be done at all. The incentives for overtreatment continue, said Dr. Ted Epperly, the board chairman of the American Academy of Family Physicians, because those who profit from them—specialists, hospitals, drug companies and the medical-device manufacturers—spend money lobbying Congress and the public to keep it that way.

The system rewarded nobody for saying “no” or even “wait”—not even my frugal, intelligent, Consumer-Reports-reading mother. Medicare and supplemental insurance covered almost every penny of my father’s pacemaker. My mother was given more government-mandated consumer information when she bought a new Camry a year later.

And so my father’s electronically managed heart—now requiring frequent monitoring, paid by Medicare—became part of the $24 billion worldwide cardiac-device industry and an indirect subsidizer of the fiscal health of American hospitals. The profit margins that manufacturers earn on cardiac devices is close to 30 percent. Cardiac procedures and diagnostics generate about 20 percent of hospital revenues and 30 percent of profits.

Then came the autumn day when she asked for my help, and I said yes. My father drifted into what nurses call “the dwindles”: not sick enough to qualify for hospice care, but sick enough to never get better. He fell repeatedly at night and my mother could not pick him up. Finally, he was weak enough to qualify for palliative care, and a team of nurses and social workers visited the house. His chest grew wheezy. My mother did not request antibiotics. In mid-April 2008, he was taken by ambulance to Middlesex Hospital’s hospice wing, suffering from pneumonia.

On a Tuesday afternoon, with my mother at his side, my father stopped breathing. A hospice nurse hung a blue light on the outside of his hospital door. Inside his chest, his pacemaker was still quietly pulsing.

Katy Butler is a features editor for the Networker and has contributed to The New York Times Magazine, where this article first appeared. © 2010 by Katy Butler and The New York Times. She lives in Mill Valley, California, and is the author of Knocking on Heaven’s Door: A Daughter’s Journey Through Old Age and New Medicine.

This blog is excerpted from "Unhappy Endings," by Katy Butler. The full version is available in the July/August 2011 issue, The New Grief: Are We Casualties of Medicine's War on Death?

This is article is a reflection of my worst nightmares for myself. I have seen 4 aunts, my mother, my mother in law and several other elder, who eventually died in their late 80's and 90's "living" for years in good nursing homes, being treated by good doctors, well taken care of, but not really living. I am intending to figure out how to avoid the cascading downward spiral (once it starts, it never reverses course) of expense and burden on children and loved ones, just to prolong the end for a few months or a few years. I will have a plan. This will not happen to me. I just need to find like minded people with whom to make a good plan that works without having to rely on others to carry it out.

This article literally hits at the heart of our U.S. problems and need for healthcare reform and socialized medicine as opposed to Medicine as a capitalist opportunity.

Hospitals expect patients for surgery to have a living will. But, when the patient, my husband, had surgery for aortic valve replacement, they ignored his living will. I found "full code' on his computer monitor! Oh no, I told them: DNR! Do not resuscitate was what he wanted. Nevertheless, even though the surgery was successful, he experienced a stroke post surgery from dislodged plaque. They kept him in a coma, alive, artificially for a week on various mechanical devices, until I was given two magic words from my daughter: Palliative Care. I would have asked more crudely that they remove all these devices, and let him die in peace, but the magic words produced what was needed. He was given sedative sufficient that he felt no pain; after about an hour his breathing slowed, he did die in peace, and we, his daughters and I were able to respect the terms of his living will. So, what I would like to share is that Palliative Care can be given within a hospital setting, but you do have to ask for it. Palliative Care was a blessing and a relief.