Learning to Relish the Challenge

A Motivation Expert Weighs in on the Downside of Overpraise 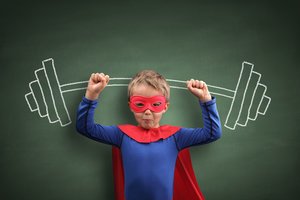 Who can resist feeling self-satisfied over an A+? Isn’t a score of 100 percent a trophy-rewarding talent? Shouldn’t we praise children, students, clients, and ourselves for being smart people who earn top marks?

According to renowned motivation expert Carol Dweck, Stanford professor and bestselling author of Mindset, the answer is no. Over the past few decades, she’s produced a widely influential body of research that’s shown how all too often praising intelligence creates fragile people, devoid of resilience and motivation. Her work has attracted growing attention among parents, educators, and mental health professionals by demonstrating that, rather than focusing on talents and abilities, it’s far more important to enhance people’s ability to tackle adversity and persevere. In other words, reward hard work and good strategies, not talent.

In the following interview, Dweck discusses the implications of her research for psychotherapy.

RH: Your work is based on the overriding importance of mindset in helping people deal with life’s ups and downs. How did you first get interested in that subject?

DWECK: My research started out looking at how people cope with failure and setbacks, especially students who were asked to solve challenging problems. Some students acted as though a failure was a catastrophe, while others actually relished the challenge. I was particularly interested in the latter group. I vowed that I’d figure out what their secret was and try to bottle it.

RH: So what turns out to be the main difference between those who relish the challenge and those who remain fixed on the outcome?

DWECK: It comes down to whether you focus on growing your abilities, as opposed to proving and validating them all the time. When you’re in what I call a fixed mindset, your goal in life is to prove you’re a smart, competent, worthwhile person and avoid doing things that could undermine that image of yourself. In the growth mindset, you believe these abilities and talents can always be developed, so you’re not on the spot every second to prove yourself, and you can focus on developing those abilities through taking on challenges and seeing them through.

RH: As a clinician, I can see how the fixed mindset could contribute to guilt, regret, and shame in our clients.

DWECK: All of us are a mixture of fixed and growth, but our research has shown that when people think their personal qualities are fixed and they experience a rejection, they think, Oh, I’m not a likeable, worthy person, instead of How can I understand what happened? What can I learn from it? What can I do now? It’s the guilt and shame of I’m a bad person for having done something negative versus I don’t like what I did. It’s not consistent with my values. How can I act in a more consistent way in the future? How can I make up for it?

RH: I hear some overlap with cognitive behavioral therapy (CBT). Was that an important influence on your work?

DWECK: CBT is based on the idea that if you change beliefs, then emotions and behaviors can change, too; however, CBT often says, “Don’t think you’re not a smart person because you didn’t get an A on that test. Look at all the other A’s you got—you’re a smart person.” But we’re not saying that. In the mindset framework, we’re saying, “Get out of that smart-person framework entirely. Don’t just try to boost yourself up or beef yourself up within that same old problematic framework, get out of it. Stop thinking that the good or bad measures you, and think of yourself as a work in progress.” They’re asking you to find evidence to challenge the argument, and we’re saying it’s the wrong argument.

We love to celebrate genius and talent: the extraordinary young athlete, the chess prodigy, that sort of thing. But many of them fizzle out as a result. They think their whole claim to fame is being a genius, rather than accomplishing anything in the long run. So we have a whole line of research on how often praising intelligence or talent backfires and puts kids into a fixed mindset.

RH: Do you have any thoughts about how clinicians might be able to take some of this work into their office?

DWECK: A number of therapists have told me that a majority of their clients are grappling with having a fixed mindset: feeling inadequate, crushed by setbacks, and thinking of themselves unable to improve and grow. I think the idea of a growth mindset is central to the therapeutic process. It’s not just convincing someone they’re good, talented, worthy, but it’s showing them that the things that happen are opportunities for growth.

RH: Let’s say someone comes to therapy after a fight with a spouse and says, “I’ve failed again and fallen into that same rut.” You want them to see this as an opportunity for growth?

DWECK: Yes. I want them to think about what happened, what set the stage for it, what they can learn from it, and what they can do differently next time. In fact, we’ve done work on relationships showing that when people are in a growth mindset, they’re likelier to problem-solve when issues arise. When they’re in more of a fixed mindset, the more serious the issues are, the less likely they are to broach them—which puts the relationship in jeopardy.

The following blog is excerpted from "Smart Growth," by Ryan Howes. Read the full version in our September/October 2015 issue, Self-Compassion: Self-Indulgence or Self-Healing?