What Therapists Can Do to Lessen Its Impact 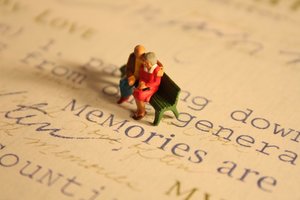 I saw my barber, Ray, yesterday, and he asked me if I wanted the senior discount. "Ray," I said, "How old do you think I am?" He was polite. "I'm not sure, but if you want the senior discount, you need to ask for it." At a mere 54 years, I insisted on paying the full charge.

I'm a youngster when it comes to longevity, but my barber's misjudgment and my mildly deflated ego caused me to reconsider the markers many of us use to decide whether or not we're old. For Ray, appearance was everything. And to look at me—the not-so-subtle signs of balding, the gray beard, and the errant hairs protruding from my ears and nose—told him I was a card-carrying senior citizen.

What really concerns me, however, isn't my appearance, but the internal processes that tell me I'm old. The signs and symptoms of memory decay are hitting the radar screen of middle-agers at a higher frequency than ever before. Maybe it's because the 21st century expects us to remember more and do it faster, like the stream of computer passcodes or personal identification numbers, which keep growing in length and complexity. Maybe it's because, in an aging population, the media have discovered Alzheimer's with a vengeance, and we begin fearing its onset in every forgotten name or word.

According to the 2010 Alzheimer's Disease Fact and Figures, an estimated 5.3 million Americans have Alzheimer's, including 200,000 persons under the age of 65. About 14 percent of Americans aged 71 and older have dementia, a broader label for memory diseases of aging, not specifically Alzheimer's—17 percent among women, 11 percent among men. Just because your mother or father didn't contract Alzheimer's disease doesn't mean that you're immune. The increase of average life expectancy puts even "long livers" into the high-risk category for memory impairment. The prevalence statistics increase in one's ninth decade, so if you yourself aren't afflicted with dementia when you're 80, the chances are that at least 20 percent of clients in their 80s will be seeking your help for it.

Since our population is aging, memory decline is something middle aged and older clients are increasingly bringing to therapists. In fact, the first thing that most clients who make an appointment with me want is reassurance that they don't have brain disease. Once that issue has been addressed, we have to help them—whether or not they have a medical problem—understand that memory is like any other bodily ability: it shows the signs of natural aging. Finally, we need to engage them, gently but firmly, in a realistic program of memory training, making it clear that if they want to improve their skills at recall, they'll have to know it's important to always work at it. No therapist, no neurologist, no expert of any kind has a magic potion or intervention that'll miraculously recover for them the memory skills they had at 18 or 25, or even 35.

From Memory Slips to Alzheimer's

Because memory treatment doesn't often follow a reimbursable diagnostic scheme, and because many older adults feel stigmatized by employing insurance benefits requiring a psychiatric diagnosis, many of my older clients choose to pay privately for memory-remediation therapy and prefer to think of it as educational assistance, or even expert coaching. My academic affiliation often makes it easier for me to engage with clients who have these concerns.

Even if tests indicate the presence of Alzheimer's or some other form of dementia, good therapists will stay engaged with their clients. As therapists, we can provide educational materials, apply strategies to improve or maintain memory when possible, help them manage the consequences of memory disease, help clients plan for the future, and train current (or future) caregivers in skills that address the client's issues.

Even though no pills or diets or physical exercises can return memory to its youthful proficiency, people actually have more control over memory loss than they think. The key to preserving memory in your later years is in knowing how to engage your existing resources to offset deficits. I call this active compensation. Persons who are best at compensating work at it the hardest. As therapists, we need to keep reminding our older clients that, even in the face of memory decline, they often have what much younger people don't: a fund of life experience, acquired wisdom, intellectual discipline, problem-solving abilities, and hard-earned realism about the world. Our older clients can bring these resources to bear on age-related memory loss. So while we aren't in the business of giving them back the steel-trap memories they had at 25 (any more than we can get our own memory capacity back), we can help our aging clients draw on their other cognitive skills and learn how to use these gifts to compensate for what they've lost.

Robert Hill, PhD, ABPP, has studied aging internationally through a Fulbright Fellowship at Maastricht University in the Netherlands. He's the author of six books, including Seven Strategies for Positive Aging and Cognitive Rehabilitation in Old Age.

This blog is excerpted from "Strategies for the Aging Brain," by Robert Hill. The full version is available in the September/October 2018 issue, Life After 2.0: Has the Digital Revolution Become a Relationship Revolution?