Therapy with a Storyteller's Mindset

Learning to "Enter the Scene" with Clients 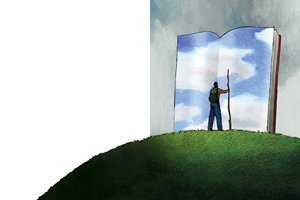 Frank slouches in the chair, one leg extended as the other pumps wildly. He’s entirely blue, in work denims and a blue shirt with his name embroidered on the pocket. His thinning hair is plastered to his head, and his eyes shift as he scans the pictures on my wall. Across from him, Linda, his ex-wife, sits ramrod straight, never touching the chair back. The dark circles under her eyes belie her smile. She wears a smoky gray suit and a stylish scarf. Her skin looks almost yellow from tanning.

Linda glances at Frank. “I didn’t think she’d let you come,” she says, referring to his current wife. Frank sighs deeply and shifts his weight, leaning away from his wife. Between them, sitting cross-legged on the couch is Pamela, 13, who wears a black T-shirt that reads “Don’t Be a Dick.” Her white-tipped, straight-black hair slides across her face, shading her blue eyes rimmed in purple mascara. She has a ring piercing her nose and dozens of bracelets on her arms. Looking blankly at me, she dares me to speak to her.

So it begins. Although a first family therapy session, it could just as easily be the first scene of a novel. I was an academic writer for years, but more recently, I’ve become a novel writer to satisfy my own need for a self-defining “something more.” When I sit at the computer, I start a process that’s easier to do than to explain. The words flow through my fingertips as if they had a life of their own, growing into sentences, paragraphs, chapters, and, somewhere along the way, maturing into a story. I often wonder where they come from.

That’s the kind of detail I want from Pamela and her family because to help them, I feel I must enter the scene; I must understand their reality from the inside out. So I start with detailed questions—What happened? What time was it? Who was with you? What happened first? What happened next? Who did you tell? How did your mother find out? What about your father? Did they talk to each other?—and so on, until I can close my eyes and be there.

Pamela explains best: “I told my mother I’d be at Jenny’s house, and Jenny told her mother she’d be at my house. And so we walked along the canal in the middle of the night, because no one would see us. It was cold as hell, but we were having fun and laughing, and the moon was out. We wanted to see Jeremy, who lives about three miles away. He’s like 15 and has great hair and is just mad cool. His parents don’t really care what he does, and by the time we got there, they were sleeping. He was so sweet to me; he talked real soft and put his arm around me and rubbed my back. I mean, no one ever treats me that good. Jenny got all jealous and pissed, and we had a fight. She said she was gonna go because she knew what Jeremy really wanted. Jeremy just laughed at her and said he was glad she left. We talked like forever, and he kissed me. And, I don’t know, he wanted to do it, and I thought, Well, I have to do it sometime, so I had sex with him; no big deal.” Pamela’s parents hold their breath at this, and Frank looks at Linda, as if to say, “Where were you?”

Pamela: “But then he turned into a total prick; I mean he told me to leave ’cause it was so late. And I didn’t know where the hell I was; I mean, I couldn’t go back along the canal, it was way too creepy without Jenny. So I just started walking down this road. I didn’t know how to get to my mother’s and, well, next thing I know, some cop is, like, shining this spotlight at me. And now, she won’t speak to me,” she says, nodding at her mother. “Whatever,” she concludes.

At the police station, Pamela called her father, who came to get her. It was 2:30 a.m., and Frank was in his pajamas, which somehow made Pamela feel he loved her: “I mean, like, there he was in his ratty, old, striped pajamas; just standing there. I can’t believe he did that for me. And, like, he didn’t even yell.” Frank’s eyes fill with tears when she says this.

The Joys of Not Knowing

In the twinkling of a story, I feel myself being drawn to them. I care about them, I’m curious about them, and I’m ready to go down the road with them, wherever it may lead. It’s the same way I feel about 50 pages into a novel I’m writing. By then, I’m completely committed to a sustained relationship with a whole new group of characters whom I don’t know very well, but who are enticing; characters who are slightly deformed below the surface, try to hide what they most need to share, make decisions they find hard to justify, struggle nobly, are connected to each other in painful and transformative ways, and sometimes defy life’s odds and flourish despite all of this. Together we work toward some resolution, partial though it may be.

When I leave my office at the end of the night or turn off the computer and let the page fade to black, and take the time to think about it, I notice something else that’s shared in my twin identities as a psychotherapist and writer. No matter the plotline or clinical problem, when it’s over and I look back on it, I’m always surprised that, at a basic level, it’s all been about hope. I don’t plan this, but as surely as robins return to my backyard feeders each spring, hope shows up. I don’t have to invite it. It comes. By hope I mean openness to possibilities, no matter how small, no matter how fleeting—openness to the promise of what may come and that it might not only be different, but better.

David Seaburn is a writer. He’s the author of More More Time and most recently, Parrot Talk.

This blog is excerpted from "The Stories We Live," by David Seaburn. The full version is available in the July/August 2011 issue, The New Grief: Are We Casualties of Medicine's War on Death?

Wow, David - I’m a Psychoanalyst and writer too and this piece is what I model myself after - gripping, engrossing, real and mostly focusing on what’s positive about what we do. Hope is so good. Thank you.