A Couple on Brink of Divorce Finally Learns to Show Vulnerability 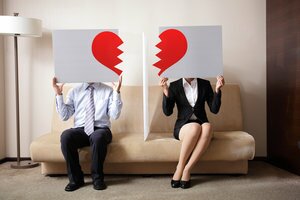 She stares at me with stony reserve. Tension and anxiety contort his face. They don’t look at each other. He shrugs and raises his eyebrows at me, as if to say, I don’t even know where to begin.

It’s my first session with this couple, and the room is thick with silence. It’s pierced only by the ticking of my clock, reminding me that I need a different timepiece—one whose sound isn’t so ominous in these moments. I stifle a sigh. Really, what are the chances that I can help these two? I’ve begun to doubt myself already.

“Honestly, I don’t know why I’m here,” Miranda spits out. “Actually, I do know. It’s for the sake of the kids. If we go through this—this therapy,” she says, looking at the floor, “then I can tell them I’ve tried everything.”

Ah, I think, it’s the let’s-do-therapy-to-say-we-tried syndrome. Strike one. She feels far gone in this relationship. I turn to Jeff.

“I get where she’s at,” he says, “but I want to try and make this relationship work. It’s been too bad for too long, and I don’t want it like that.” He looks desperate. “I don’t want to get a divorce.”

Forty-five minutes into the session and she still won’t look at him. “Dr. Irwin,” she starts, “he’s cheated on me since we started dating 25 years ago. Therapy didn’t help last time, because while we were in therapy, he was cheating!” Her words tumble out in a furious rush. “Why should I think it’s any different now? Honestly, would you trust him? Seriously, woman to woman, would you?” She leans forward, pressing me for an answer.

“Miranda, if I were you, I’d probably be feeling the same thing,” I say. "Of course I wouldn’t trust him. It makes a lot of sense to me that you’d be sitting here filled with doubt and anger—and that it’d feel tremendously risky to trust anything he says.”

Now I angle myself toward Jeff. I know I need to connect with him, or I’ll lose him. “I imagine it’s hard for you to show up here, knowing that whatever you say will be met with Miranda’s resentment,” I say. “And I hear you—you don’t want to lose your wife.”

Tears spring to Jeff’s eyes, and I see him struggling to swallow the lump that’s formed in his throat. “What’s happening for you right now?” I ask.

“I just have to try—whether she can believe me or not,” Jeff says, his voice breaking. “I’ve got to try to make it right.”

As Jeff walks into this more tender moment, Miranda’s jaw clenches. “And now he’ll say, ‘I’m sorry. I won’t do it again,’” she mutters. “He’s said it all before.”

Jeff shares his story of basically raising himself, since his father walked out on the family when Jeff was 2 and he essentially lost his mother to depression and alcohol. In these formative years, Jeff learned that since you can’t count on the people who should be there for you, you get comfort and care whenever and wherever it’s offered. His emotional survival depended on it.

Miranda tells of growing up in a violent home with a father whose rage had turned on her mother, and a mother who’d turned it right back on her daughter. “The shit rolled downhill in my family, and I was at the bottom of it,” she explains. Her survival depended on lying as low as possible, submerging any demands and needs of her own. It was safer to be invisible.

Are you treating couples who argue constantly? Is one partner "leaning out"? Is their romance on the rocks? Our FREE CE seminar with Sue Johnson can help!

Soon I understand that I sit before two people who’ve been deeply wounded from childhood. Can I avoid doing further damage to their precarious relationship? Do I tell Miranda to run for the hills? What if Miranda takes a leap of faith and decides to trust Jeff once more—and he betrays her yet again? Moreover, do I dare ask Jeff to reveal the fears and vulnerability he’s felt in this relationship, only to risk being filleted by his understandably embittered wife?

Several subsequent sessions unleash further expressions of Miranda’s frustration and anger with Jeff, as well as an exploration of what happens when either of them takes a risk to show their pain to one another. Each time we highlight Jeff’s blocks to seeing Miranda’s pain, we’re taken deeper into the despair he experiences when he sees how he’s hurt her. But he grows increasingly able to show his remorse—which leads Miranda to say, suddenly, to everyone’s surprise, “Jeff, you’re not a monster.”

This reassurance has a profound impact on Jeff. Tears well up in his eyes and his mouth quivers. This time, instead of telling me about how badly he feels for hurting his wife, he turns to her. “I’m so sorry, Miranda, for hurting you,” he whispers. “I see how I’ve hurt you. I never felt like I could let myself see that before. But here I am—I see it. I’m so, so sorry.”

After a while, Miranda takes a deep breath and turns to me. “I don’t know if I’ll get over all the years of pain,” she says. “But for the first time ever, I feel hope. Hope that it won’t always hurt so bad.”

Then she turns to Jeff. “Thank you,” she says in a whisper. I notice her hand squeezing his. Jeff closes his eyes and looks genuinely relieved for the first time since I’ve known him.

Of course, this poignant moment didn’t erase the years of hurt. But it did matter. It brought a new sense of hope, and right up alongside that hope came a new level of fear and risk. As critical as it was for Miranda to have her pain be seen by Jeff, it terrified her to be one step closer to him with less armor on. In turn, Jeff grew more anxious that he’d blow his chances of repairing his relationship with another mistake, no matter how small. The stakes suddenly felt higher than ever for him.

We had to work hard over many sessions to come back to this haven of connection again and again, to consolidate and strengthen it. But this hard-won moment was the baseline, a reference point they could come back to. For me, it will always be a reminder that even in the midst of so much pain and mistrust, even the most wounded couple can rediscover the possibility of a loving connection.

Silvina Irwin, PhD, has a private practice and is a certified supervisor and therapist in Emotionally Focused Therapy for Couples (EFT). She cofounded the EFT Resource Center.

This blog is excerpted from "A Glimmer of Possibility," by Silvina Irwin. The full version is available in the September/October 2015 issue, Self-Compassion: Self-Indulgence or Self-Healing?

Can you tell me in what issue I can find the rest of this article?
Thanks,
Anne