A Rare Moment of Self-Disclosure

Revealing Ourselves to Clients 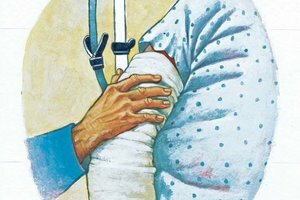 The first time I saw Michael, I could barely distinguish his form as human. A series of weights, counterweights, pulleys, and IV feeds and a ventilator were strapped to an immobile figure beneath tightly wound bandages and casts. Tubes and wires spilled over his bed. As a young man in his early 20s, Michael should have been at the pinnacle of good health, but several weeks before, he and his best friend, Tim, and Tim’s father had been cruising toward Oregon over the San Bernardino National Forest when the engine of their biplane had given out, and the three were sent plummeting into the mountain below. Rescuers pulled Michael from the wreckage bloody, broken, and barely alive. Tim and his father never made it.

At the time I met Michael, I was still new to clinical work. Specializing in neuropsychology, I’d already conducted many inpatient evaluations of people who’d sustained grave injuries to their brains and bodies. But the sight of Michael was unlike anything I’d witnessed before. I’d never seen a patient clinging to life so precariously, let alone one who was unable to greet me or participate in any kind of psychological evaluation. His doctors had induced a coma to give his brain time to heal, and nobody knew what kind of man to expect when it was lifted.

Over the next week, I stopped in to see Michael several more times and met some of his family members and friends. On one of these visits, Michael’s father caught my eye and motioned that he wanted to talk with me outside the room. His entire body trembled as he searched for words. “Michael’s mother and I, we’re just so worried,” he said before pausing for a moment. “We’re worried he might not make it. Even if he does, what’s his life going to be like? He just graduated from college, and that trip to Oregon was supposed to be his big celebration. He even had a new job on the horizon. What’s going to happen now?”

I didn’t have the answers myself, and couldn’t make any promises. In cases like Michael’s, I’d learned to be hopeful, yet realistic. Michael’s doctors, I told his father, believed he would survive, but there were no guarantees as to the state of his body and brain once he emerged from his coma and began more extensive recovery. Nobody knew what to expect.

On the day Michael’s medical team was to reverse the induced coma, the neurosurgeon paged me to assess his initial behavior. I knew that Michael would have little or no awareness as he emerged from the coma, and that it’d take time for his brain to be able to process and retain new information. But all of us breathed a sigh of relief as he came to. In the following weeks, his cognizance increased, and as he began to breathe and eat on his own, much of the equipment that had saddled him was taken away.

The more I got to know Michael, the more I admired his spirit. Whenever I entered his room, he’d greet me with a smile and cheerily ask, “How are you, Doc?” My psychoanalytic training had taught me that anything I shared about myself needed to be carefully selected and kept to a minimum. So typically, I’d smile back and then quickly turn the conversation to him. “How are you, Michael?”

Are you working with clients who've been through unspeakable trauma? With our Peter Levine Master Class, you'll learn proven strategies to help them recover

After assessing Michael’s cognitive functioning, I’d concentrate on how he was feeling. Sometimes he acknowledged his guilt for being the only survivor of the plane crash. “Why them and not me? I can’t imagine what Tim’s mother must be going through,” he’d repeat over and over. Sometimes, we talked about how he missed Tim; other times, we talked about his fears that he’d never walk again. But most of the time, he maintained he was “doin’ just fine.”

Given my other responsibilities at the hospital, my time with Michael diminished over the weeks that followed. When I did visit him, he continued to ask, “How are you, Doc?” Occasionally, he’d toss in a playful, “How am I, Doc?” But one day, as we neared the end of a session, he asked if he could have more time with me. From the look in his eyes, I knew this wasn’t a trivial request. We both paused. “How are you, Doc?” he asked again.

“No,” Michael said, now more energetically and sitting fully upright. “How are you really?”

He’d gotten my full attention. “Hey,” I said as gently as I could, “What’s going on, Michael?”

Looking directly at me, tears began to well in his eyes. He gestured at himself. “I want to know how seeing me like this affects you,” he said shakily. “Nobody will tell me what my accident was like for them,” he continued. “I can see in their eyes that they’re having a hard time with what I’m like now. They’re as worried as I am that I might never walk again or be as smart as I used to be. But no one will level with me. When I ask them how they’re doing, all they say is ‘fine.’ Just like you do.”

I began to tell Michael about the first time I’d seen him in the ICU and how hard it had been for me to find the person inside the mess of casts and bandages, so constrained and dependent on machinery. He turned away in frustration. We both knew this sanitized, impersonal answer wouldn’t suffice. “You have no idea what this is like,” he said. “You don’t know anything about what’s like for people who are paralyzed.”

Despite everything I’d been taught about turning questions about myself back on clients and keeping personal experiences under wraps, I took a leap of faith. One honest moment, I thought, deserved another. “Actually,” I replied, “I’m married to a man who injured his spine just before his 17th birthday. He’s spent decades in a wheelchair.”

Suddenly, tears began to stream down Michael’s face. “You’re saying you met and married your husband after he was already hurt?” he asked incredulously.

“There’s a lot I can’t tell you about what your course will be,” I responded. “But I can tell you that whether you recover a little more or a lot more, you have the potential to have a real life.”

“Including love and sex?”

“Including love and, yes, even sex,” I answered honestly.

I drove home from the hospital that day feeling as though something had shifted in me. It was as if all the lessons I’d learned about therapeutic neutrality had shielded not only my clients from me, but me from them. That day, I felt freer and more relieved to have shared such a precious moment with a client. Sometimes, I realized, my personal thoughts and feelings and shared experiences are the treatment. In the right situations, they can make the difference between despair and healing.

***
Deborah Buckwalter, PhD, is a clinical psychologist with a private practice and nearly two decades of experience in psychological and neuropsychological assessment and treatment.

This blog is excerpted from "Please Level with Me," by Deborah Buckwalter. The full version is available in the September/October 2015 issue, Self-Compassion: Self-Indulgence or Self-Healing?

I agree with you 100 % , I think sometimes our experiences can make a difference for clients, just like you did. I think it makes us more human and creates trust and a stronger therapeutic bond. Like everything it depends on the client and the circumstance. I think giving clients hope in their future is so therapeutic and that is what you did. Thank you for sharing. Mary

Thank you, Deborah, for sharing this article with us. It is incredibly moving and inspiring!