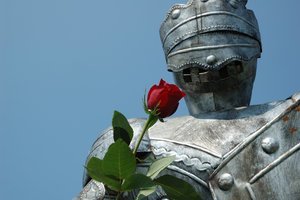 Most of the couples I work with are referred by clinicians who find the man to be "too resistant" for therapy to continue. Typically, when the guys come in, they're either defensively resentful, angry, or just emotionally shut down. Often they start right off by proclaiming that they're frustrated as hell with therapy. As we talk, it becomes clear that, initially, they practiced the communication techniques they were taught and took to heart the insights they learned about relationships and family of origin. Yet, for reasons they can't explain, they couldn't bring themselves to make the long-term effort to use their new skills or apply their consulting-room insights on a routine basis at home. Of course, this failure to follow through makes their wives even more disappointed in them: "It was one thing when I thought he couldn't do it; now I know he just won't!" noted one angry spouse.

But beyond the frustration and resentment of the men I see is their utter bewilderment. Despite their time in therapy, they still don't have a clue about what their wives and therapists want from them. Partly this has to do with having different expectations from their partners---men just don't buy relationship-improvement books or read women's magazines or watch Oprah. They find words like, connection, attunement, and validation mystifying, used less to enlighten than to point out their deficiencies.

Broadly speaking, the men who do come into therapy want to feel understood and appreciated as much as their wives, but therapy typically involves asking partners to go beyond generalized expressions of appreciation to acknowledge that each partner's point of view is reasonable or understandable in certain circumstances. The focus of most of today's couples therapies is "validation"---conveying an understanding that you experience your partner's mental and emotional states and that you value their experience. But the fact is that men often don't want their thoughts and deeper feelings experienced or valued by their partners, even if their therapists think they should want these things. Unless we develop a better understanding of the real, intrinsic rewards men can experience as a result of being in therapy, they'll just go through the motions or pursue their hidden agendas, like "Learning what I have to say to get laid."

For men to engage in the hard work of change, the rewards have to be automatic and visceral, independent of the artificial environment of the therapist's office and vague therapeutic concepts. They have to feel compelling reasons to change and, most important, to incorporate new behavior into their daily routine. I believe that the primary motivation keeping men invested in loving relationships is different from what keeps women invested, that it has a strong biological underpinning present in all social animals, and that it's been culturally reinforced throughout the development of the human species.

The glue that keeps men (and males in social animal groups) bonded is the instinct to protect. If you listen long enough to men talking about what it means to love, you'll notice that loving is inextricably linked, for many men, to some form of protection. If men can't feel successful at protecting, they can't fully love.

The survival importance of the instinct to protect makes it a potent factor in men's self-value. Men with families automatically suffer low self-value when they fail to protect loved ones, no matter how successful they might be in other areas of life.

Failure to protect drains meaning and purpose from the lives of family men. As a result, they often turn to some form of adrenaline arousal for motivation or stimulation---chronic resentment, anger, drugs, affairs, or compulsive behavior. When those prove insufficient, they succumb to a dispirited numbness or depression. I've never seen a depressed, resentful, angry, abusive, addicted, unfaithful, or compulsive man who didn't see himself as a failure at protecting his family.

Most of my work with couples centers on helping men come up with ways to approach expressions of emotional support and compassion as a form of protection. We start with enhancing a man's daily awareness of how his desire to protect his family gives meaning and purpose to his life. He signs an agreement in therapy to remind himself every day that the primary reason he does most of what he does is to protect his family.

Early in therapy, I ask men to come up with some brief, symbolic rituals that will build an awareness of the meaning and purpose of their role as protector into their daily routine. A few of my favorites include lighting a morning candle, posting "I love you" notes, putting a flower petal on his wife's breakfast plate, sending affectionate text messages, and writing one line of their favorite song every day. To increase the chances of compliance, the rule for the small rituals is that they're spread throughout the day and take less than two minutes total to enact. The goal is to build a mentality of caring over time.

It's actually exhilarating to help a man use his protective instinct to strengthen his vulnerability. It's exciting to watch him move from perceiving his wife's requests (and complaints) as indictments of his ability to protect to experiencing them as cues to activate his desire to protect. He can then see, hear, and support---that is, protect---the most important adult in his life. When he's able to do that, she feels validated. They both feel "connected," for want of a better term, even though they're in different emotional states and doing different things for different rewards. Rather than forcing themselves to act like the same instruments playing the same notes in a duet, couples who begin to interact in this way become like two different instruments playing different notes to create something together that neither can do individually---relational harmony.

This blog is excerpted from "Lions Without a Cause" by Steven Stosny. The full version is available in the May/June 2010 issue, The Secret World of Men: What Therapists Need to Know.

Interesting reactions evoked within myself,me specially since I appreciate the authors work. It is possible this may say more about my own preferences than generalities about men. As a gay man and couples therapist I am sometimes challenged by my own aversion to therapeutic interventions that support traditional gender constructs. Helping a man to become a more effective "protector" allows him derive his vitality to what he can do for the female. This reinforces the "dependency on women for 'feeling validation'"..*This in turn perpetuates an external power vs internal power and contributes to male fragmentation and domestic violence as postulated by in the seminal article "The Broken Mirror" published in David Wexler's book, ( I think) the title is "Domestic Violence 2000". This fascinating article looks at the Power and Control Wheel not so much through the political analysis / lens of male privilege but rather through a psychological frame drawing on the concepts of Self Psychology and the work of Joseph Pleck.*. I have to acknowledge my own bias here and yet I do believe that this contributes to a broader discussion of gender dynamics. I am also reminded of Gary zukov's book, "Seat of the Soul" and his formulation of "inauthentic power" or power over vs "authentic power" or power within. The support of "male as protector" is too close for (my) comfort to fundamentalist who postulate the legitimacy of males as alpha. I do think that many men do see themselves as "protector" and do experience stress when they can't succeed in this but to me this dynamic should be deconstructed (though not necessarily totally disregarded). There is a tension between doing couples work from a gender conforming versus A gender liberating perspective. Thanks for listening!

I would generally agree with this article Steven, however, there is a danger of "one size fits all" thinking in this hypothesis of protection. I speak of males who were emasculated in early life (usually by over-bearng, demanding mothers) and then find themselves exhibiting passive-aggressive behaviors after marriage. I worked with a couple that had this issue. The wife kept complaining that her husband didn't now how to "protect her honor"as she would often put it. He felt confused, frustrated and angry at her for demanding he follow his biological imperative and be protective of her, mostly from the inability she had getting along with his family members. I can't agree more with Ms. Walker's spin on this. As therapists, it is imperative we find ways to " translate one partner's needs into something that relates to a basic emotional need in the other". I think your closing comment still supports all we've said here, Steven... "...couples who begin to interact in this way become like two different instruments playing different notes to create something together that neither can do individually---relational harmony." Well said!

What is brilliant about this approach is that it opens therapy up to men and it also allows us therapists to ask that important question - "how does this work for you" and can we translate one partner's needs into something that relates to a basic emotional need in the other.