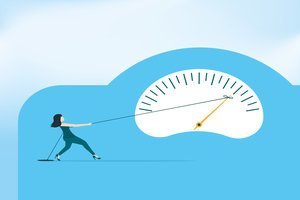 Every winter, the weight-loss frenzy begins anew as the overeating of the holiday season subsides and millions of us resolve that this will be the year that we will lose weight and keep it off. Dieting has become one of the great American pastimes, and no matter what our size, none of us is immune from the messages that we're too fat—or that we'd better start worrying about becoming too fat.

The $60-billion-per-year diet industry keeps offering new programs and plans. Low-fat, low-carbohydrate, and low-calorie diets get recycled with new names, claiming that they aren't a diet (since, as we all know by now, diets don't work!), but a way of life. Although the blame—and shame—for the failure is usually placed at the dieter's doorstep, strong physiological, psychological, social, and even economic forces make dieting a losing battle.

Clients struggling with compulsive or binge eating often seek therapy because they're aware that their overeating may have an emotional component. But the idea that people overeat to soothe or avoid painful emotions, while often true, is only part of the story. If we focus only on the emotional reasons for overeating, we neglect factors that cause the diet/binge cycle to take on a life of its own. In fact, the empirically demonstrated truth behind the pop truthiness of "diets don't work" is that dieting—intentional self-deprivation—sets in motion automatic physiological and psychological factors that actually trigger overeating. In fact, there's growing evidence that diets make us fat!

The most immediate reason that diets don't work over the long term is that they promote a loss of the internal signals for hunger and fullness that are necessary for normal eating. This was the finding of a classic study conducted by Janet Polivy and Peter Herman at the University of Toronto, published in 1999. In this experiment, a group of dieters and a group of nondieters were given the task of comparing ice cream flavors. Participants in each group were divided into three subgroups. Before getting the ice cream, the first subgroup was asked to drink two milkshakes, the second subgroup was asked to drink one milkshake, and the third subgroup wasn't given any milkshakes. Next, the researchers offered the groups three flavors of ice cream and asked the participants to rate the flavors, eating as much ice cream as they desired.

The researchers termed what had happened to the dieters "disinhibition," which occurs as a result of a "diet-mentality." The milkshake preload had a different effect on dieters than on nondieters. Nondieters, eating in an unrestrained and normal manner, tend to regulate their food consumption according to internal physical cues of hunger and satiety. Therefore, in the experiment, nondieters regulated the amount of ice cream they ate based on perceived fullness. What could be more obvious and natural?

The dieters, however, reacted in the opposite way—the more milkshakes they consumed, the more ice cream they ate. Why did they lose the capacity to regulate their intake? According to the researchers, this "counterregulation" occurs because a milkshake preload disinhibits a dieter's usually inhibited or restrained eating, almost like a switch: "I've blown it anyway, so I might as well keep eating before I go back on my diet." This is an almost irresistible incentive to go on eating well past physical fullness.

The pitfalls of diets have been known for decades. Not only does dieting make people fatter: it affects psychological health. In a classic study during the 1940s, researcher Ancel Keys studied 36 conscientious objectors to see what would happen if they were placed on a semistarvation diet for six months. The men were given nutritionally adequate food, with the same calories as most commercial weight-loss plans. The changes observed were dramatic. In addition to losing about 25 percent of their body weight, they experienced noticeable personality changes, becoming lethargic, irritable, depressed, and apathetic. They became obsessed with food, and they talked constantly about eating, hunger, and weight.

I consider myself to be weight neutral—meaning that I don't assume anything about people's physical and mental status based on weight, and I don't use weight as a measure of a person's success or failure, a framework now commonly known as Health at Every Size. Since health relates to much more than the number on the scale, factors such as a healthy relationship with food, physical activity, good sleep habits, and regular medical care are better indicators. I encourage clients to focus on the fitness, strength, and flexibility they develop through physical activity, as well as on the joy of movement. As my clients focus on sustainable behaviors, normalize their eating, and work on building a more positive body image, we view any weight loss as their body's making an adjustment, but not as the main event.

No matter where therapists find themselves on the continuum of size acceptance, it's our duty to become more aware of this issue and familiar with the research. By increasing awareness of our own behaviors in our professional and personal lives—negative comments about weight, fat jokes, talking about being "good" or "bad" in reference to eating behaviors—we can help change societal norms. If America is truly a melting pot, it's time to throw size diversity into the mix. If we're truly interested in the well-being of our larger clients, then we need to fight discrimination toward them, including our own. As Gandhi put it, "We must be the change we want to see in the world."

Judith Matz, LCSW, is the coauthor of Beyond a Shadow of a Diet and The Diet Survivor’s Handbook. She’s a speaker and trainer with a private practice.

This blog is excerpted from "Recipe for Life," by Judith Matz. The full version is available in the January/February 2011 issue, Diets and Our Demons: Does Anything Really Work?

I am pleased to know about this research and glad you a promoting it in your article. As a brain-function specialist, I've long believed that everything starts in the brain...and that whatever a person does that impacts the body has likely already impacted the brain. The only way I know of for the average person to get or keep weight within normal limits it to forget dieting (especially fad and fast and extremely low carbs--the brain needs healthier carbs for its support and for the nervous system) and live a balanced slow-and-steady longevity lifestyle.

This 'weight neutral' premise is an excellent launching point for a client interested in supporting healthy changes. Often, my clients begin with the goal of weight loss. What we discover through hypnotherapy is often that self nurturing and self care being enhanced provide powerful tools for desired changes. I love it when I watch a client progress through change of self image, and then creating a personalized self care protocol that brings joy, spontaneity, and optimum wellness into the forefront (weight loss is a side effect!!).

Digital age has completely transformed the way healthcare services are imparted. Now, you can use videoconferencing, emails and texting to receive quality healthcare solutions. So, it’s possible for a senior citizen suffering from a psychiatric illness such as trauma etc., to receive psychotherapy even if he is living in some remote rural location. If you have a smartphone, you can find qualified therapists through reputed online directory Therapytribe.com, specifically designed to find therapists globally.

This is very interesting. So how can I help my clients who want to lose weight? Is there more to suggest besides promoting the 'joy of movement'?