Four Strategies for Working with Vets

...And the One Question You Should Never Ask Them 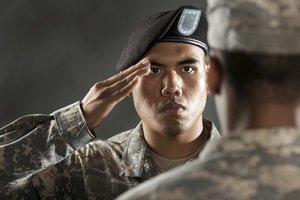 Many coalition troops in Afghanistan and Iraq have spent years alternating between trying to kill and trying not to be killed. Think back to what you were doing several years ago, and what you've done since then. Now imagine spending every one of those 2,629,800 minutes wondering whether it was going to be your last.

For more than 5,500 American combat personnel, it was. The 33,000 Americans wounded in action probably thought it was. The rest of the 1.9 million who've been deployed have wondered when it would be.

Comprehending the enormity of this life experience is a challenge. A recent study in the American Journal of Psychiatry reports that 58 percent of the men and women in active duty were exposed to dead bodies or body parts; 72 percent were assaulted or ambushed; 73 percent witnessed or experienced an accident causing serious injury or death; 79 percent know someone personally who was seriously wounded or killed; 81 percent came under fire.

No one knows what this much exposure over that much time does to developing bodies and minds, how it modifies a young person's identity and outlook, but no one thinks the long-term effects are inconsequential.

Not everyone comes home with PTSD as a result of incidents such as these. Estimates of how many combat veterans are exhibiting symptoms varies from study to study, but it hovers fairly consistently at about 20 percent. These estimates are snapshots of the current situation; in no way do they give us an accurate sense of what lies ahead. There is, after all, a reason it's called post-traumatic stress: measurable symptoms can lie dormant for decades, only to emerge with lethal ferocity.

Despite good intentions and a desire to ease suffering, civilian therapists working with combat veterans face several challenges. To start with, there's the challenge of engaging combat veterans in counseling of any kind, especially in-depth therapy. They resist making the decision to set up an appointment with a mental health provider, have difficulty keeping the appointment, and struggle with tolerating more than one session. Civilian therapists across the country have found it tough to engage military clients; they complain of an extremely high no-show rate. So the best-practice approach is to start with the assumption that the first session may afford your only opportunity to ease the suffering of the veterans you encounter, and therefore you have to make every interaction with them count.

Once combat veterans are actually in your office, plan for the following points during your time with them:

Expect angry reactions. Intense anger is a predictable side effect of having been "down range." It's often the reason combat veterans seek care. One reason for this is that of the three self-preserving responses hardwired into the human brain (fight, flight, freeze), combat training is all about habituating "fight" as the automatic response to any threat, and eliminating the "flight" and "freeze" responses. Once that's ingrained, every perceived threat, regardless of context, is likely to be met with the anger that encourages the fight response—which can create a host of problems in civilian life.

In assessing these clients, help them identify the ways in which their anger is compromising them in civilian life or detracting from their quality of life (frightening their children, hurting their spouse, alienating friends, decreasing commanders' trust, affecting their job security), not protecting them as it did in combat. This is an opportunity to help them regain emotional control.

Focus on emotional pain. Assess how much emotional pain your military clients are experiencing at the beginning of the session, perhaps by using a 0-10 scale. It helps them acknowledge how much pain they're really in—something they avoid doing. At the end of the session, ask that they again attach a numerical value to their emotional pain level. This helps them acknowledge that they can feel better, instilling hope, and that the things you did together in the session worked—which has the additional bonus of increasing their trust in you and in the therapeutic process.

Ask what losses they suffered. Unrecognized, and hence unresolved, grief is a huge component of soldiers' pain. Emphasize the importance of "honoring the fallen and their sacrifices"—that every fallen soldier deserves to be wept over and missed by his brothers and sisters in arms. Explain that their grief may be part of what's making them feel so bad so much of the time.

Create action plans. As I alluded to earlier, talking doesn't feel like action to most veterans, so having a plan to carry out between sessions is both functionally helpful and emotionally soothing. Start your sessions by assessing their current problems and then helping them create a plan that'll move toward relieving their symptoms. Ask them what the single most disturbing or bothersome symptom is, and work on that. Reducing their emotional pain and instilling a sense of hope requires active, ongoing assessment of symptoms and in-office interventions during each session. Before they leave a session, write down the specific, customized plan the two of you have developed that addresses their issues in concrete terms.

Never ask a combat veteran, "Did you kill anyone?" This is an incredibly intimate question, the answer to which a civilian will never truly understand, because the context of war is unique. Every single combat veteran to whom I've spoken has been asked this question at some point, and they've all told me it either angered or upset them. If they offer the information, recognize the sacredness of the trust they're sharing, but don't press them for details.

This blog is excerpted from "The Rules of Engagement" by Alison Lighthall. The full version is available in the November/December 2010 issue, The Wounds of War: Returning Vets are Challenging Us to Rethink Our Approaches to PTSD.