Here's Why Your Kids Won't Listen to You

The Old Rules of Family Togetherness No Longer Apply 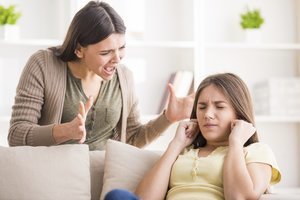 When I was growing up, dinner was at 6:30 p.m. sharp every night, timed to my father's arrival home from work. The menu was entirely predictable according to the day of the week. There were no substitutions, just one meal for the whole family. And, of course, it wouldn't be considered a real meal without some sort of artery-clogging meat as its centerpiece.

With so many contending schedules and dietary demands, is there such a thing as a family mealtime anymore? Even when family members are seated at the same table, everyone may be consuming something different—take-out Chinese, microwaved frozen pizza, salad with low-cal dressing—often in separate worlds. Fourteen-year-old Jenny is texting under the table while apparently answering Mom's question about a homework assignment. Ten-year-old Bart casually asks for someone to "pass him the fucking salt." Sixteen-year-old Adelaide warns her siblings and her mom to "stay out of my way, because I'm PMS-ing real bad."

What's happening here? Compared to the still-life portrait of family dinners of decades ago, this is everyday life as abstract expressionism—a free-form swirl of crisscrossing currents and tangents. Are families like this one chaotic and out of control? Or is this a picture of liberating spontaneity and refreshing openness? Whatever judgment you may make, the question remains: what's happened over the past 20 years that seems to have changed things so completely?

Today's kids and their families are light-years removed from the neighborhoods and towns of the "greatest generation" parents and their kids of yore, who butted heads over formalistic ritual and order and struggled intensely over hierarchical control. Like countless therapists, I've seen plenty of kids over the last couple of decades who appear to have been thoroughly hijacked by pop culture. They're disconnected from their parents and lack all bounds or rules—even to rebel against. It almost goes without saying that they often treat their parents like dimwitted servants, whose only useful function is to provide food, clothing, housing, and money.

But delve beneath the surface and you soon encounter surprising paradoxes. It's true that lots of behavior in kids once considered outrageous by most adults and pathological by therapists has become the norm: it isn't just some kids from some poorly structured families who are like that, but most kids, to one degree or another. Yet these "impossible" kids are often remarkably smart, confident, knowledgeable, competent, more involved with ethical and social issues than my generation ever was, and almost always capable of stunning kindness and generosity.

To be a parent today is to be regularly confused, dismayed, anxious, shocked, and furious, but also astonished, fascinated, entertained, impressed, and proud—sometimes in rapid succession. Trying to get it right while adrift in a sea of conflicting child-rearing fads, parents often hear that they're doing everything wrong, but even the criticisms are contradictory. They're faulted for being pressuring, wimpy, managerial, undercontrolling, and overcontrolling. They're accused of being helicopter parents, yet uninvolved—both pathology hunters and self-centered narcissists.

Chances are that the families you're sitting with in your practice are post-boomer families---parents and children who've experienced variations of key social changes: the growth of suburbia and exurbia, widespread divorce and blended families, the ubiquity of mothers in the workforce, continual geographic relocation, overscheduled lives, technology, globalization. Shaped by this shared experience, parents and children in the post-boomer era are more alike than different. Despite the hair-raising chaos that we see in our offices, these generations have life narratives closer than any other generational dyad we've treated since World War II. Post-boomers and their kids are, to a remarkable degree, kindred spirits, mostly unaffected by the "generation gap" that was the buzzword of the '60s and '70s.

How can we move beyond random success to identify some well-anchored and dependable clinical principles of working when old styles don't cut it with 21st-century families? Thanks to a powerful convergence of post-boomer findings on temperament, child development, and learning processes, along with a growing literature on successful parenting practices, we know far more than we used to about what kids and parents need so they can change in ways that dovetail with the realities of contemporary family life. To illustrate, let's focus on how two traditional bulwarks of family functioning—hierarchy and communication—can be redefined for 21st-century families.

Since therapy is really about learning to change, the first tool I now use in helping create a workable, 21st-century kind of hierarchy is figuring out what I call a child's "learning-temperament." This is an amalgam of the widely known work on learning style (e.g., auditory, visual, tactile, active, concrete, and inferential learners, etc.), with an emphasis on the more recent interest in constitutional temperament (e.g., sensory integration, tenacity, activity level, first-time reactions, basic mood, adaptability, separation sensitivity, etc.). Learning-temperament is a formidable force. As most veteran parents and researchers report, it's apparent from the first years of life and doesn't change much with age.

Understanding how a child constitutionally metabolizes information creates in parents (and therapists) a respect and patience for how deeply ingrained a child's responses to adult teaching are. The effective use of this understanding increases parental authority and the chance that parents and therapists will get through—that a message will stick to those walls.

While most post-boomer parents have heard about attention and learning style, few are familiar with what I call "conversational style," a notion I picked up while listening to speech pathologists and veteran parents describe communication patterns. Some kids open up in the morning, some right after school, and others at bedtime. Conversational style means that each child responds to a different tone and pacing from a parent; each has a different level of comfort with back-and-forth dialogue, questions, and phrasing. These differences are apparent from the first years of life and remain relatively constant through adolescence and well beyond. Through thousands of family sessions and "stories from home" (brief "I said—they said" notes that parents read to me about dialogues around the house), I've realized that therapists and parents need to take these characteristics into account and respond in a fashion that complements a child's conversational style. Given the peer group, the pop culture, and self-regulating videogames, kids are used to nothing less.

Childhood and family life became chaotically unbound in the late 20th and early 21st century, and therapists feel the repercussions of that every day in the consulting room, often uncomfortably. But we must try not to be afraid of kids who know no bounds and are often contemptuous of their uncertain mothers and fathers. We must let post-boomer parents and their children, fellow-travelers that they are, teach us where we need to go.

Today's family members want to be known to each other, even teens and their parents! They're asking us to help them move toward their shared humanity—together. It's an intensely challenging mission, especially for therapists raised on ideas conceived in boomer times, and it's ultimately hopeful.

Things have changed. This is the post-boomer era. And these are not your parents' children.

This blog is excerpted from "Vertically Challenged" by Ron Taffel. The full version is available in the September/October 2009 issue, Parenting in the Age of Whatever: Paradoxes of the Post-Boomer Family.

There are so many assumptions in this article: that your readers are Boomers; that Boomers were better parents than "post-Boomers;" that "post-Boomers" are responsible for the "disintegration" of family life. As a Millennial therapist who was raised chaotically by narcissistic Boomers, this does not resonate with my personal experience, nor with my experience as a therapist. It is worth noting that Boomers, not Gen X or Millennials (what most of us would call the post-Boomer generations) divorced in record numbers, and that it is actually their Millennial children who experienced the fallout of divorce firsthand who are staying married and trying to establish more cohesive families than those they were raised in. My Boomer mother took off on a quest of self-discovery and never returned, while my Boomer father left us to fend for ourselves with no babysitters, regularly cursed at us, fed us fast food for dinner every night, and set no boundaries whatsoever. In my home, by contrast, we eat a home-cooked family meal at 6 pm every night and my children are in bed by 7:30. This is true of my siblings as well, as we all craved more structure than we were raised with, and it is true of my Millennial friends who are raising children. I can only imagine that your clients pick up on your thinly-veiled judgment and condescension. Check your assumption that Boomers were somehow a superior generation, when they were responsible for unprecedented rates of divorce, and were the first to tear up the rule book that the Greatest generation used when raising them.

I appreciate this article for addressing what I am, indeed, seeing in my office and also in my life in terms of a heirarchical switcheroo between parents and adults and the complexity of this young generation. I would like to know how I could learn about "learning tempermant."