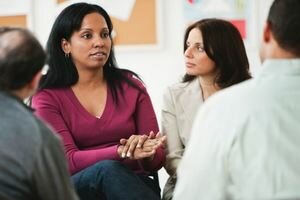 It was on a night 20 years ago when I had an experience that transformed the way I work with parents today. Up to that point, I’d practiced the traditional approaches that most therapists use with parents—individual therapy, couples therapy, child-focused parent guidance, and family therapy. That night, after running a child-focused parent group, I was walking toward my car in the parking lot when I ran into three of the parents from the group who were still talking over what we’d been discussing in our meeting. “There’s an extra charge for parking-lot sessions,” I wisecracked as I walked past them. “This is our session, not yours,” shot back one of the parents, playfully, but also with a trace of seriousness. “And there’s no charge!”

Driving home, I found myself coming back to that comment and realizing that it spoke to what I was just beginning to admit to myself was missing in the parent group I was leading. These parents have so much more understanding and wisdom to offer each other than this group is tapping into. They don’t need therapy as much as they need each other. What they needed was the opportunity, encouragement, and tools to co-create their own support community—one that, once it got going, could sustain itself without a therapist to run things.

An Introduction to the ParentCircle

Those were some of the initial musings that led over time to the development of the ParentCircle: Pathways Model, which engenders small parenting communities offering an experience that traditional therapy cannot. So what do ParentCircles look like? To get a picture, imagine yourself sitting in an introductory informational meeting held at a local church. At these meetings, I introduce myself, talk a little about my own clinical experience, and then describe what it means to become an integral part of a group of parents who meet twice monthly to offer an experience of community to other parents going through the same, and different, challenges. My role, I explain, is to provide useful information about parenting and offer guidance and training in basic group processes that’ll enable the group itself to provide the support, insight, and accrued wisdom that only other parents can offer.

After welcoming everyone and guiding them through a brief breathing exercise and a few minutes of silence, I sounded a soft bell and asked them to move to the circle of chairs. They then did private journaling for 10 minutes, after which the agenda go-round began. During the go-round, each parent briefly shared his or her “high and/or low point” that week as a parent.

When it was Dick’s turn to share, he said: “I’m here...and I really want to see if I can get what I need out of this program. I’m just backed up with stuff. Everything is frustrating. I’m running on empty...I need to figure out what to do when Timmy ignores me on purpose. I’m getting really pissed—really quick—with him. I don’t want to lose my temper again.”

I started our work together with one of the most important features: helping a parent articulate specifically what he or she wants from the work that day. I asked him, “What would you like to have happen today in the circle?”

Dick answered, “I want to figure out why I am so miserable and cranky. Nothing is really helping,” he added, starting to tear up.

I then asked, “For today, does it fit better for you to do a piece of work designed to help you get it all out and off your chest, or do you want to work at understanding why all this is going on?”

“I think I just want to get stuff off my chest,” he said. “I haven’t really talked to anybody about all this for weeks. I don’t want to explode.”

Once we had a clear focus for the work—“getting it off his chest”—we could begin a process to accomplish that. I asked him to express the frustrations and burdens he was holding, one at a time. Then, anyone from the group was invited to respond by “mirroring” back to him what they’d heard—“You’re saying...”—and then inquiring, “Is this right?” If the person doing the mirroring got it right, Dick was just to say, “Thank you,” and move on to the next person.

This basic mirroring technique would allow Dick to experience “being seen” by various group members. By having different members take turns mirroring, a container would begin to form. At the same time, Dick would receive “attunement,” as group members began practicing listening while containing their own responses.

As I witnessed this simple, seemingly artificial, technique unfold, I found myself thinking: This is powerful for these parents because they’re all working together. They’re joining in an act of giving. It’s energetic and already powerful. They can already sense the potential that exists in the circle, for themselves and the other parents. Dick is feeling ‘seen.’... He doesn’t have to worry about others’ reactions.... He’s getting ‘things off his chest’...but is also being filled up by that mysterious elixir of others’ interest and concern for him.

There’s a deep and urgent need for parents to have a “place of their own.” A space where they can learn about themselves and their children, get active support to take the high road, and—slowly, over time—be reminded of their basic goodness and natural connection with others. We must help parents learn how to create a safe, energetic holding environment for their self-as-parent as they move, at their own pace, toward genuine and essential wholeness. In this holding environment, each parent can reclaim his or her core energy—a felt sense of mattering—so that this essential “energy of mattering” can be organically passed on to the next generation.

David Flohr, PhD, is the developer of the Self-as-Parent: Pathways Model, a comprehensive group-based approach to the self-development of the parent, of which the ParentCircle is a central component.

This blog is excerpted from "The Parent Circle" by David Flohr. The full version is available in the January/February 2012 issue, Are Parents Obsolete?: Confronting the Dilemmas of 21st Century Childrearing