Mindfulness and Awareness According to Jon Kabat-Zinn

The Father of MBSR Reflects on Mindfulness Today 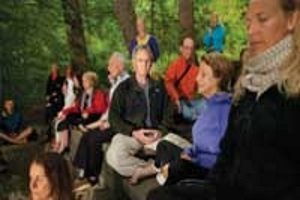 On the 10th anniversary of the publication of Coming to Our Senses: Healing Ourselves and the World, Jon Kabat-Zinn will be the keynote speaker at the 2015 Networker Symposium this March in Washington, DC. He’ll explore the connection between the intensely private experience of living a meditative life and responding to the vast deluge of global and social problems we collectively face. In this interview, he explains the concept of mindfulness, how to practice it, and its role in the world today.

When something achieves the kind of cultural currency mindfulness has reached, the definition often becomes a bit blurry. What’s the difference between mindfulness and self-hypnosis?

Kabat-Zinn: Mindfulness is often compared to lots of other things with sexier names, but I think to call it just another form of self-hypnosis is just utter nonsense. To be sure, mindfulness isn’t something that just got invented, certainly not by me. It goes back thousands of years in virtually all cultural traditions. But for me, the most precise articulation is in the Buddhist tradition and the development of practices to cultivate wakefulness, kindness, and compassion.

It’s hard to actually describe what mindfulness is and, of course, there are plenty of different definitions of it. Early on, I realized that it’s just a can of worms to try to give mindfulness a precise definition. I prefer to approach it not as a concept, but as an experience, a way of being, a doorway into oneself.

Back in 1979, when I started Mindfulness-Based Stress Reduction, I came up with an operational definition of mindfulness that still serves as well as anything else: mindfulness is the awareness that arises from paying attention on purpose in the present moment nonjudgmentally. That doesn’t mean you won’t have any judgments. In fact, when we start paying attention, we realize that we almost have nothing but judgments going through our heads. Mindfulness is about getting access to our own awareness with equanimity and without falling into a stream of conceptual thinking that goes on and on and on.

The challenge is actually just experiencing one breath in and one breath out. And that means not thinking about the breath or patting ourselves on the back for how wonderfully we breathe or anything like that. It’s just the direct knowing of breathing. But breathing is just the object of attention. Mindfulness isn’t about the object: what it’s really about is the attending itself.

Since this interview is intended for an audience of therapists and we’ve been talking about the importance of relationship in mindfulness, might I ask you how this experience of our back-and-forth is shifting your awareness in this moment?

Kabat-Zinn: I’m hearing your questions and, as with any human being, there’s a tendency to filter. So I’m probably hearing what I want to hear, rather than the whole of what you’re communicating to me. It seems you’re trying to draw me out on certain subjects that you’d like to have in the magazine, and you’re holding what I’m saying in awareness and probably going through some kind of fine-tuning yourself, such as, “How long can this guy talk about these things? How do I get in there to redirect the conversation?”

What keen therapeutic intuition you have!

Kabat-Zinn: We’re engaged in a complex, nonlinear relationality. It’s a dance, so to speak, and there are a lot of different elements to it. As with any human communication, when we’re truly attending to the whole, rather than just the points we want to get across, we can actually begin to dialogue in a way that brings forth something that might not have been apparent before. What mindfulness does is reveal aspects of the experience that we haven’t been aware of because we’re too busy zoning out on autopilot.

When you talk about mindfulness, for me it sounds like both the most natural thing in the world and one of the hardest things to achieve.

Kabat-Zinn: I want to emphasize that we’re not trying create another New Age movement, with the idea that somehow people who meditate are special or have a deeper insight than everybody else. There’s a hubris to that kind of attitude that’s ultimately ignorant, not only of our own process, but also that of others. And it doesn’t mean that there aren’t institutions and people in this world that are causing enormous amounts of harm, but all that harm is coming out of the human mind when it doesn’t know itself.

The message of mindfulness is an invitation to everybody to wake up to the true dimensionality of who we all are, and to move in a direction of maximizing the good that comes from our activities and minimizing the harm both to ourselves and others. And that could be done on a corporate level, on a national level, on an international level.

I think the reason we’re seeing so much interest now in mindfulness is that, as a species, we’re starving for authentic experience. But the impulse is to make mindfulness into a kind of catechism, in which some inner circle understands what mindfulness really is and everybody else is deluded. Instead, I think of mindfulness as a big umbrella. The difference between various traditions are unimportant as long as the focus is on creating greater well-being and minimizing harm.

This blog is excerpted from “Staying in the Moment with Jon Kabat-Zinn.” The full version is available in the Jan/Feb 2015 issue. To subscribe, click here. >>