Children are a blessing, a delight, a wonder. They're also a minor cataclysm. These cherished intruders fill us with a profound sense of vulnerability and lack of control. We dread the thought of something terrible happening to them or worse yet, of losing them. They hold us hostage to constant anxiety. We love them so much, and want to protect them at all costs.

Before Jake was born, Stephanie worked as an office manager in an international shipping firm. She had always planned on returning to work after her maternity leave, but Jake's birth changed that. She couldn't bear the thought of leaving him and, after doing the math, realized that most of her paycheck would go to the babysitter anyway. Five years have passed and Sophia has come along. "With a five year old and a two year old, I'm on mother duty 24/7. If I have any time left, I just want it for myself. When Warren approaches me it feels like one more person wanting something from me. I know that's not his intention, but it's how I feel. I don't have anything left to give."

"When did sexual intimacy become his need only? Do you miss the connection, too?" I ask her.

She shrugs. "Not really. I keep thinking that it will come back, but I can't say I miss it."

While Stephanie's desire has remained stagnant, Warren's frustration has risen exponentially. "I've tried everything," he tells me. "She asks for help, I give her help. I do the dishes, I let her sleep late on the weekends, I take the kids out so she can have some time to herself. But, you know, I work, too. I'm meeting deadlines all day long. It's not like I'm having a picnic. She thinks all I want is to get laid, but that's not it. I want to come home and be with my wife sometimes. But all I get is a woman who's become all mother."

"Have you seen the movie Before Sunset?" I ask him. "At one point the main character, Jesse, says that he feels like he's running a daycare with someone he used to date." 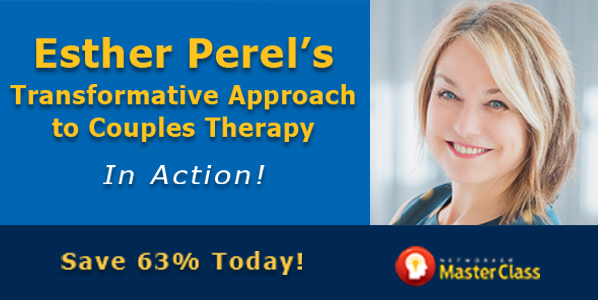 In the physicality between mother and child lies a multitude of sensuous experiences. We caress their silky skin, we kiss, we cradle, we rock. We nibble their toes, they touch our faces, we lick their fingers, let them bite us when they're teething. This blissful fusion bears a striking resemblance to the physical connection between lovers. In fact, when Stephanie describes the early rapture of her relationship with Warren—lingering gazes, weekends in bed, baby talk, toe-nibbling—the echoes are unmistakable. When she says, "At the end of the day, I have nothing left to give," I believe her. But I also have come to believe that, at the end of the day, there may be nothing more she needs.

This is an excerpt. Click here to read the full version of this article...

The full version of this article is available in the September/October 2006 issue, Couples Adrift: What Science is Telling Us About Helping Troubled Relationships.

Tuesday, February 17, 2015 5:01:51 AM | posted by Psychotherapy Networker » How to Keep Sex in Marriage After Childbirth