A New Revolution Teaches Us About Women’s Psychological Fortitude 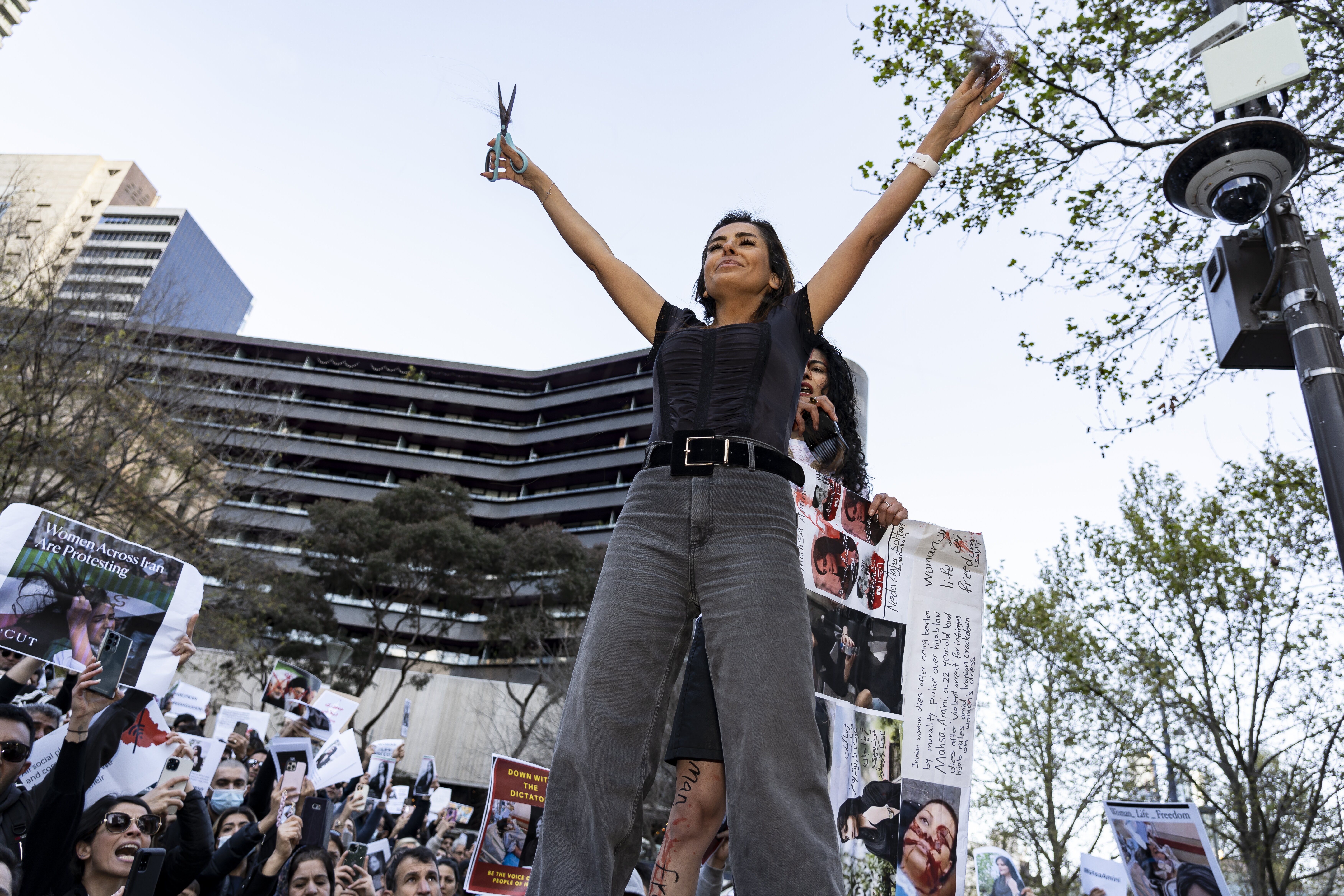 As an Iranian child, my earliest memories were of the Islamic Revolution transforming my country. I was three when the Islamic Republic overthrew the Shah, and the Iran-Iraq War began. As the war grew more intense, and new laws turned Iran into a dictatorship, every aspect of our lives as once-free citizens was suddenly under government control.

Women’s autonomy was completely dismantled back then, and Iran remains in a state of gender apartheid to this day. Iranian women are forced to wear hijabs, even if they’re not Muslim. If they don’t conform, they risk jail time and 73 lashes. Being jailed is especially frightening for Iranian women since their testimony in court is now worth half as much as a man’s. Women cannot travel without the permission of a husband or father or brother; they need a male guardian’s consent to marry; and if they divorce, the custody of any children automatically goes to the father or the father’s family members. Women who’ve been raped but cannot prove it in the courts can be charged with adultery: the country’s highest capital crime.

The oppression we faced, in the midst of the 8-year Iran-Iraq war that followed the Islamic revolution, was difficult for my family to tolerate. In the mid-1980s, when I was 10, we fled the new regime’s many injustices and immigrated to the US with just two suitcases and our hope of better opportunities and freedom. All of us struggled for years to acculturate. Our language was different, and not only did we have no community or extended family, many in our new home assumed we were terrorists ourselves, not a family running from them.

Eventually, my brother and I assimilated by pretending we weren’t immigrants, perfecting our English so there was no trace of an accent, and pushing away those parts of our culture—food, music, even friendships—that once defined us. We worked hard to look and sound like any other American, so we wouldn’t be asked, “where are you from?” But the aching pain of what had become of our motherland and who we had once been, never left us.

It’s been 43 years and today, my family, along with the entire world, is witnessing a tipping point for the Islamic Republic of Iran. A new revolution is taking on this brutally repressive government and mounting a courageous fight for freedom. We’re all now seeing the headline-making images of women daring to stand strong in public spaces without their mandatory hijabs; chanting, “Woman, Life, Freedom! Down with the dictator! Down with the Islamic Republic!”

These are both dark and hopeful days for the entire nation of Iran and the watching world, as Iranians at home and throughout the diaspora unite against the regime’s brutality. We’re seeing reports of over 30,000 detainees, many of whom are being beaten and tortured. There’ve been countless killings of protestors. The average age of those arrested, according to the regime, is 15. And yet, we continue to see awe-inspiring examples of what courage really means. Ever since Mahsa Amini , a 22-year-old Iranian woman was brutally beaten and killed by the Iranian government’s morality police for not wearing her hijab (headscarf) properly, there have been mass demonstrations, rallies and protests against the Iranian Islamic Regime in countless cities and provinces in Iran, as well as major cities and countries worldwide. Amini’s killing has resulted in a full-blown revolution led by Iranian women, who’ve made it clear that they’re no longer going to tolerate the oppression they’ve lived through for the past 43 years.

The young women of Generation Z, the largest age demographic in Iran, are courageously leading this uprising. As they remove their headscarves and show their willingness to die for their freedom their protests are capturing the attention of the world and inspiring every age group, ethnicity, religion, and socioeconomic group in the country. With one voice, people on the streets are chanting, “Zan, Zendegi, Azadi,” which loosely translates to “Women, Life, Freedom,” and also: “we have nothing to lose.”

As the American broadcaster Dan Rather recently said, “Iranian women are fighting for the most basic of human rights: the right to be themselves. In this fight, they are of course not alone. Around the globe, societies that differ in such matters as religion, race, ethnicity, or even form of government often have one thing in common – women have fewer rights then their male counterparts. Their work is less valued, their autonomy questioned, their voices silenced. Most, if at not all, present-day societies have been constructed by men to further domination by men. This dynamic is fundamentally incompatible with a truly just and equitable society, no matter how soaring the rhetoric of one’s constitution.”

The Effects on Therapy Clients

The systems impacting the current situation in Iran also impact members of the Iranian diaspora, including me. I can tell you that to me it feels like experiencing extreme grief and celebration at the same time. Your female clients from different backgrounds and life experiences may also experience some of the same triggers without always seeing that how what they are currently feeling is related to these global events. This is something you may want to listen for and explore with clients from any background if they begin to express changes in mood or how they feel about themselves and the world they live in.

For all culturally-informed therapists dedicated to systemic practices and social justice, the current situation in Iran is a valuable opportunity to understand how larger systems impact individuals and families. Not only that, it’s a chance to dig deep in consultation and supervision to strengthen and incorporate integrative, systemic conceptualization in practice.

If you’re working with Iranian diaspora clients, consider adopting a comprehensive, integrative, and multi-level systemic approach and tailor your interventions to fit the current political climate, while recognizing that the earlier climate altered their lives and forced adaptation to great adversity. Remember that with an Iranian diasporic population right now, the impact of what we’re seeing in the news and hearing from home is widespread; and it’s shared among us through endless stories of oppression and loss.

Beyond the therapist’s choice of theoretical approaches, there are two additional questions to consider when working with the Iranian diaspora right now: Am I sufficiently trained and supported in how to accompany a family on their journey of addressing the complex constraints that derive from the diaspora? And, have I addressed (and do I have a continued practice of addressing) my own implicit biases that emerge on this journey with my clients?

One thing that we as therapists have all witnessed in the past several years of the pandemic is that global events are part of a chain that impacts all of us, whether directly or indirectly. If these events are ignored by our profession, we miss opportunities to fully understand the impact of systems on one another.

This historic moment that we are witnessing in Iran is a great example of how that country’s longstanding patterns and chronic problems with gender, are interlocked with other systems, including culture and spirituality. And all of those systems are in play with the revolution that we are seeing today.

As we meet with impacted clients, we can begin to ask ourselves:

What do I actually know about the Iranian people and the diaspora?

How much of my own explicit and implicit bias am I willing to explore in order to work with this population?

If I do consider myself a feminist, in favor of therapists being socially responsible to uphold values about social justice for all, what are my fears standing in the way of solidarity with this population during this particular time in history?

Especially in the U.S., clients who are part of the Iranian diaspora may have learned that it isn’t always emotionally or even physically safe to acculturate and celebrate a newly merged identity that encompasses their culture of origin and the culture of the host nation. And unfortunately, many members of our field aren’t equipped with the guidelines, research, and teachings that could help them understand the experience of those who don’t feel the safety to acculturate, or may’ve grown distant from the children they’ve encouraged to assimilate into the new host culture and who’ve lost their original cultural identity.

As we pay attention to Iran right now, it’s a good time for the field to ask itself, how does our current translational sciences literature address such issues about what becomes of an immigrant individual or a family’s identity if assimilation is the only safe solution, and transgenerational legacies, and the immigration story, is burdened with painful wounds that cannot be reopened?

These questions are relevant to the stories of many Iranians in diaspora for whom the recent weeks in Iran may have been hopeful and challenging. They may have experienced glimpses of light along with feelings of helplessness and re-traumatization tied to their own story of migration.

This first global feminist led revolution to end oppression of women in a theocratic dictatorship comes with a great deal of emotional baggage. Along with it, Iranians I’m talking to are experiencing the polarity of different forces within them; a heightened state of grief and hope, despair and joy, along with a rage that is fueling bursts of adrenalin which, as we’re seeing, can move mountains.

Therapists will find that compassion and exhaustion, and love and aversion are all existing within the body of the Iranian diaspora as they continue their daily attempts to demonstrate assimilation and gratitude to their host nations for their lives today. They may also be shedding tears of sadness and dismay.

I do think it’s important to emphasize that the trauma that is being experienced by Iranians worldwide these days—whether they are participants in the in the daily brutal protests facing massacre in Iran, or witnessing the events taking place from afar—is essentially different from the trauma they have endured in the past. Attached to it is a feeling that this revolt is raising their level of dignity, bravery, integrity, and respect. It’s shifting them from a state of psychological submission to empowerment and differentiation.

Although this results in new wounds and trauma, in the end, we’re holding the hope and belief that we, as Iranians of today, are giving birth to the society that we want to have, where gender equality is the pillar of the society and the freedom to live and respect our differences is a virtue. This is why we are willing to give up everything—including our lives.

We understand that this feminist revolution to change the regime and its constitution in Iran will be a source of global pride and documented in world history, and for that, I believe, we’ll continue to see so many Iranians in our home country and throughout the world give lots of love and energy to the efforts of today.

May there be peace and equality for the women of Iran and the women of the world who continue to fight against oppression and injustice with their lives.

(For more information on the current situation, look for the social media hashtag #MahsaAmini on most platforms.)

Bahareh Sahebi, PsyD, LMFT, is assistant professor of psychology at Northwestern University, and assistant program director of the university’s marriage and family therapy program. Recipient of numerous teaching and practice awards, she’s also an AAMFT approved supervisor, and coauthor of Integrative Systemic Therapy in Practice: A Clinician’s Handbook. Click on her story, Through the Eyes of a Child, about growing up in Iran during the Revolution of the Islamic Republic.