The Power of Humor

Five Ways Therapists Put This “Best Medicine” to Use 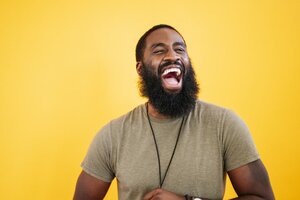 Quandary: I've noticed that sometimes the tone in my sessions feels serious, and I'd like to introduce a little more levity, where appropriate. What's a playful joke you've told in session or a moment of humor you've created?

I’ve always admired people who are quick-witted and can easily come up with playful puns, perhaps because I don’t believe this to be one of my natural talents. But since therapy can be serious and heavy, I’m often on the lookout for ways to weave in small sparks of joy and diversion. With some clients, this might take the form of poking fun at myself, like referencing my own journey as a “recovering perfectionist.” Or I might tell a client about a funny mistake I happened to make recently, like the time I wore two different types of shoes to work or left a cup of coffee on the roof of my car.

For other clients, I’ve found it more helpful to listen carefully for moments when they used humor to get through a difficult situation. It’s a way to highlight the positive where it doesn’t appear to exist.

One of the more unconventional ways I’ve lightened up moments of darkness is by throwing a stuffed poop emoji pillow at clients. I first did this several years ago with a client who’d routinely make sweeping negative generalizations about herself. She’d say things like, “I have no strengths” and “I’ll never learn how to do this new job.”

I’d recently added the stuffed poop emoji to my drawer of therapeutic knickknacks after my daughter won it at a state fair but had no interest in keeping it. I wasn’t sure how I’d use it either. But when this client began to list off a litany of perceived faults, I instinctively threw the pillow into her lap, hoping to alert her to what she was doing in a gentle, meaningful way. She was confused at first, but then laughed and immediately got the meaning.

Since then, this has become my shorthand method of calling out clients when they begin down the path of self-deprecation. It almost always breaks the spell of negativity—at least for a few moments. Although it’s not appropriate for all clients (and not quite as effective in Zoom sessions), the success of this silly intervention has taught me to be on the lookout for more ways to get out of our heads and into some light-hearted engagement.

As a marriage and family therapist, I find humor, when appropriate, helps couples with joining. It’s one of our most helpful relaxation techniques. Laughter can lower blood pressure, boost our immune system, elevate our mood, and reduce stress, fear, and anxiety. Laughing together can help form a bond between two people.

In one particular session with a husband and wife who had a habit of not talking to each other for prolonged periods after arguments, I decided to share the following joke:

A man and his wife were having problems at home and decided to give each other the silent treatment. Midway through the standoff, the man remembered he had an important meeting the next day. He had an early-morning flight and needed his wife to wake him up at 5 a.m., sharp. But not wanting to be the first one to break the silence and “lose” the standoff, he came up with what he thought was a brilliant plan. He wrote "Please wake me up at 5 a.m.” on a piece of piece of paper and left it where he knew his wife would find it. Then he went to bed, confident that he’d found a way around the whole thing.

The next morning, the man woke up, only to discover that it was 9 a.m. and he’d missed his flight. Furious, he jumped out of bed, ready to find out why his wife hadn’t woken him up as he’d asked. Then, his eye caught a piece of paper on the bedside table. The color drained from his face when he saw it. “It’s 5 a.m.,” the note read. “Wake up.”

My clients couldn't stop laughing, and the experience helped them change their thought process about giving each other the silent treatment. Maya Angelou once said, “My mission in life is not merely to survive, but to thrive; and to do so with some passion, some compassion, some humor, and some style.” Words to live by.

There’s a funny story I share with clients who second-guess themselves or have a lot of self-judgment.

A few years ago, I went to the gym for the first time in months. I walked over to the bench press machine and slapped a 10-pound weight plate on each side of the bar. As I lifted it off the rack, the bar came crashing down onto my chest. I’d forgotten that the bar alone weighs 45 pounds! With no spotter, I knew I’d need to get it off myself. So, slowly, I rolled it down the front of my body. One of the weight plates fell onto the floor, making a huge crash. Suddenly, everyone in the gym was watching me. Then, the other weight plate fell off because the bar was imbalanced. Bang! By this point, I felt like an idiot.

I could’ve gotten even more caught up in what the other gym-goers thought of me, but instead I shook my head and laughed it off. I put the plates away and walked to a more secluded area where I could regain my composure and continue working out. Instead of leaving the gym feeling like an embarrassment, I decided to laugh at myself and bring some humility into the equation. What my mind had wanted to say in the moment was that I could never go back to the bench press because I’d been so stupid. But I caught myself, and told myself that the other gym-goers looking at me had probably been in a situation like this at some point too—that this was a part of learning.

It can be hard to fight negative thoughts and feelings that come up, but when we’re able to laugh at ourselves and realize that others have been there too, it’s easier. Sometimes when we think others are judging us, they’re actually thinking, I’ve been there. You’ve got this.

I finish this story by asking my clients whether they’d think I was an idiot if they were at the gym and saw me struggling. They usually say no, that they’d feel for me. I’ve found it really helps them put things in perspective.

Keeping the Elephants Away

I tell this joke to my clients because it shows how our irrational beliefs can appear to make sense, without me having to get didactic to convey the point.

I’ve come up with my own ending to this story, which I also share with clients: “I can help you with these problems,” the therapist assures the client. “How so?” the client asks. “Stop snapping your fingers,” the therapist replies. The man stops, and his anxiety is visible as he shoots frequent glances at the door, anticipating a charging elephant. After several minutes, no elephant comes through the door, and the man breathes a sigh of relief.

This joke echoes an experience that therapist David Burns has written about. As a youth, he’d wanted to become a member of his high school drama club. But when he volunteered, the teacher told him the only available job was lighting, and the spotlights needed to be changed. “You’ll have to climb up on the ladder to do so,” the teacher told Burns. Burns was scared of heights, but his desire to be part of the club was greater than his fear. When he climbed the ladder, he began to panic. “Can I come down?” he asked the teacher. “Not until your anxiety has dropped,” the teacher replied. Eventually, his anxiety subsided.

Both the joke and the Burns anecdote describe turning points that occur when someone begins to challenge the limiting beliefs they’ve used to protect themselves. It’s what Buddhists consciously cultivate over many years: putting the soul back in charge.

Shared laughter increases a sense of connection. It’s been an essential part of my self-care, inside and outside the therapy room.

One particularly memorable instance of shared laughter happened a few years ago. I was working with a client, who, after taking off her hat, confessed that she hadn’t washed her hair in days. I could tell she was embarrassed. “Well, if it helps, I haven’t showered today, either,” I replied.  Her expression immediately changed from a look of embarrassment to one of relief. “I love that!” she exclaimed. “And I’m wearing the same pants as yesterday,” I added with a wink. Rather than meet this confession with disdain or disgust, her entire body relaxed as she laughed, not at me, but with me. We were two perfectly imperfect women who’d failed to live up to society’s standards. This sharing and the laughter that ensued deepened our therapeutic relationship.

Learning to laugh at ourselves and our mistakes is a great antidote for social anxiety and perfectionism, which many of my clients struggle with. So, when I stumble on my words in session, instead of getting embarrassed, I use it as an opportunity to model laughing at myself and deepen acceptance of our perfectly imperfect nature.

Research has shown that laughter decreases stress hormones and increases immune cells and infection-fighting antibodies. It triggers the release of endorphins, which promotes a sense of well-being and relief from pain. Laughter also activates the parasympathetic nervous system, triggering the tend-and-befriend response, which is similar to self-compassion.

I’ve found laughter to be a powerful resource for helping clients access joy. Many of my clients have a wonderful sense of humor, but stress, worry, or grief has disconnected them from this essential sense of themselves. By being a compassionate witness and safe coregulator who holds space for their pain, we make room for joy to return. Inviting my clients to recall funny memories or help them savor a moment of spontaneous laughter is a beautiful way of helping them reconnect to their strengths.