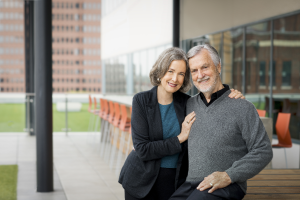 Since Harville Hendrix and Helen LaKelly Hunt first published Getting the Love You Want, readers have lapped up their advice—their landmark book on the Imago Relationship Therapy method has sold over four million copies and remained a must-read for over 35 years. Their first bestseller and its follow-up, Keeping the Love You Find, were written as guides for couples.

Now, Hendrix and Hunt have written the first book on Imago Relationship Therapy specifically for clinicians: Doing Imago Relationship Therapy: In the Space-Between. The new book, out this spring, lays out how clinicians can use Imago to help couples focus on what Hunt and Hendrix call the Space-Between—clients’ unmet needs from childhood and their unfulfilled yearnings within their marriage.

Psychotherapy Networker’s Zachary Taylor spoke with Hunt and Hendrix about their role in shaping the field of couples counseling, and how structure provides the safety couples need to talk without judgment, both in the therapy room and on their own.

Zachary Taylor: How did you become interested in couples?

We had a fight at her house in 1977, and Helen said, "Stop. One of us talk and the other one listen." That stopped us and I was aware that we calmed down and could take turns talking. I became aware that as a therapist seeing couples and doing parallel psychotherapy, I didn't let couples do that. I took that to the clinic and saw that clients were getting better at talking to each other.

ZT: How did you develop your ideas about the importance of how couples use language?

Hendrix: One of my most epiphanic moments came when I was working with a couple who hadn’t touched each other in two years. I was feeling stuck with them because they just couldn’t dialogue.

Finally, I don’t know why, I asked the woman, "What do you love the most?” She said, "Flowers." I asked her husband, "What do you love the most, Peter?" And he said, "Rocks." I said, "Mary, you tell Peter about your love of flowers, and Peter, you mirror back everything she says." He could mirror perfectly. And then we did the same thing, with Mary mirroring what Peter said about rocks. She’d known he had a rock collection but had no idea he really loved rocks all that much. When they got up to leave that day, they were at the door, they spontaneously grabbed each other’s hands.

ZT: And Imago grew out of a new lineage, one you two helped form.

Hendrix: This was in the seventies, when there was no literature on relationships. The individual was the topic of the psychological sciences, and relationships were considered peripheral. The thought was that self-understanding and self-growth were what was critical to being a better relational partner. There was no concept that if you become a better relational partner, it would change your inner world.

Hunt: The only discussion about this came from the feminist psychologists l was reading, like Jean Baker Miller and Carol Gilligan, who said, "There's no such thing as a self, there's only a self in relationship." It's not the self having relationships. It’s the self being in a relationship. We finally moved the theory to the idea that the self is “relating.” The self isn’t an entity doing something. It’s a process itself that is happening.

We were reading about the history of philosophy, and it dawned on US that in the field of psychology, the self was the equivalent of the atom in Newtonian physics. The post-Enlightenment notion of the separate isolated individual is like the unchangeable atom. I remember thinking that we couldn’t say that out loud, that psychologists wouldn’t like it. But we kept working on these ideas, and kept talking about this, and we began to develop what we call the relational paradigm. And to make this short, we were aware that we could not ground the relational paradigm in psychology. There was no discipline for this paradigm. Our ideas were more like quantum physics—based on the idea that everything is relational.

Hendrix: When clients are in front of us, whether an individual or couple or a family, if we look at them through the prism of interconnectivity, the diagnosis changes from something inside them being wrong and needing to be fixed to something about the way they interact needing to change. The focus can then become changing their interactions so that they can feel safe and connect.

ZT: Can you talk about how the Imago process helps couples learn how to use language that their nervous system understands as safe?

Hendrix: The Imago dialogue process is the structured use of language. I still remember every minute in a session now 35 years ago, when I was working with a couple and knew I'd discovered gold and that structure was necessary. The husband said, "Okay, I get it. I can validate without agreeing." And he looked at me and he said, "Is that right? I don't have to agree." I said, "I want you to not agree. I want you to see." Then the wife piped up and she said, "You don't have to agree. Just see how I see it and say it's okay. That I make sense. Because you've been telling me I’m crazy." And he said, "Okay."

They went back and forth, following the structure I gave them, with me monitoring every word so he gets it right. He said what she was feeling made sense. She decompensated, broke into tears. She said, "I’ve never felt seen before in my life." And when she finally got through that and recompensated, she said "I can't believe doing a mechanical exercise, I experienced this."

John Gottman has picked up on mirroring, validation, and empathy, but he doesn’t do it in a structured conversation. He thinks that we do active listening. We also discovered that active listening actually doesn't work because as people are actively listening, they get more and more upset. You have to do something else. What Helen and I say is that therapists have to train couples. You can't just let them free flow. That's like letting somebody swing the tennis racket any way they want to. They will not learn tennis. They have to have the structure to learn.

ZT: Can you talk more about how the structure creates safety?

Hunt: Structure creates safety, because it creates predictability within dialogue. This reminds us of a conversation we had with Dan Siegel. He said, “You know, I figured out why meditation relaxes the body." He said it has nothing to do with religious or archetypal symbols. It has to do with the brain knowing what's going to happen next. I breathe in and I breathe out, and the brain knows the next thing that's going to happen—when I breathe out, I'm going to breathe in. That predictability is what’s relaxing me.

We said to Dan, “That’s why Imago dialogue works. You know what's going to happen next."

Hendrix: That’s one of the things that Helen and I bring to the therapy field—the idea that there's a sequence of sentence stems that help people flow from talking to listening and mirroring, then providing empathy and validation. And that the structured dialogue creates safety. Once, as a therapist, you learn how to show people that structure and show them how to talk and mirror, then you find that the room becomes safe because everybody in the room knows what's going to happen next. I know when I talk to you, you're going to say, "Let me see if I got that," instead of, "What in the hell did you say?" I know I'm going to hear, "Well, that makes sense," instead of, "That's stupid."

If we can talk without judgment, we can discuss anything. But if we have judgment, then we can't discuss anything except the judgment. Because the judgment becomes the threat to the survival system. The most interesting thing WE got out of Stephen Porges and his Polyvagal Theory is that the human psyche has three receptors. Two of them are for, Am I going to die? And the third one turns on if the other two say, No, you’re not going to die. That’s the one that says, Okay, then I can play. That’s what you have to do, make sure survival is not in question, so couples can talk without judgment. Until you're safe, you have to be structured. Once you're safe, then you can begin to be creative. Imago language creates the structure.

Zachary Taylor, MA, LPC, NCC, is a licensed and board-certified professional counselor and the director of continuing education at Psychotherapy Networker.