“Everything Mike Touches Turns to Fun” 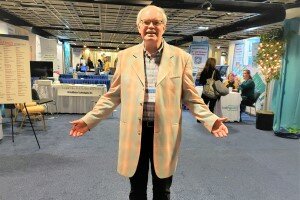 The Omni Shoreham, in Washington DC’s tony Woodley Park neighborhood, is a landmark hotel with a storied history. The Beatles took over an entire floor of the place on their first-ever U.S. tour. JFK and Jackie Kennedy snuck cocktails at its sumptuous bar. And it’s been the site of a dozen inaugural balls, starting with President Franklin Delano Roosevelt’s first, in 1933.

When thousands of therapists descend on the Omni Shoreham every March for the Psychotherapy Networker Symposium, they’re greeted not with the standard big-chain conference venue’s maze of escalators, but a timeless lobby, and the kind of cozy layout and classically elegant vibe that can make the whole event feel like an indulgent, high-end weekend getaway, albeit one with a lot of continuing education perks.

Even the garage is special. For nearly two decades now, during the week of the Symposium, Mike McKenna, Psychotherapy Networker’s advertising and exhibit show director, has been transforming the Shoreham’s indoor parking space into a see-and-be-seen hall of wonders for his beloved exhibitors.

Each year, McKenna’s assembled a devoted crew, donned a fabulous thrift-store overcoat, and transformed the grand old hotel’s garage into an exhibit hall slash party destination like none other in the conference world. Disco balls? Dance parties?? Prizes, prizes, prizes!!! Mike’s thought of it all.

McKenna, an upstate New Yorker who grew up in a small town on the St. Lawrence River, near Montreal, and Rich Simon, the Networker’s beloved late editor and a city boy from the Bronx, long shared an understanding about what it takes to throw a truly great bash. While Rich might’ve started Symposium off by singing show tunes on the big stage at Friday morning openings, Mike played the long game in the exhibit hall with a more intimate but equally important crowd of captive listeners, keeping his exhibitors’ energy up through the days and into the nights with his random doses of soft-shoeing and regular rounds of charmingly off-key serenades.

But it isn’t just his party planning and showmanship that have made Mike the ultimate exhibit show director. Dorothy Smyk of New Harbinger Publications, a Symposium booth regular, says, “In my 30-plus years of being in publishing, I’ve never experienced a more thoughtful, helpful, funny, sweet, exhibits manager! Mike is the ultimate problem solver, and makes exhibit hall challenges easy to manage and resolve.”

When he’s not caring for his exhibitor troops, McKenna’s handled advertising from his rambling first-floor office at Networker headquarters. It’s at the Networker house that his Symposium persona would come home to roost. He’s long delighted his officemates with surprise birthday cakes, steady injections of candy and buttery baked goods, and stories of a wild job he once had as a right-hand man to a high-ranking official from the Middle East, who embroiled this Catholic kid in some highly questionable antics.

Calm in the Storm

Funny and flagrantly caring in a way the muttering writers and editors around him can only marvel at, Mike’s long been the company’s warmest heart, always offering us a space to unload our worries and bathing us all in a glow that’s felt like the comfort of family.

The only subject we won’t consult Mike on is cars. Certainly not after the time he texted us from the middle of DC’s Key Bridge, his lemon of a new, “gently used” BMW stranded in rush hour traffic. Lyford says he and Mike have often commiserated over their shared car troubles.

“Sometimes,” he says, “when the going gets tough, I think to myself, ‘If Mike McKenna can drive a 30-year old minivan with no A/C in the worst of Washington DC’s August heat—a van that won’t drive in reverse, mind you—I can get through this moment, too.”

But if Mike hasn’t been the most discerning car buyer, he has been a whiz at his other actual job: advertising sales. Over the years, he so nurtured his relationships with Networker’s advertisers that many of them stayed on with us at a time when print advertising was in a worldwide freefall. He then deftly moved them to an online and hybrid model, while continuing to charm them in person at the Omni.

Features editor Marian Sandmaier, who sometimes advertised her services in the magazine, might’ve worked from a home office in Pennsylvania, but she was still subject to Mike’s charms from 150 miles away.

“Back in the day, when I ran an ad in the Networker for my ‘side gig’ as a book editor, Mike was one of my heroes. He always tried to place the ad in the most prominent place possible (on the right side of the spread, for starters!) even though it was small and I was getting a special deal because I was a Networker editor. A couple of times I decided I needed to change the copy—what a nightmare for an ad director--and he was so gracious about it, not to mention his can-do attitude in getting the job done.”

Joan Stevenson of Dever Designs weaves the ads and Networker stories and art together for print in the magazine, and has worked closely with Mike to make it all fit beautifully.

“When I think about Mike, I picture a calm smile even in the midst of a storm. Maybe that’s because Mike has saved me so many times over the years, and no matter how small or how large the problem, he’s there to calmly and efficiently handle it. Whether it’s a simple ad change or a major rearrangement, he’s always unflappable, not to mention a master at finding the ads no matter the spaces we need to fill.

The world needs more people with his gift of calm wrapped in a smile.”

The 2021 Symposium was McKenna’s last as the Exhibit Hall and Advertising Director. Though still consulting with Networker for a while longer, he’s handing the baton to Emily Krumenauer, whom he began training months before this year’s virtual show.

Although delighted to be working with the charming and capable Krumenauer, Livia Kent, editor in chief, calls Mike “the Networker spirit animal,” and says she will miss him immensely.

“I’ve never known another human who could take on as many roles,” Kent says. “Driver, party planner, cake decorator, breakfast fairy, holiday caroler, birthday coordinator, not to mention the little matter of his actual job. And he did it all with such cheer and good humor. How many times has he saved me from collapse, whether due to overwhelm or hunger? How many years—decades!—has he kept our little quirky Networker family stitched together by offering a tune, a joke, a good movie recommendation?

“Everything Mike touches,” Kent says, “turns to fun. Often, I’d come into work and find treats on my desk, like a jolly Irish fairy godfather had left them there. When Mike went on vacation, he’d always bring back a beautifully smooth stone from his travels, because I collect rocks. Mike drove me through rush hour to pick up my car from the mechanic when it broke down, on his own time, because he has the kindest heart of any human I’ve ever known.”

When we lost our beloved Rich, it was Mike who took on the gargantuan task of emptying the Networker home and readying it for sale (we’re going to continue working virtually for a while as we decide on a new one), while simultaneously fielding calls from mourners curious to know how Rich had been in those last months—months when the two of them were the only ones left in the Networker’s offices, and Mike helped Rich with the quotidian tasks of life that had begun to overwhelm him.

It’s that focus on relationship, that belief that just because you meet at work doesn’t mean you’re not easy and intimate friends, that struck me, the senior writer of this magazine, when I first began at the Networker.

Mike was in Italy with his hilarious and charming wife, Eileen, when I started, but ever the thoughtful creature, he’d left me---a person he’d never met---a jar full of butterscotch candy and red and white spiraled mints, and a hand-written welcome note. He sent Kent and me countless photos of the Trulli houses of Puglia, which, given his modest phone skills, often arrived upside down.

“What a lovely man,” I thought to myself. I couldn’t wait to meet him. He might’ve hugged me that first day, I can’t be sure, but what I distinctly remember is how the tinge of nervousness that hangs on for those first weeks at any new job, melted away. “Oh good,” I remember immediately thinking. “A friend.”

Of course he would turn out to be the guy that would remember every birthday, force us to celebrate every holiday, plan every work dinner party. I’m hard pressed to remember Mike in a bad mood. When he learned I was taking a bus home, he insisted I let him drive me instead one chilly night. That night turned into four years of being chauffeured to my door.

Dick Anderson, Networker’s creative director, has known Mike from his earliest days with the company and shares that he has long seen him as one of Networker’s secret weapons.

“Mike McKenna’s combination of professionalism and friendship is unmatched. The magazine and Symposium owe much of its success and growth to Mike's strategies and dedication.”

Jeff Dever, who decides the interior design of each issue of the magazine, says, “Mike is one of the most gentle, lovable guys I know. I don’t believe I’ve ever heard him intentionally utter a mean-spirited word about anyone. Even when dealing with a difficult vendor or an ill-tempered exhibitor, his calm, reassuring nature is a healing presence. I know him to be a loving father and husband, as he often shared with pride some breaking family news. He even reached out after the tragic loss of our beloved Rich, just to check in.”

Brett Topping agrees. The two remain close friends after working together during her years as managing editor of the magazine. She calls Mike, “the kindest and gentlest man I know—a true ‘gentle-man.’ A wonderful dad and husband, too. I’ve valued all the special hours I’ve spent in his company. Some that stand out are when he first joined the Networker staff and would bring his son, Gabriel, to spend time with us after school. Invariably, Gabriel would report how much he enjoyed being in the office, and that he thought his dad had the most exciting job in the world!”

Whether or not Mike did have the most exciting job in the world, he always made the rest of us feel like he was excited to be doing the job with us. Made of the kind of love that’s bigger than any role he’s been asked to play, we want him to know that every last one of us have loved him right back.

Lauren Dockett is the senior writer at the Networker.