A Pioneer of CBT on his Journey to “Feeling Great” 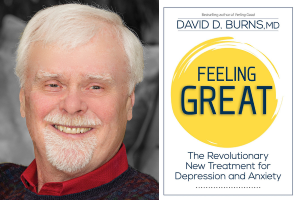 When Rachel, a psychiatry resident, needed help with a patient who felt defective, she sought advice from David Burns, a renowned psychiatrist and pioneer in the development of cognitive behavioral therapy (CBT). Burns ran through a list of techniques Rachel could use with the patient.

“To be honest, I'm asking for help with myself, because I feel defective, too,” Rachel said.

There was nothing unusual about her confession. During his over 40 years in the field treating patients, authoring bestselling books, and running workshops for roughly 50,000 mental health professionals, Burns has observed, “Most of us therapists feel defective in various ways.” During a recent workshop for mental health providers, he asked, “How many of you sometimes beat up on yourself, telling yourself I'm not good enough, or I should be better than I am, or I shouldn't be so screwed up?" The overwhelming majority responded that they frequently criticized themselves. Burns told me, “Until a therapist has worked that out, it can really interfere with clinical work.”

Mental health providers tend to struggle with anxiety and self-doubt for two main reasons, according to Burns. First, he believes there’s truth to the notion that people seek out mental health careers because they’re struggling with their own unresolved issues. And second, people choose to become therapists because they want to help people, but they soon discover that helping people is extremely difficult and they may not be all that effective at it. When patients remain mired in their problems, therapists are confronted— daily, if not hourly— with their own limitations and failures, both perceived and real.

Rachel, for example, hadn’t yet worked through how her violent father, who struggled with alcoholism, had deprived her of a happy childhood and left her feeling defective. Burns decided to treat her, as a way of helping her treat her patients. He tried several techniques. At first, none of them worked. Then, he decided to try the acceptance paradox, one of the ideas at the core of Feeling Good, his groundbreaking book published in 1980, and its new sequel out this fall, Feeling Great, which has already sold over 29,000 copies in the two weeks since its release .

“What if being defective is the best thing about you?” Burns asked.

He pointed out that Rachel had already published numerous articles in prestigious journals. She had a wonderful family of her own. She was the kind of person whose mere presence could intimidate others because of her accomplishments and poise.

“When you told me that you feel defective, I suddenly felt close to you for the first time,” Burns told her. “Maybe you should thank your lucky stars that you're defective.”

Rachel broke down crying. She understood that her feelings of being defective could be a path toward closeness with other people, including her patients. The feeling that she’d been trying to reject because it was painful could ultimately make her a more effective psychiatrist.

The idea that people are anxious and depressed not because of what’s wrong with them but because of what’s right with them is central to Burn’s work. When it was first published, Feeling Good brought the cognitive revolution to the public. At the time, CBT was “dismissed as quackery,” as Burns puts it, and his publisher predetermined that the book wouldn’t sell. But after Burns appeared on the Phil Donahue show and an audience member spontaneously told the audience that everyone in America should buy the book because her son had read it and decided not to die by suicide, Feeling Good catapulted to the top of bestseller lists, where it has remained for more than 30 years.

Now, Burns has drawn on decades of clinical work, discussions with fellow practitioners and mentees, and voluminous research to update and expand the techniques he recommends in Feeling Great, which he calls, “cognitive therapy on steroids.” “The new approach that I've developed is really based on revealing to patients how their depression and anxiety show what's beautiful about them, their core value,” Burns says. Therapists’ self-criticism, for example, stems from conscientiousness, concern for others, a desire to help. Once people hear that their depression and anxiety are part of their goodness, they are, paradoxically, less invested in defending their depressed and anxious thoughts, and more open to reframing their negative distortions. In Feeling Great, Burns presents a cogent, step-by-step guide for overcoming ten cognitive distortions with positive reframing.

When I asked Burns about Feeling Great, I expected to hear about how therapists can use its strategies to help patients. But Burns kept returning to how therapists can adopt its principles for their work on themselves, underscoring, “The growth of the therapist is so critical.”

Rachel, for one, was able to feel more confident after Burns affirmed her feeling that she was defective. Her self-esteem and happiness improved. But no therapy is a magic bullet. Even after her initial breakthrough, Rachel still struggled with conflict and any hint of criticism. If one her patients said something like, “You’re not helping me,” she’d immediately blank out and be unable to listen, sent back to her memories of her angry, critical father. Burns helped her come up with strategies to stay engaged and keep listening. Because Rachel was committed to her own growth, she was eventually able to overcome her instinctive reaction and successfully treat even those patients that triggered her childhood trauma.

Becoming More Than a Technician

“In the early days, when I wasn't succeeding with a patient, it was threatening to me,” Burns tells me. When patients would say that he wasn’t helping, he’d try to prove that he was trying and could help and the patients were wrong to think otherwise. “It was coming from my ego,” Burns says.

Then, one day, Burns changed his tactic when a patient told him he wasn’t helpful. “You’re right, I haven’t been helpful to you at all,” Burns replied. “I’m failing you on empathy. I don’t think I really understand how you’re feeling inside. I can imagine you’re feeling angry and hurt and disappointed and ripped off. I really want to hear what you want to say. Tell me about that.”

The patient began sobbing, and immediately opened up. He and Burns were able to form a strong relationship, and the patient eventually recovered from his depression. After that, Burns began responding to patients’ complaints by agreeing that he was failing them. This disarming technique became one of the strategies he most called upon in both his professional and personal life, and a central recommendation in Feeling Great.

“I made that sound simple,” Burns says. “It involved a lot of change, because I'd been programmed my whole life to be perfectionistic and think that people would only love and accept me if I was spectacular. That part of me had to die for me to find new life.”

Burns built into his practice a concrete way to ensure that he can hear feedback from his patients—part of his constant, decades-long work to make himself less of a technician and more of an empath. Before each therapy session, patients fill out a questionnaire about how they’re doing. Burns then refers to their responses during their conversation. And after the session, in the waiting room, the patient fills out an empathy scale with questions about how well Burns has empathized with and helped the patient. He brings up how the patient scored his empathy the very next session.

“Therapists are afraid that patients won't be honest, but it's the opposite problem,” Burns says. “They'll fail you on empathy, and they'll show you if they're still depressed at the end of the session. The real question isn't whether patients will be honest, but whether therapists have the courage to hear the truth.” A therapist needs both “the self-esteem and the humility to hear where they're screwing up without judging themselves or getting anxious and panicky.” So they can only use the disarming technique, for example, when they’re able to hear and discuss criticism with openness, not shame.

“Many therapists have an intense conflict phobia,” Burns says, based on his decades of training mental health providers. In particular, he says that therapists generally struggle to acknowledge patients’ anger at them. In response to an angry outburst directed at them, therapists are more apt to say something like, “You must be very lonely,” instead of “I see you’re very angry with me.”

According to Burns, not being able to acknowledge the patient’s feeling is a basic failure of empathy, and yet it’s a common response in large part because therapists’ desire to be helpful makes them feel ashamed of their failure to help. It’s painful to agree with a criticism that feels unwarranted, Burns says in Feeling Great, but, in another paradox, whether therapists can tell patients they agree with their criticisms is a measure of how much work they’ve done to ensure their own self-esteem is sound enough for the job.

Meaghan Winter is the content editor at Psychotherapy Networker.